Castelo de Vide consists of a Burgo and medieval Jewry, of narrow streets and winding sidewalks, surrounded by 2,5 km of walls from which reveal magnificent landscapes mostly from its medieval castle; is undoubtedly a place of obligatory pilgrimage in Tourism of Portugal.
The remote past Castelo de Vide little is known, the exception that was captured from the Moors and in 1273, Dom Afonso III donates the town to the infant D. Afonso. Jealous of a well-stocked borders and completely within the UK, Dinis forces his brother to give him the location. It is one king who will build the castle that still exists and gives the town charter. But the fortifications were completed only in the year 1237 prays that the second plate on top of the door ... and the village was so spent Vide Castelo de Vide.
History Castelo de Vide still there to emphasize that it was that Dinis received the Aragonese ambassadors who came to ratify his marriage to Queen Isabel of Aragon.
Only in the seventeenth and eighteenth centuries the village will again be surrounded by bulwark fortifications, including the construction of Fort San Roque (that is currently so sloppy). The medieval fortifications shall be inserted in the citadel and receive barracks, paóis and Wardrobe.
The historical figures of Castelo de Vide
Castelo de Vide is a small town, but still derived from it some of the major figures in the history of Portugal: Gonçalo Anes, Ward Valentine Aljubarrota, and the first who invested against the hosts Castilian, Dom Diogo de Azambuja, one of the most loyal to Dom João II and is buried in marked grave (*) no Convent of the Angels (**) Montemor-o-Velho, the statesman Mouzinho da Silveira, Salgueiro Maia, the main hero 25 April 1974. It was also there that Garcia da Orta began to practice medicine.
Jewry Castelo de Vide
Castelo de Vide had long been an important Jewish community, but after the expulsion of the Jews from the neighboring country 1492 (the establishment of the Inquisition and the publication of the Edict of Expulsion of the Jews of the kingdoms of Spain by Ferdinand and Isabella) its population will have increased to here developed their typical chores: trade, arts and crafts and medicine. These times remain indelible traces: place names (rua da Judiaria, ruinha da Judiaria, Master George Street and New Street, synagogue, in Easter celebrations, one of the village and tourist events in the magical-religious marks inscribed on the doorframes of Gothic doors. 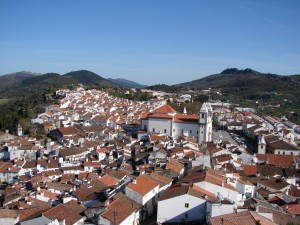 The Synagogue Castle vide
Commonly called “Synagogue”, but with the appropriate name “BEIT-HA – MIDRASCH-SEFARDIN”. In the enclosure to Worship, inside, tem installed the tabernacle, with their respective cavities of lamps designed to “Holy Oils” and the right side of this piece, one would support the scriptures, where the base are deployed seven balls indicator of the six days in which God created the world and the last day, seventh, rest of the work.
A door leading to the first floor features a small concavity called the mark of MEZUZAH, which is on the door jamb. This concavity was intended to save a kit containing a small parchment on which were written some words SHEMA, fundamental prayer of Jewish worship.
All doors are imposed warhead plucking of sharp-edged, logs and FLUTING.
Castelo de Vide has the largest number of Gothic doors Portugal
In the modern part and lower Castelo de Vide the interesting features are as many houses of the seventeenth to the nineteenth centuries, windows with carved apron and iron guards elegantly cut while the steep and winding streets of the upper part of the village and the castle is notes the most important set of currently existing ogival doors in Portugal.
The medieval gates are on almost every street within the citadel of the castle and in the suburbs, the largest number in Jewry Street and Santa Maria. If some are simple ogival doors, without any decoration, many present-decorated both in terms of warheads, as those imposed and jambs.

As decorative elements are employed spheres, logs and FLUTING, together with sharp edges and plant motifs. The fish appears on a single port of the century. XVI (New Street), but there are also stylizations of the Sun and Stars (Rock). Most pointed arches century belongs to. XIV and XV and their total number sixty three.
Castle and other fortifications of Castelo de Vide
The castle north constituting its walls extending from the urban fence.
The walls draw a slightly trapezoidal polygon that shows the Watchtower, A rectangular section, and cubelo that flanked the angle N of primitive patio.
Missing the old walls of the courtyard leg NE, now conforms to that side corresponds to the ancient Barbican this sector, also presented the pit that appears designed in Duarte D'Armas plant.
The Watchtower, Massive up to the battlement level, features a living, which appears as a magnificent living room, octagonal, large rectangular windows and eight pillars, based and helm, that the ribbing arrancam, beveled rectangular section, closing the roof round arches. The Watchtower was presented gutted for many years as a result of the explosion that crippled the year 1705, when the Spaniards occupied the. Later in the earthquake of 1755 again suffered damage.
Should climb to the battlement of the castle to enjoy a magnificent panorama.
“Battlements of the village springs, unfolds on the flanks of the hill range, with Gateiras the roofs shining in the bright sun like diamonds. Overlooking the village will run the saw, forming a hill flanked by a green valley, shadowed by chestnut woods, tinted vegetable gardens and spotted here and beyond the black-green of pine forests. Crowning a ridge of cliffs, sees the shrine of Our Lady of Penha (*), whose lamp, FAZ is that piedosamente burn every night, Like a lighthouse on mountain access. A This, finally opens up, hung the huge height, the "eagles nest" Marvão (***).
But the western side is that the view is more extensive: gets by Spain-in for leagues away, and , lands in Portugal, azulina spot goes to the Serra da Estrela (***). Wool is Castelo Branco, beyond the Tagus, guess whose bed is. Do cathode side, na planura, Nisa; right above a small hill Montalvão; and down the road and Póvoa skeins with its famous menhir (**)”.1

[nggallery id=13]
Urban about drawing a roughly pentagonal polygon with inflections of the wall in the area. Ace Bearing of Vila, misaligned and broken arches, are located in the SE, giving access to Straight Street absolutely intact since the Middle Ages. This runs through the old town to exit on the opposite leg by Ports of San Pedro, but also misaligned in round arches. Here we feel genuinely medieval setting in.
For when the revival of Termas de Castelo de Vide?
In the area of ​​Jewry Street converge the sixteenth century village fountain. Crafted in marble, contains guns castle video and Portugal presented by two petizes. Prior to receiving this excellent recommended source water for medicinal: Diabetes, hepatovesiculares conditions, hypertension, Topical skin diseases, colites, litíase renal, hipocrónicas anemias, gynecological disorders (cf. Yearbook 1963).
After the mineral water was diverted into a building and bathhouse built by Ernesto Camilo Corrodi, the taste of a Portuguese Alentejo house, and today unfortunately, ao discover abandonment. Even today it retains resistant, running water in gardens across the street that borders the village. The building will not be used for thermal and medicinal functions of leisure but it sure would for Alentejo restaurant or bar water. The camera is designed, the long, the construction of a new thermal center, on land annexed to the Source of Aveiro. No doubt aware of its medieval heritage, Castelo de Vide in water has another source of wealth.
The romantic character of the town of Castelo de Vide, which is a village of the fourteenth centuries, XV and XVI perfectly preserved in a single set in the Country; associated with its castle, its walled enclosure, Jewish quarter with its synagogue, its gardens, abundance of vegetation, mild climate and proximity to the Serra de São Mamede, became known as the “Sintra do Alentejo” (this designation is attributed to King D. Pedro V.
6 Places not to miss the remarkable town of Castelo de Vide:
-Castle with the respective panorama of Castle vide
-Jewry with the synagogue
-Source Villa and Spa thermal Corrodi
-Medieval Cidadela
-Praça Dom Pedro V
-Overview of Our Lady of Penha (*)