Loggia of the Church of Mercy of Beja (*)-A little bit of Piazza San Marco in Florence in Alentejo?

A loggia of Mercy Church of Beja is unique in Portugal and is a great example of Mannerist architecture, inspired by the famous loggia of St. Mark's Square in Florence (*****).
It was initially designed for municipal butcher (where they sell meat), contudo its beauty and finesse that was so fast it was considered to be too noble to act as market, adapting the building the seat of the Holy House of Mercy, after being adapted to church.
It was mid-sixteenth century, the Infante D. Louis (son of Manuel I) ordered the construction of a stately building in Beja, in order to then install the local butchers. However, once I started building space, whose traces are attributed to the architect Diogo de Torralva Duke decided to change the destination of the new space, determining that “the big stone building that I sent to the slaughterhouse in the square, which God seems to have desired as beautiful as bad was leveraged to as low-functioning” should be the new church of the brotherhood of Mercy site.
The adaptation consisted of entaipamento with masonry of the arches and add that would be the area of ​​the chapel and where the current home craft.
The church is desecrated, but act as a municipal workshop, in 1927 is constructed of a deposit to the city water supply and even installed on the roof of the church.
The loggia of Beja back to its initial appearance
In 1946 a DGEMN, after withdrawing the little decorative filling, desentaipamento proceeds to the arcades in order to recreate, 400 years later, lines of the early Renaissance loggia de Beja. Highlights of your filling up the pulpit-four boards with scenes from the life of Christ belonging to the main altarpiece, performed on 1564 Hair Eborense painter António Nogueira, encontram that no Convent of Our Lady of the Conception (Beja Regional Museum) (**). In the chancel have today put a local craft good quality.
The building is composed by loggia, quadrangular, the chancel and rectangular dependencies.
The facade is composed by imposing loggia with three arches, a loggia appliance rusticated inspired, engraving by Serlio in reproducing the average floor of the amphitheater of Verona and also influenced the aforementioned loggia of Florence.
"The arcades, than good to the Mannerist taste is deeply marked feature in its verticality, creating a set of ribs (I still remember doing the Manueline language) supported by Corinthian columns crisp classic taste " 1.
Square open floor plan with arches, the interior is very beautiful, consisting of a set of 9 hauls domes supported by very slender columns with Corinthian capitals, Ionian and composite richly decorated. The closure of ribbed vaults stemmed columns is made of naturalistic elements.
On the wall in background, preceded by stairs, side walls and railing, is a portal, with simple classic lines, that was previously placed in the early church. An ashlar century tiles was placed on this wall, as well as side walls that separates the first two last arch of the porch. 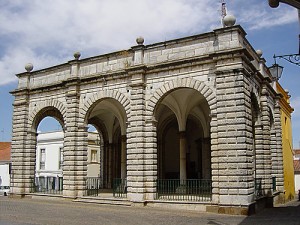 Despite all the hardships he suffered, and which resumed in the twentieth century, the butcher of Beja is an emblematic and beautiful example of transitional architecture between the Renaissance and Mannerism in Portugal.

Urban ensemble of the Republic Square (old Praça Dom Manuel I)
The monumental loggia closed at one end to Republic Square Beja, which began to be called New Square only to be known by the name of the head of its existence, King Dom Manuel l. This king raised the Beja city category and endowed this space, before he became king, but Duke of Beja, a new fountain, Bed and a pillory, that exists today in good quality replica of the original. Much of that hamlet rodeava pleasing was torn by continuous arcaria. The square has become the primary external public space of the city. The arcades were demolished or in part boarded and has recently proceeded to restoration that allowed recover some arches. Also in the square are carried Manueline, from two simple arcs canopiais, to go up another double edged by a cord and endowed with massive capitals. Marking the importance of the Plaza is installed here today the Town Hall. All the space has lots of character and is well recovered, but need to resurrect from the point of view of human.
Next to the patio of the Regional Conservatory of Baixo Alentejo met very recently the largest Roman temple of the Iberian Peninsula. The Roman Forum was between the Republic Square, the street and the street of the Currency Squires.
The discovery was only possible due to the fire, collapse and subsequent demolition of the building of the Technical Services of the Municipality of Beja, located at Rua Street Coin left bare traces of what may be a large and important Roman Temple. Well the people have reason to say that sometimes "there are evils that come as well".
1) Text slightly adapted from Catarina Oliveira in IPPAR site.

3 Comments Loggia of the Church of Mercy of Beja (*)-A little bit of Piazza San Marco in Florence in Alentejo?