-It is made of granite porfiroide

-It was discovered in 1964 and rebuilt near its original location.

- Has tapered shape with phallic.

-It is large with about 3,5 meters

Menhir is a characteristic of the region of Évora datable to the Neolithic Low or medium, has on its top a crosier in low relief, serpentine lines and a lunula, which sometimes are not easy to uncover. Also dimpling (read here their meaning), these are one of the biggest mysteries of world archeology and many people still persist in groping.
The menhir Almendres is located relatively close to the Cromlech Almendres, share 350 meters (less 60 meters than the maximum level of cromeleque that is placed on 1,5 km), This relates to, since it corresponds to an elementary astronomical direction: o menir, seen from the enclosure, that if removed all the surrounding vegetation, indicates the position of sunrise, the biggest day of the year, Summer Solstice.
The Menhir Almendres integral part of a set of exceptional monuments, which highlights the “cromeleque” Almendres occupying the region, a central point, in the context of spot dispersal of standing stones and megalithic enclosures. Examples of the megaliths are Portela Mogo and Vale Maria do Meio, with the pair of menhirs S. Sebastian is Giesteira, our menhir Monte Of Almendres and to Vale of Cardos. 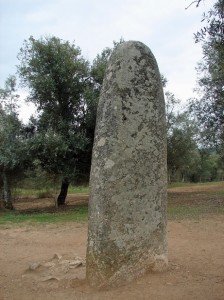 Staffs and naked women in cromlech Almendres
Before proceeding to describe the sight of a naked girl in menhir Almendres and ramblings that raises this event, cavaqueemos a little about croziers, because they are a constant in the engravings of the megaliths of Alentejo.
The staffs were and still are, symbol of power and religious communities common reason, Here agro-pastoral people of Neolithic. This is an issue that certainly evokes the Neolithic economy, where pastoralism played a central role; also reflects the Neolithic ideology, where the man tries to dominate nature with the domestication of animals and plants.
The "staff shale" is one of the most common reasons among the furniture of Portuguese dolmens, mainly in the Alentejo.
Have an invariant form. Made in shale, always ends in a winding in tip top. Sometimes the back can be indented.
It is often lavishly decorated by series of recorded triangles similarity of triangles that will adorn the plates of shale megalithic, they seem to be inseparable. 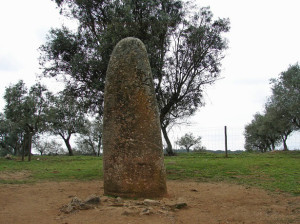 However, unlike the slate plaques, which are abundant, the staffs appear less frequently, which indicates its status exception object.
Its symbolism is obviously associated with management, spiritual power, as it affects the traditional staff of the "Good Shepherd" who helps guard his flock. And today is used as such in the hierarchical members of the Catholic church as staff or groin. Your carrier should then be the driver of community, no priestly type, invested with powers by the gods.
(See image here).
The last time I was here I saw a naked girl appears, neither I nor she hid collected, here because I felt that it was not much less provocative sensuality and lust, Disarming the spirit for the benefit of matter and the senses (Here in the Christian tradition) but a kind of regression to the primordial state, purity, freedom and the abolition of the separation between humans and the world around you; either way and perhaps for cultural bias and due to excessive social velation, nudity still has immense power. For example is this girl that power is immense because while I live it will last me.
The menhir Almendres is declared as a Public Interest.

A comment Menir two Almendres (Évora) (*) and the summer solstice