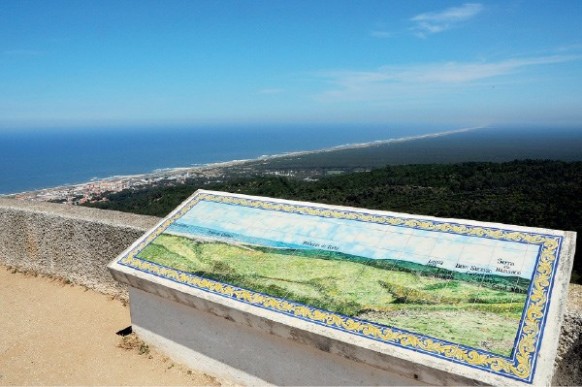 The Flag Gazebo is one of the most beautiful sights of the Portuguese finisterra.

From Espinho to St. Peter Muel, with tiny break in the beach Pedrogão, the coastal strip is low, wide and sandy, interrupting with monumentality in the Serra da Boa Viagem, Cabo Mondego, where the coast becomes high, sheer, carved in the limestone, marl and Mesozoic sandstone and with the significant topónimo good travel, for those on the high seas could see that huge "cetacean" geological.

Located north of Figueira da Foz saw, who became a promontory projecting further, with the sea to the north and south of this accident orographic to penetrate more, We had an intense prehistoric occupation and is an important Jurassic geology, such that raised in 2007 the Cabo Mondego Natural Monument (view here). The Serra da Boa Viagem presents asymmetric, in other words, wider to the west and becomes narrower for this while decreases in height in this direction.

The Serra da Boa Viagem should be a sacred place, as many seem to attest remaining megaliths in the mountains and who are highly degraded with the exception of the Dolmen Carniçosas, it would be one of the Earth's limits for those who practiced the direction of east to west following the sun. Place names like the top of Vela brings us to a lookout post (Sail to ensure), but not despiciente, but remote hypothesis, It is a place where they worshiped Baal and their avatars (the supreme God Phoenician) or one of its proto-historic derivatives (Bel), name later corrupted to Sailing. 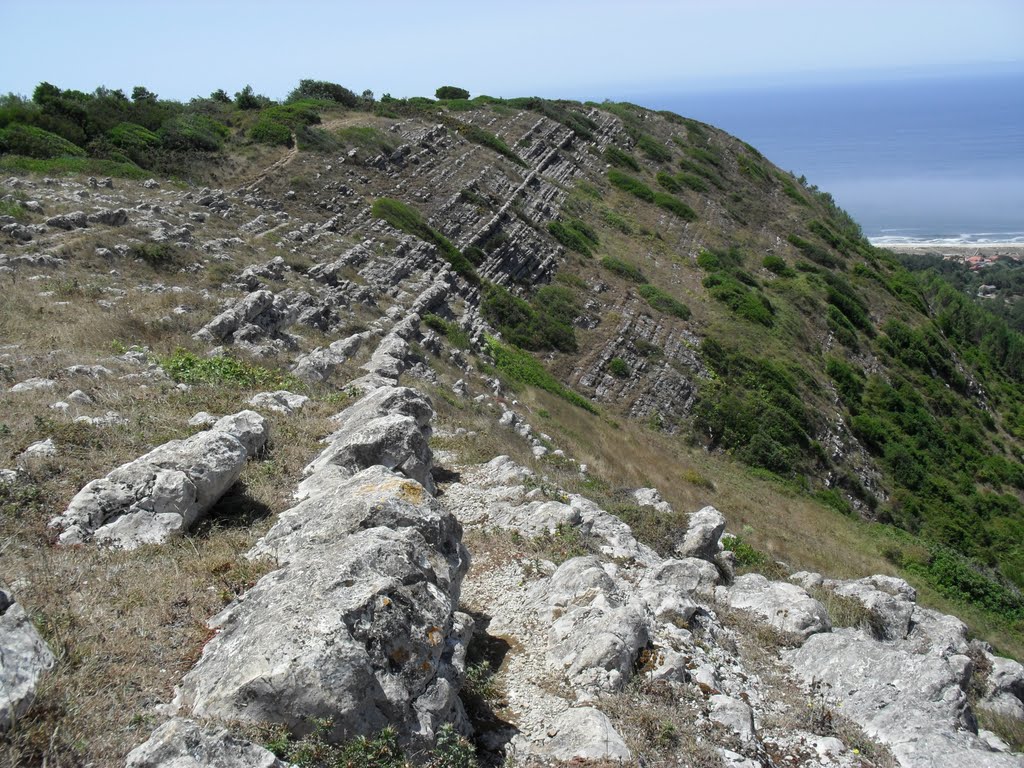 In Flag viewpoint, it turns out that the limestone and marl (richer in clay) differential erosion occurred, due to easy erosion of the limestone marl that, which led to the appearance "steps" of the escarpment. We are in limestone Bathonian (167,7 -164,7 millions of years) formed in marine environments and raised due to the Alpine movements.

This high point with the coast spreading south and north, the watchdog function was chosen and naturally barely visible boats doubtful, perhaps piracy, in the northern part was hoisted a flag, warned that the southern part of the site of the viewpoint of Sailing, here being hoisted another flag to warn the population of Buarcos and Figueira da Foz. Also probably the opposite occurred to indicate the dangers the population of Quiaios.

The site was renamed-Flag viewpoint and from there one can see the entire coastal plain which seems designed arc of sand and sea foam in white line, followed by a dense pinewood, which has been buffeted by fire to the interior, forming region of the Gândara, literary territory of one of the greatest Portuguese writers of the twentieth century, Carlos de Oliveira. We see still Quiaios and the beaches of Tocha and Mira and the mountains of Buçaco and Caramulo. It is worth walking a little more and go closer to the cliff to the corner flag, see a larger scale panoramic. 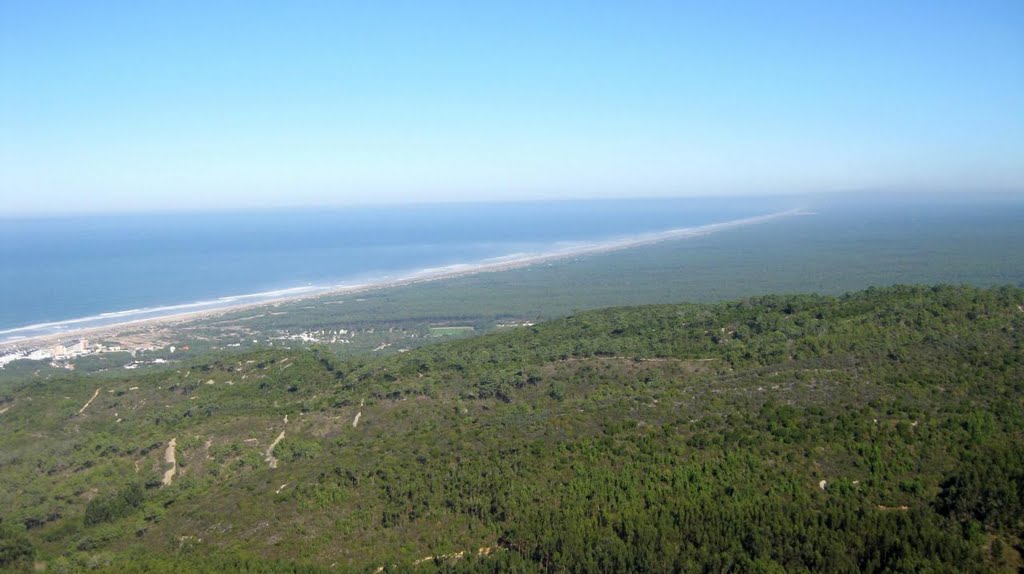 "Associated with this viewpoint we have the figure of a committed forest regent of Leiria, Manoel Alberto King (1872-1943), that, on its own initiative, It proposes turning the saw Boa Viagem in a tourist area and can motivate those who decide.

Afforestation starts there 100 years (1913), It opens the road between Buarcos and is built under the mountain which is now a restaurant.

No wonder he belonged to Figueira da Camera Aesthetics Committee of Foz and worth reading his clear intention and wisdom regarding this dream of becoming the most beautiful coast through the trees, the routes and tourist support. An inspiring visionary for our troubled post-industrial time.

"I knew it, both as far, the seed once thrown to the ground, It never ceases to, at least in the collective effort, bring forth wealth of sources that intelligent man can do to channel the benefit of improving their living conditions.

And so it was that, starting at 1913 the work of afforestation, They became the roads which now traverse the mountains in all directions and covered green pine hills and plains to the north and south, They were only extensive and barren sands. " (King, Manuela., Magna sixth meeting of Portuguese Rotary, Figueira da Foz, 1941).” (1)

The viewpoint of the Flag and the remaining mountains of Good Voyage is one of the greatest Portuguese finisterras and should deserve another affection for all the Portuguese to be requalified.

Additional References- In several articles published in the newspaper Público, Leakage in section, are some of the most beautiful sights of Portugal, which includes the viewpoint Flag (view here).