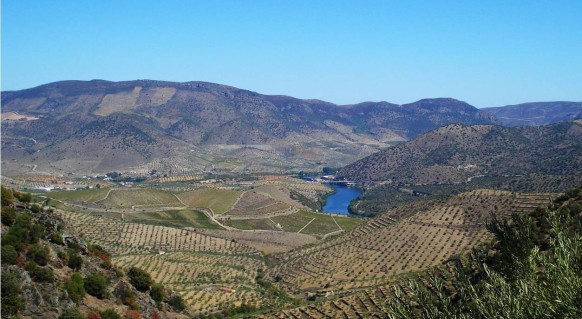 In National Highway 221, Escalhão between and Alva Barca found the remarkable Alto da Sapinha Gazebo.
Here we observe the cease of the inhospitable plateau Spanish, to give the valley of the River Douro and its tributary Águeda; here forms a flood plain broader and less granite cannon. This opening of the valley due to passage of hardest rocks (quartzites and granites) for more soft rocks (schist) and even the erosive work of the Agueda River at its mouth. The quartzite north due to increased differential resistance has contributed to the altimetry local unevenness between the north shore south of the Douro river.

The viewpoint is very pleasant, merendeiro with park and a reader of landscape Natural Park of Douro International that detail the following.
Local News Panel Gazebo Top of sapinha
"Arrived Barca de Alva to, River Douro starts the course in Portugal, going to divide the provinces of Beira and Tras-os-Montes. In this place where its tributary flows Agueda, two bridges are located, a railway, which was part of the Oporto-Salamanca lying off for decades, and a newly built road that ensures quick connection to Spain.
In this grandiose setting, with quartz ridge of rock Durão as background, we observe extensive almond and olive groves occupying almost all of shale land. These crops are excellent soil conditions here, and installation in this region dates back to the late nineteenth century, process that was associated with the writer Guerra Junqueiro, that calcorreou "…this inhospitable land where the cost heather Topping .. "
In terms natural, this area are very important for large birds. Taps-is Watching, eagles and even the shy Eagle Owl, on the neighboring cliffs Agueda has its nesting habitat ".

These birds in their natural habitat, mainly or tap, They are often sighted in your glide, contributing to a magnificent setting. These birds do not destrinçam border issues, unlike the man here did not need to raise walls because river canyons of Águeda and Douro river are impassable canyons, separating the Spanish kingdom of the Portuguese republic. Do we need to build walls between us, when we already have these orographic accidents, deep vouchers, mountain ranges and oceans that separate us?

Who is the Barca de Alva (*), from Figueira de Castelo Rodrigo is mandatory stop here. Indulge in the beauty of the scenery especially during the Almond Blossom.