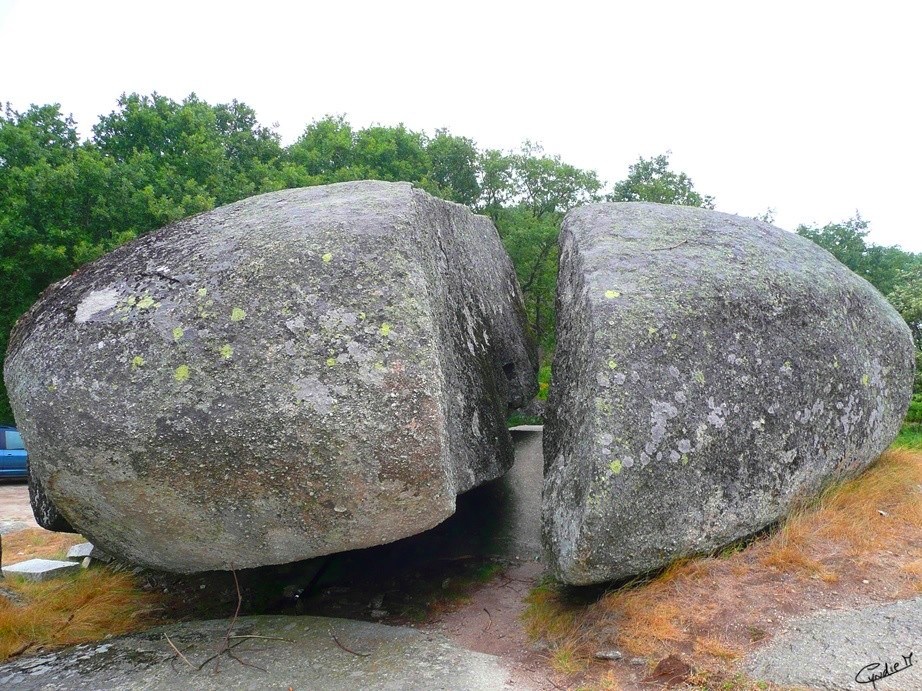 In the village of Bolideira, 18Km Keys, the National Road 103, There is an unusual rock that attracts curious tourists and pilgrimages. It's a huge granite boulder, about 30 tonnes and fans can have a great magician / anthropological meaning. Ciclopicamente was split in half by causes, probably natural in the recent past (historical period or even in prehistory), as evidenced by their type of fresh fracture. Just recently I heard tell that an earthquake would have broken in half. Perhaps, Bolideira because Stone is on the edge of this valley of Chaves, which is part of an important tectonic line that goes to Penacova, near Coimbra, uplifting the Western Mountains, Tras os Montes and in central Portugal, and so Chaves has a high seismicity and thermal waters 76 degrees celsius, but this is another rosary beads, that narrate when describing the keys spa.

The "Stone Bolideira", starting the medium is irregular and more 3 m tall and about 10 m in length and width, with the particularity of weighing several tons, one of its parts, being able to be moved, in oscillating motion, with a push of anyone ". (3)
Your name says almost everything, stirring is why tamper, mover, lick.
The Bolideira Stone is a "stones teetering", with value to use this name with a capital letter. These striking granite outcrops exist in granitic morphology were created in nature by erosion, but is it anyway?
The bulideiras stones are common in granitic landscape of Portugal, highlighting-se, among them those of Alijó, keys, Macedo de Cavaleiros, Montalegre, Candoso (Vila Flor), Sezures and Carrogozela on board, here already in the district of Coimbra.
In the archaeological literature of the late nineteenth century and early twentieth century references they met the Baloiçantes stones as a prehistoric witness the same level of menhirs and dolmens. 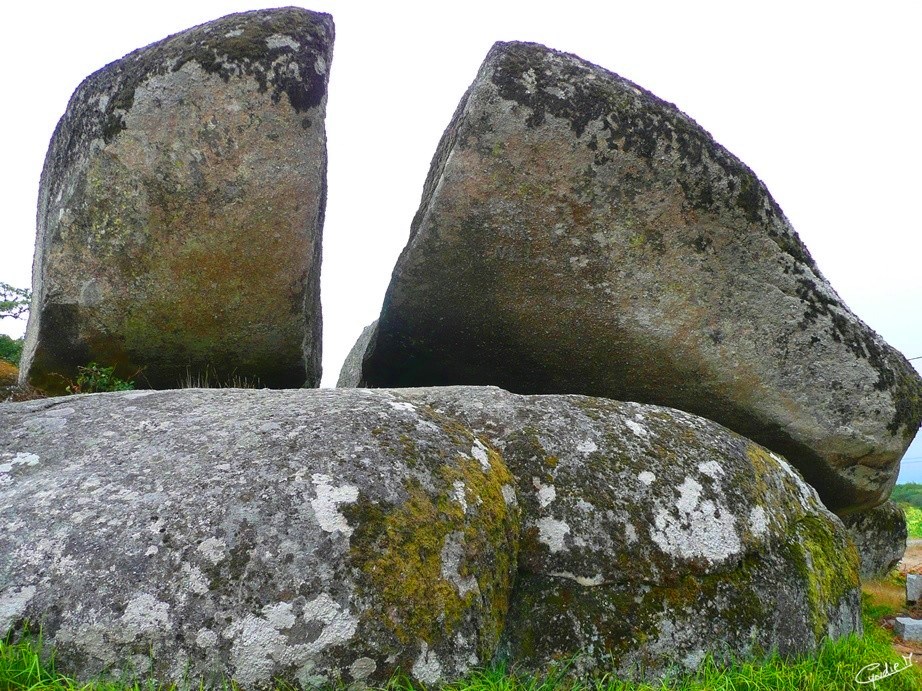 As noted "these stones are the result of natural erosion, but it is likely that some of them, despite the precarious balance that should have have been fond by human hand in order to produce an oscillating effect ". (1)
This is not difficult to prove since the granite forms tend to rounding and the existence in some angular fractures and the flat face, how to cut and requires human intervention to create is an unstable balance that leads to abanarem
"Although baloicem, bulideiras the stones do not roll and, therefore, They do not change place, and this is due to the fact that the respective centers of gravity are below the geometric centers of the respective blocks, as the dolls' always-on-foot ". (2)
One can not exclude the possibility that some of these stones have a magical function / religious, namely, They have been elected as qualified special place because of the strange oscillating property. 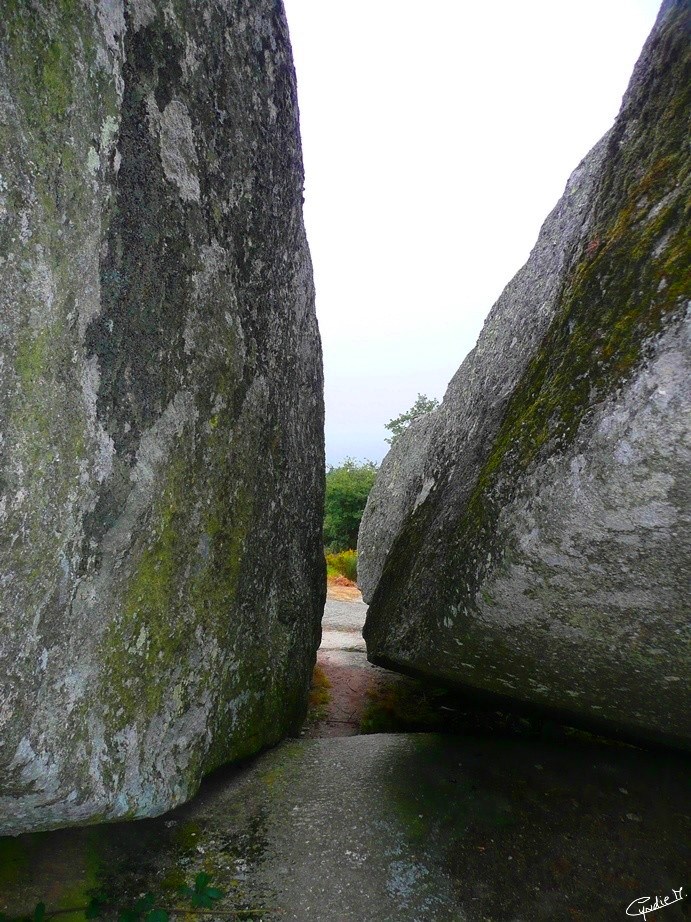 Before the creation of deep geology in the eighteenth and nineteenth, by James Hutton (1726-1797) or Charles Lyell (1797-1875), what it would mean for a human simply a rock with strange and grand way, I put myself to imagine as having no knowledge of geology and explanations for their existence would be the most fanciful.
These "magic stones' in the landscape are not Gods, but for old people and even for some people today, could be an effective way to transcending a divine.
"This has nothing extraordinary, since other stones, these without any dynamic property, would raise the establishment of worship and even shrines, who crossed the prehistoric times to get to our days as places where services are observed litolátricos " (1), as exemplified by the Valentine's Stone in Sao Pedro do Corval (Reguengos of Monsaraz) or Bell Stone, in Celorico de Beira.

Much exists to study these stones Baloiçantes, as do archaeological work in the neighborhood, investigate associated legends, look rock engravings as fossetes or even more elaborate inscriptions, be studied if the rocks are 100% percent natural and has the overlap human afeiçoamento ...
Returning to Stone keys Bolideira, today this attracts thousands of tourists a year, that will test your ability to subject nature; it is essential to find the right place to have the ability to shaking, the meaning is the most significant. The Human Being to develop as a species had the fairylike need to dominate nature and symbolically shake a rock with dozens of tons, however frail or elderly to be the simple mortal, this reveals a huge power, what makes us feel that we are as gods. This power translates into emotional shudder, that is, a "chill in the stomach" who dares to such a deed. Such fascination reveals that dominate the world's gross Stone, afeiçoa we try it to dominate a transcendental playful game, that in some stones may appeal to the oracular and provides confidence prayer. This Bolideira Stone is a litolátrica manifestation of the spirit of the place, reinvested symbolically Man.
Here is the legend of the discovery of Bolideira Stone
"Account that the phenomenon of stone bulimento was discovered one day (in inaccurate date) when a shepherd tending his animals and noticed that a sheep to scratch the horns in stone made her move. To confirm what your eyes saw, Pastor decided to put a small broom stick between the unstable rock and another who was attached to the base. Then confirmed that arched stick when pushing the boulder.
The fact is that this stick is always there for a physical equilibrium phenomenon check and make amaze us. " (2)
It was also said that one of the cracked cracks has the shape of a sole of the foot of a giant, but stories of pantagruélicos giants push for other magical worlds here, for now they are not called.
Additional References:
(1)-Paulo Pereira-Magic Places of Portugal – Earth Spirit-Readership, 2005
In this seventh title of Magical Places collection of Portugal, work that endures as a reference, you will learn all the fascination of the sacred calendars parties and pilgrimages of Portugal: cruise the roads to Santiago; baloiçantes of stones to the caves and enchanted Moorish; appearances of the cults of the saints.
(2)-Great blog about Chaves, to read with delight. (here)

3- https://chavesandaround.wordpress.com/2015/02/25/paragem-pela-pedra-bolideira/
Photographs were also taken from this blog, once in April 2018 I was here and the rain was pouring, failing to uncover where you pushed the "radius" of the Stone. One day there will be longer and the photos of my.

Arganil and Gois, Regions of Portugal, Distrito-Coimbra, All articles
23 de February de 201120 of March of 2015

Landscape in Old Bogalhal (Pinhel) (*)- Place of forgetfulness or reunion?