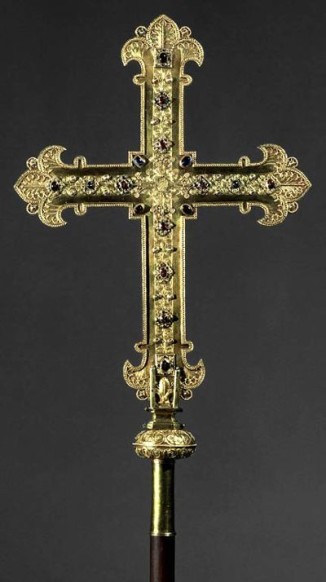 The Monastery of Santa Cruz, belonging to the Order of Canons Regular of St. Augustine, the Roman Catholic Church, followed an established rule from the teachings of St. Augustine philosopher. Its members are called black canons in a reference to the color of the robe habit of using, Crosier or due to their main house in Portugal have been in the Monastery of Santa Cruz de Coimbra.
He began to make in 29 June 1131, around the outside of Coimbra, the site of the royal bath, by Arcediago D. The body.
The main altar of the early monastic building was consecrated, near 1150, by Bishop D. João Peculiar (This blushed Dom Afonso Henriques as king of Portugal. S. Teotonio was the first Prior of the Monastery (and first Holy of Portugal) and other religious order,They were the true spiritual guides and counselors of our first king and this had major role in the genesis of the Kingdom of Portugal. The institution received many papal privileges and donations of the first kings of Portugal becoming the most important realm of monastic house alongside the Monastery of Alcobaça, this belongs to the Cistercian monks.
Got several royal privileges, including the bishop being exempt from jurisdiction. The parish of Santa Cruz was created around the monastery building, based in his church, It is within the scope of convent.

In 1185 King Dom Afonso Henriques choose it for your eternal rest giving it the first Pantheon Royal status, which is also the grave Sancho I.
Among its founding (1131) and its extinction (1834), mediaram 700 years, the monastery staged a huge relevance of history in the policy statement, religious and cultural Portugal and the production and irradiation of knowledge that was the genesis in the sixteenth century, the establishment definitively University in Coimbra.

The extinction of religious orders, enacted in 1834, scheme by the liberal, and the appropriation of their property by the state, It was the greatest crime committed against the National Heritage, by the end of the twentieth century. Now the triumph of the importance of profit, It has been the cause of terrible ailments aesthetics and the natural and cultural heritage of Portugal.
this extinction, in the Monastery of Santa Cruz, much has been destroyed, something has been transformed, but fortunately there is still much, that should be known, defended and released.

Built heritage extant:
-Church of Santa Cruz (***)
Especially here for the stalls Manuelino (***), the church Cloister (***), the tombs of Dom Afonso Henriques and Sancho I (***), the pulpit (***), Church tile panels (*) and the chapel of St. Teotonio (**)
-Church Cloister (***)
-central part of the Manga Garden cloister (*)
-Refectory (Current showroom).
-Barn (current PSP)
-Nursery (Current Liceu Jaime).
– Garden Mermaid (**)
-College of St. Augustine (or New College or College of Wisdom) where now is the Mercy of Coimbra and the Faculty of Psychology. (**)

-Some of the most notable works of art of Coimbra and Portugal and that are spread all over the country, but mostly in the Castro Machado Museum belonged to the monastery. Examples are the Black Christ sculpture (***), The Last Supper of Hodart (***), and the famous Deposition from the grave (**) the sculptor Jean de Rouen.
Also in the monastery there Pentecost frame of Onix (**), Arm-Reliquary (*), dalmáticas (*), Bound eighteenth century book with the story of the Martyrs of Morocco. Also scattered Coimbra and Lisbon, are pictures of the polyptych, made in 1525 by Christopher de Figueiredo (***), for the altarpiece of the Church of Santa Cruz de Coimbra. Another remarkable work is the gift Sancho Cruz, also in the National Museum of Ancient Art .
It seems that the Monastery of Santa cross should be interconnected with other institutions, to somehow have access to and dissemination of their works of art scattered Coimbra, Portugal. It seems that a visit to the Monastery of Santa Cruz will have to interconnect with the Machado de Castro Museum and the National Museum of Ancient Art, Lisbon, to become complete.
Impressive to know that in the Monastery of Santa Cruz was a huge building site where they worked master builders, sculptors, painters, carvers, goldsmith, silversmiths and tailors and abroad – There lived the great national teachers, many outsiders, the Late Gothic, Renaissance and Mannerism passed through Santa Cruz Nicholas Chanterene, Machim, ःodrt, Boitaca, Diogo de Castilho, Diogo Pires-o-Novo, Vasco Fernandes, Fernandes Garcia and Christopher de Figueiredo, Carlos Seixas or Luis de Camoes.

Your scriptorium It was the most notable of Portugal, especially in the twelfth century and it left valuable manuscripts, many of which are today in the Municipal Library of Porto, where they were taken by Alexandre Herculano and other collected by Costa Bastos in the Torre do Tombo National Archive. Among the outgoing codices of their scriptorium tell if, for example, a version of the "Book of Birds" (today located in Porto Municipal Library). He owned a monastic school, where granted degrees, similar to what was done at the University of Coimbra.
But not all roses because long gone both built heritage, as in the artistic heritage, spiritual and philosophical, It is the case:
-Reception Building Monastery, which contained a cloister and where now installed its buildings City Hall.
-The entire garden that went from the Cross of Cells, down the avenues culminating in place of the church.
-Almost all around the monastery which includes the monumental Romanesque tower of Santa Cruz, demolished in 1935 (read it here).
– The entrance building, receiving and contained over a cloister.
The monastery domain Santa Cruz, not only was Coimbra, it still close to the city, where today there is a private university Vasco da Gama, was the Monastery of São Jorge de Milreu and Montemor municipality Old convent of Almiara, which is abandoned and degraded, and even in the week, in Melgaço I was in the Romanesque monastery of Paderne (**), he also heritage of the Monastery of Santa Cruz.
– And I do not forget that Sofia street Genesis is also closely linked the Monastery of Santa Cruz de Coimbra.
If you want something truly love, you have to know you, so it is my duty, write all this true European treasure that should be part of the World Heritage list.