placed 6 the September the 2010 by Castile

It stands in the town of Beira Celorico Fontanheiro of this remarkable Boulder Bell, that attracts and seduces by its shape, dimension and mystery. Long men saw in him what today still feel so your back, installed a rock called necropolis Sao Gens. And even though today it is but a mere block pedunculated fond granite by weathering agents. Still others have seen (and see) it an alchemical esoteric-rock; but here the geomorfólogo just see a wonderful natural outcrop.
A Pedra do Sino is an emblematic case of litolatria. It's such a prodigious rock that may have been the target of magical-religious veneration ownership. Perhaps prehistoric men encarassem this monolith as a monument designed by other human ancestors or even gods. 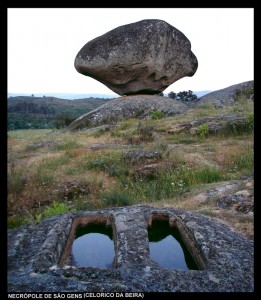 The place of St. Gens had occupancy between I-II centuries AD and twelfth centuries XIII, as evidenced by the rare traces found in its soil, and where an important Roman road passed, which can be seen in Celorico Beira and Bridge Washerwoman (now fully medieval, but which may previously have been Roman).
The Boulder São Gens Necropolis and the High Middle Ages
Around it there is an extensive medieval necropolis from the sixth-seventh century to the XIII-XIV centuries; while I look in the "baroque" unspeakable signs, Look for not stopping often in boulder Bell; seduces his unexpected beauty, anomalous, in his strange balance.


Here dimples that some esoteric authors declare to be artificial, but which are natural; ali sim, there are two principles excavated in the rock- a circular and the other subtriangular- which may have served a ritual function, even before the builders of rock graves. There a great lagareta. And watch again Pedra do Sino…
If already detected 46 burial cave, from multiple forms; not fail to move me to put in pairs, trying to perpetuate beyond death to a love affair affection that might have been grateful and that both sets even our becoming; also the graves of children reclamadoras of our compassion towards the blind force of natural injustice (Some call him the divine).
The hagiotopónimo is also noteworthy, because St. Gens, ie Sao Giao, puts hypothesized the existence of a temple forebear Christian, resonance with Visigoth.
It would be nice to be made further archaeological studies, it could reveal much of the place.
The "eternal" precarious Boulder Bell, and shall always exercised a great fascination about human consciousness. It is this superb monolith.
Well Hajam human builders and their natural supporting the Boulder Bell and necropolis of Saint Genes. In the coming weeks here also put two nearby prehistoric sites reclamas esoteric. The menhir and necropolis Maria Valley Country Anta and the Chapel of Our Lady of Mount in Penedono.