After the first article left the Core of Canada's Inferno (**), follows the extraordinary core of the Bank of piscos (****), not only by archaeological, but also for the exceptional landscape, mainly on the seasons "almond blossom"Or at Primavera.
First we traveled "all terrain", and then walk, through a dream landscape; the core Ribeira of piscos is itself an unforgettable experience the dawn of humanity.
The first time we visited the nucleus was in the company of archeology students from our city Coimbra, where we would be cicerones to the geology of the region and with our guide Archaeological Park Vale do Coa (*****), Tried and Gabby, scholarly in local plant, established a fruitful dialogue. If doubts, the "How" and "When", are more or less answered, "Why" are at the mercy of speculative science and dream. 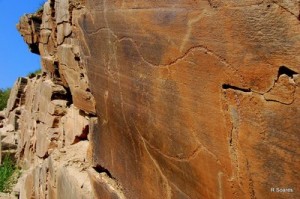 The nuclei lie in the mouth of the stream of Robins, on the left bank (tectonic associated water line upstream mega fracture Vilariça). The walk is exquisite, we are surrounded, by a colorful kaleidoscope of wildflowers francs aromas and subtle.
In the rocks is possible to see the most well-designed animal of the whole complex: some horses run in threadlike in great detail (note the eyes, a crina, helmets) and a wonderful sense of perspective, showing very well positioned and provided all the legs.
The Man Robins and his giant phallus
In another panel observed, a rare Paleolithic representation of an anthropomorphic figure, a do “Robins of Man” (worldwide must be at most a dozen). Recorded and coated by threadlike technical, with 63 cm and 22 cm in length, about 10000 a.C., com crânio outgoing neck, mouth open and enraptured inordinate sex ejaculation. A reminder to future generations that sexuality is a vital necessity pleasurable, um transcendental act, being in some societies also a religious act. What would our coeval photographer communicate?
The "Man Robins" overlaps with several figures (horse and aurochs).

The "sensuality" Paleolithic continues with the observation in another panel of one of the most beautiful and well known representations so far encountered: are two horses to namorarem, caressing each other with their snouts, figures who looked more bulbous area of ​​the rock to give a sense of volume.


You extensive groundwater Peaceful River Coa, the 6 km from its mouth, and after passing by a partly submerged and ruined mill, found three large aurochs two meters. Your recording required the construction of scaffolding, and their large size suggests they were meant to be seen from afar, reinforcing the theory of panels as flags frontiers or markers.
A continuous conversation interesting, what is logical whole, com a guide, of nome Helena Garrido; accustomed as we were to look at the rocks, descortinei a small figure painted ocher; this was a prayerful Neolithic. According to Helena this figure is already cataloged and many more are distributed in this sector. The history of this valley did not finish in the Paleolithic ... 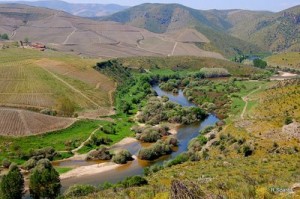 The former, stop the ruinous Quinta das Olgas, but still with good stonework. I ask to stop the car to pick a photograph. It's a moment in my memory because life is very beautiful moments.