Skip to content (Press Enter)
Home>Regions of Portugal>Distrito-Leiria>Nazareth>There is a relationship between the world's largest wave surfed on the northern beach and Serra da Estrela?

A few months Nazareth walked the mouths of the world because American surfer Garrett McNamara surfed the biggest wave ever in North Beach (Nazareth) (**).
Now the Hawaiian surfer entered the Guinness World Records with the same where the 30 meters- the equivalent of a building 10 floors, ridden on 1 November 2011.

Surfer also won in the category of "biggest wave" in the Billabong XXL Global Big Wave Awards, a kind of Oscars of surfing.
Few people know is that the formation of large waves on North Beach are associated with sudden gap caused by the "Nazaré Canyon" geological fracture that crosses the entire Portugal from north to retire in about Ocean 170 km long. The same is responsible for ubérrimo Valley Vilariça, lifting of the Cordillera Central (the Serra da Estrela shapes Zêzere valley), Goshawk and Lousã and limestone massifs Condeixa Sicó-Alvaiázere) continuing to Pombal.
The gorge of Nazareth is a kind of immense valley submarine begins to set at about 500 meters from the coast and atinge five thousand feet deep and 150 meters off shore and extends along 200 km. This submarine canyon causes major changes to coastal sediment transit level, since this is a true valley sink to sediment from the north, by littoral drift, which explains the absence of large stretches of sand on the beaches south of Nazareth. 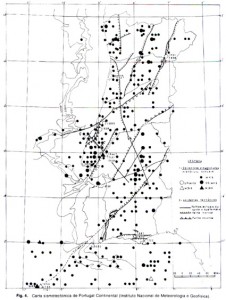 In short, the Nazaré Canyon is a giant topographical accident, unique characteristics and plays a leading role in regional circulation of the water masses. Its characteristics favoring the mass transport (sediments) and energy between regions of the inner shelf and the deep ocean. For this razão, among other types of events, occur ripples of large amplitude and period we know so well…and who give so spectacular moments as outstanding wave and other annexed thereto are hereby.