One of the most beautiful roads in order to see the "Almond Blossom"It Freguesía of Almond and the road that goes to your station along the Douro river is magnificent. They're twelve kilometers, full of interesting site, and, between February and October, will be perpetuated forever in our memory.
Stayed February are the radiant almond blossom, that in this region between Best Castle and Almendra station- are ms fine of Country; spring will see and feel a whole plurality of tones and fragrances of Mediterranean vegetation; summer, sweltering heat, and autumn vineyard know some of the best wine estates in the world (a Quinta da Leda) and always the Douro, idyllic river that is a dream realized in a stunning landscape.
The middle of the path transposes up, pleasant place, the shore of Aguiar. Together is a chapel dedicated to Our Lady of the Meadows, once important center of pilgrimage. Let us drink your fresh water source, very mineralized (which deserves a hydrogeological study).
St. Apollinaris and mythical Cividade of Calabria
Let us look for the huge bulk of Mount Callabria, surrounded by his gigantic vineyard. In this top now inaccessible by Quinta da Leda, pertencente to Home Ferreirinha, There are remains of walls, according to some authors, was the seat of the Cividade Calabria, office of bishop in the seventh century, whose prelates would have taken a seat in the councils of Toledo 621 a 693, having been the place of coinage of the Visigothic kingdom. This location had extraordinary importance in the Swabian / Visigothic period. His last bishop, San Zeno, would have been killed by the Moors around 717; but the people tells the legend of the martyrdom of St. Apollinaris, supplying it with great devotion across the Douro, in Urros (*), which would have gone into his body dragged by bulls. The hypothetical Calabria there are only vast stretches of wide walls of schist and quartzite of about 2,20 cm in length, having been referenced in the enclosure fence much archaeological (mosaics, bricks, coins, building stone ...).
In the vicinity, have also been found traces of Roman presence as a Latin tombstone chapel of Santo Cristo, Site of the Aldeia Nova, transferred to the chapel of the same invocation Barca de Alva (*) onde hoje will discover. Probably at this time would be a simple castellum.
On the slope facing the Douro are traces of iron and gold exploration, probably from Roman times. These ruins are an interesting puzzle archaeological and legendary, that deserve to be studied deeply and put at the service of national tourism. The landscape that give discerned is magnificent (repeat that the site is currently inaccessible, up to intrepid travelers). The reason of its inaccessibility relates to the existence around him the extraordinary Quinta da Leda.
Here also makes Barca Velha
Purchased in 1979, year that began planting vines, currently approximately 85 hectares, with recommended Touriga Nacional, Tinta Roriz, Touriga Francesa, Tinta Barroca and Tinto Cão. In the year 2000 began operating a new winery that allows, systems with modern winemaking, preserve as much natural constituents of grape. The winemaker responsible, José Maria Soares Franco, selected and determined for that type of vinho each lot will be used. It follows make, for example Quinta da Leda, the Callabriga and the largest Portuguese wine named the mythical Barca Velha (this year 2006, is their year, with harvest 1999); The total production of the crop 1999 not reached the 30.000 bottles. This Barca Velha was made with grapes from varieties Touriga Nacional, Touriga Franca, Tinta Roriz and Tinto Cão. With this release, comes into existence only 15 declared harvests from Barca Velha 1952, which only reinforces the status of legend that wine purchased. Only had the right to appoint Barca Velha harvests 1952, 1953, 1954, 1957, 1964, 1965, 1966, 1978, 1981, 1982, 1983, 1985 (run from the caste Quinta Vale de Meão (*)), 1991, 1995 and, now, 1999. This farm produces wines from the Douro superior, of great complexity and elegance, exceptional symbol of wealth and modernity of great Douro wines and whose fifth, Despite recent, wonder that has not been inserted into the Alto Douro Wine Region (*****)- World Heritage. 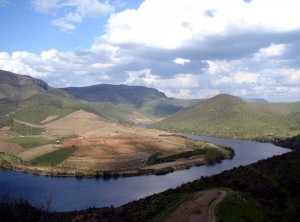 Following Thursday succeed in these great local open spaces, where the Mediterranean vegetation has taken over the space and where partridges abound, Rabbits and hares, fleeing on the wheels of our car.
And the magnificent Douro; opposite, Tower of land Moncorvo, in Grand Meander, now carpeted with vineyards in the background and the small station Railtrack disabled Almendra- small crate ghostly scare at the same cozy, ternurenta-long nostalgic of a movement that today has. Let's walk to the effluvium, with its effulgent waters, and there we stay quedos and always mute the brood this amazing landscape.
Olivedos, vineyards, almond and lofts; Calabria myths and mysteries; Quinta da Leda and the Barca Velha; Chapel of Our Lady of the Field and its waters, the shore of Aguiar, the Penedo Durão (**), Almendra station and of all the landmarks Douro, the river with its silence and beauty scenographic refer to spring earthly paradise; but, that the similarity of what happens in Alentejo, turns into hell scorching in summer.
I have read much in the interest of regional entities, including the spanish side reactivate the entire line from the Pocinho to La Fuente de San Esteban, concrecta works but there is nothing on the ground but we still have hope for the future, this beautiful stretch of the river Douro back to serve not only the local population, but as the thousands of tourists every year visit two UNESCO heritages of the region: the Coa Valley Archaeological Park (*****) e o Alto Douro Wine Region (*****).
A visit to the railway station Almendra makes us more pantheistic. Despite its remoteness we always keen to return.