Overview of Our Lady of the Castle Urros (Mirandela) (*)

"The Serra da Forca is far and ugly. Have pasture but worth? The last lost so much left there crying, both unburied corpse, punished much soul, that even the litanies of spring deviate and go wide. But it is in places so that the people cursed, perhaps to preserve the gossip of reason, like planting beautiful and exciting legends. And go to invent tesoiro that there was a wilderness of cursing. It is found that it was difficult. Buried between penedias, saved per thousand ghosts, who would have the courage to try the company? Nobody. And the hill there was still excommunicated blue in the distance, wild and haunted ".
New Tales of the Mountain, page 109, 8Edition- Miguel Torga
It is this beautiful wild landscape; happens to be around, the shale slopes boleado, nudity protected by an almost continuous blanket of weeds and undergrowth aromatic: gorse, estevas, interrupted here and there in its monotony by tilled land and by patches of almond and olive groves. And in the background the beautiful panorama of the River Douro. Here ends the quartz ridge, this huge wall that builds on the right bank of the Douro region Ash Sword of the tape – Mirandela. Although the rocks were older Ordovician orogenic its fantastic structure is due to the Alpine movements.
The chapel is dedicated to Our Lady of the Castle (also known as Our Lady of Joy), whose pilgrimage takes place in Pascoela. It was built on the ruins of coeval populations as evidenced by the remains of pottery found from various eras, medieval, Roman and Iron Age. 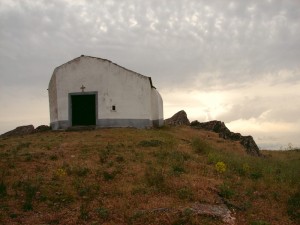 A comment Overview of Our Lady of the Castle Urros (Mirandela) (*)