I love to swim in Algarve waters, but run away from the hubbub and just install me at the beach 17 hours onwards, if possible isolated on a paradise island Ria Formosa Natural Park (***)- where paradise is just our (just walk only a 15 minutes and afastamo us the area of ​​greatest density of holidaymakers and we were alone – for beneficent state of mind). Here when we swim, sometimes fearlessly, away from the shoreline, always have in mind that great Monte Figo as a safe guide. And even at night, ao luar, in seawater, somewhere distracted Cosmos (and it is when he is more in us), the figure stands, getting on us the notion of the unspeakable. We feel lost and redeemed- there is Lucifer on Earth!
Their presence, (so forgotten is the inattentive tourists, with looks to the beach), has been a beacon, for all the people who habitaram the Leeward Algarvia. Among the many attractions that are offered to us in the Eastern Algarve, the Monte Figo is between eles.
The Monte Figo formed due to the tensions of the Alpine orogeny, creating this anticlinal limestone lithology Middle Jurassic age.
Before necessarily going to Monte Figo, we go through Moncarrapacho, bonita aldeia, with an interesting church of the Renaissance (especially your portal) and if we want to stay in the area we have two notable tourist accommodation that we recommend: a House of Calm and Colin Green & Country Club.
Let us return to the road is narrow, but tarmac, always rising, their horizons will be dilating, were entranced by so much visual range, much light, that the sunrise and sunset, acquires superlative hues.
One of the most beautiful sights of the Iberian Peninsula
From the top of his 410 m altitude harvesting is one of the most stunning panoramas in the Algarve (rivaling the FOIA Serra de Monchique (**)), and I venture to say, of the Iberian Peninsula. Covers half the Algarve coast, continuing north to the Mesozoic sedimentary barrocal and xistentas barrier of mountain ranges from the coast: the mountains of Monchique (this syenitic), Spine of a Dog and Cauldron.
Viremo us to the sea, infinity with the string of coastal towns: Albufeira, Quarteira, Vale do Lobo, Almancil, Faro and Olhão; these two lie at our feet. Ali as Roman ruins of Milreu (***) e o palácio Estói (*); Now there is the most beautiful Algarve town-Tavira (**), continue by Old cacela (***), Manta Rota, Height, Monte Gordo, spent the Guadiana, here's Isla Cristina. 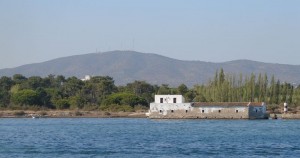 But what really underscores the view of course design Natural Park of Ria Formosa (***). Are about 60 km from the Algarve coast between the peninsulas of Ancão (Vale do Lobo) a Manta Rota, with 18000 ha de ilhas, marshes, beaches and lagoons and their 5 islands: Deserted (***), Breech-Lighthouse (***), Armona-Fuseta (***), Tavira (***) and Cabanas (**), and they are all there, extended, havens of warm water and Serene.
Shrine Proto-History and Classical Antiquity
I now ask the reader to know who was Avieno? you know the work of "Why the Sea" or known to Avieno appointed Monte Figo as Mount Zephyr?
Then know that the reader Cerro de San Miguel, due to its extraordinary location and since the man Marcia, was an important maritime sanctuary of mountain also constituting a natural beacon navigation and meteorological oracle. So it was during the Proto-history and classical antiquity one of the most important mountains of the Western world maritime reference, controlling the flow between the Atlantic ocean and the Mediterranean, a helpful maritime visibility about 60 km, covering from Praia da Luz (**), bar à Huelva.
Even today in Ayamonte, the Monte Figo traditionally serves as an indicator of the state of the sea to fishermen. When is perfectly visible outlet to the sea is considered safe. When it is partially or totally cloudy, is danger signal, boats should not drop. 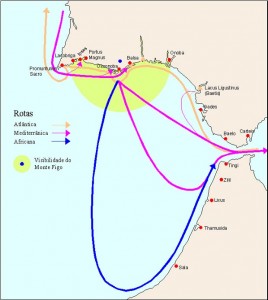 In the Algarve coast Phoenician communities existed and space could be associated with their deity Baal Saphon, perhaps even before the eighth century A.C.
Avieno appoint him Zephyr Mountain, which is no more than a later Greek exegesis of the West Wind, Zephyr deified, ie the Phoenician Baal himself, here, as god of storms and winds that could lead to failure or bolster a maritime design.
Its use as a sanctuary during Roman times is proved by the existence of a Roman road, that he walked up to the top and withal the important Roman city of Balsa (located near the Torre de Aires 11 km), being a place of worship to a God of this city still unknown.
Lucifer and the Christianization of space
Somewhere the Monte Figo, must have been for many centuries, sanctuary with one headlamp beam of constant light, dedicated to Lucifer / Phosphoros, deification of the planet Venus, entity conducting the dead and Sailors, bearer of light in the darkness. Sometime during Christianity, the cult of the Archangel Michael came to replace the pagan cult, but keeping the psicopompas assimilating functions as a protective conductor and the newly deceased souls.
Remained so throughout the centuries religious functionality Hill, dedicated to protective deities of sailors: Baal, Zéfiro, Lucífer, Under, St. Michael the Archangel (who is now a chapel) God and the current- technology, with a large central telecom.
San Miguel is a symbol of the Christianization of pagan places. Its iconography speaks for itself: The Archangel, sent from heaven step and submit the dragon or serpent, symbolizing evil but paganism. And the chapel of San Miguel still exists on top of the Monte Figo.
This is certifiable in many sites with chapels dedicated to him, I remember him in Portugal Chapel of St Michael's Mount (Alandroal) (*), sacralization of the most pagan shrine dedicated to the Lusitania categorized ENDOVÉLICO, or for example in France Mont Saint Michel (*****) in Normandy.
Two more notes: Head in the area there are some caves and potholes that could have some tourist interest, however I know nothing about this possibility.
O topo do Monte Figo is littered with unsightly antennas constituting a telecommunications exchange, that during its construction must have destroyed many archaeological remains. However there are still remnants of buildings, that would probably be the original hermitage, but some of them seem to have a circular shape. Only an archaeological intervention may however clarify its meaning. And friend, already been to numerous times already to Algarve Monte Figo?

Regions of Portugal, Distrito-Castelo Branco, Idanha-a-Nova and Penamacor, All articles
30 of March of 201324 December of 2014