We've been writing about the remarkable sites of Tras-os-Montes, because I believe that we should spread all our remarkable heritage and the choice for us is almost indifferent, so we can write about Monastery Battle (*****) how about Pillory of Torre de Dona Chama, though I know that with this I will have less traffic, but let's stop with further ado because our choice is associated with ethical soundness Portugal Remarkable and uncompromising defense of the turismo cultural.

Previously we wrote about two remarkable locations that had Berrões (verracos) and ambos no distrito to Watch:

With the popular name Berrões or Verracos, are stone sculptures (almost always granite) Iron Age or even longer representing the Roman era, Pigs, boars, Bulls and Bears.
Of the approximately 400 known sculptures, the most frequent are the figures of male pigs. Berrão The term was inspired by the term used to designate the boars. The dimensions of berrões can reach two meters, however there are several others that contain as little as 30 inches. The area of ​​the culture of shouting situated up in the northeast of Portugal and extends to the provinces of Cáceres, Zamora, Avila and Salamanca in Spain. 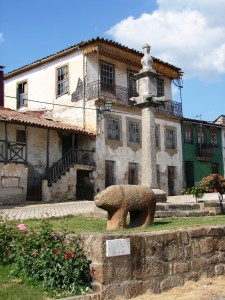 Pillory of the tower Dona Chama

These sculptures have been found in locations that already existed in the Iron Age and which still remain (ex. Torre de Dona Chama) or in old forts or even from other relevant sites (such as grasses). That would tick marks for the key economic resource and it is thought that they would also, a symbolic value, as protective presence of cattle and localities. Were also used as funerary monuments in Roman times.
Almost certainly was the berrões be used for religious events. The sculptures represent sacred animals who worshiped; as the inscriptions suggests that some of these sculptures exhibit.
We have for example the translation made of the inscription, I Iberian Supply Chain, berrão do suporta Las Cojotas that this theory: “Pig-God brave protector of the city of Adorjan” or the temple dedicated to Perforation of Berrão Miranda do Douro which unfortunately was destroyed.
A further support this theory some even boast "fossetes" ie rounded dimples probably used for any ritual.
Are famous in literature Verraco the Bridge of Salamanca (**), picaresque novel which begins Lazarus de Tormes or Bulls Guisando, that still little visited, from which Isabel the Catholic was proclaimed heir of Castile and, to be mentioned in the Sun Quixote, for those who know me my favorite book. Route alias that did and will do no "belly" but with idealism.
The statues have led disappearance: has been affected by erosion, their noses were broken by religious fundamentalism, finally are always bumps in 20 centuries.
In Portugal would be associated with the pre-Roman peoples of Zoelas and Vettones. Blog Stones with Memory can read a great article on Berrões in Tras-os-Montes.
In the city of Bragança and Torre de Dona Chama berrões are related to the pillories, but in relation to the time of construction, one has nothing to do with each other: The pillories are medieval and later and quadrupeds are Iron Age.
Along the pillory Dona Chama, Built in granite is a sculpture representing a pig, which gives the people the name Berroa and Ursa. Has length 1.60 m high 0,92 e of length 0,36.
The statue probably have been the lot of S. Bras where there was once a castro. Ler here on in Legend of Dona Chama.
The pillory Tower D. Flame was erected in the sixteenth century and is based on a square punch three steps that make up the sloping ground. The base is square and topped with a beveled square prismatic part. A coluna, Plain octagonal shaft and irregular sides, is slightly narrower at the top than at the bottom. O capitel, cross with equal arms, shows in its depictions of extreme animal heads. The cobblestone shot presents on one side the arms of Portugal, and is surmounted by a square pyramidal number ".1
Interesting are protruding animal heads on top that are unique in the context of the pillories Portuguese. Almost all pillory Tower D. Flame consists of parts of the sixteenth century but those animal heads (Dogs, Pigs?) appear to be more provectas. Have been constructed based on berrão coming from the hill town of São Brás or may even be pieces from this? It is rather interesting question.
Pillories and Berrões
The pillories are located in the central square or wide of the villages and more than they intended to execute a punishment, with maintenance sentenced with variable time, were, and are considered as symbols:

-of municipal power in the middle ages;
-By collectively represent the personal guard of the interests and privileges of the population.
Also berrões, occupied in the Age of Metals symbolic attribute and occupied a central place, and still found the berrões are placed in a prominent position in Central Square amiudamente, sometimes pedestal like the totemic symbol of its people, serves as this example berrão Torre de Dona Chama or "bear" of Braganza and Murça.
Possessed of all the attributes of totem and taboo these places and their people, they do not like is that some unsuspecting tourist hill in back of the animal to do shooting for the photo album. Be warned the reader friend, you want to come here.
Bibliographical Note: IGESPAR (1)