The privileged men have always had the power to have a ror of people of farmland to serve them, always been so and will, notable example is how these 3 neveiros (snow wells) located in Santo António das Neves in Lousã Mountain. If the player is patient further understand the meaning so blessed sentence.
The Wells of Snow and the Office of neveiro
It's always pleasurable to roam the ridges of Lousã Mountain, with oddities to arise, here and there, although slightly unfortunate because the deer that are abundant here, fogem a 4 paws hardened traveler this by bringing home. Another example of strangeness are the natural neveiros the Coentral.
We know nothing of the age of neveiros and even their typology Arquitectonica little complaint, despite being older than the adjoining chapel of Santo António das Neves built by neveiro mor- (I do not know if such a profession existed and whose rarity even then would have to be necessarily inevitable).
The oldest news of neveiros is molded in a letter of 1757 with permit D. José signed by the Marquis of Pombal.
Of the seven wells constructed of only three remaining. Our eyes seek ingloriously traces of the other 4.
The wells in shale that still exist are round inside; however two are octagonal on the outside and the other is circular.
"Each well has a single door, close, facing rising, as to prevent, when the sun is strongest, can enter through the narrow door and melt the snow kept there.
Using ladders, made of rough wood, men descended to the bottom of the well - which then had more than a dozen meters deep - and as them were being dumped with snow baskets were treading this heavy bundles of wood wielded vigorously, the manner of pavers today.
Inveterate, isolated from the cliffs smoothed by stucco, straw and then covered fetuses, snow kept up these large reservoirs, until the summer - without a ray of sun you could get.
When he arrived the hot weather, the snow was cut into large blocks and followed to Lisboa. The transport was made, a first step, ronceiros in oxcarts. Only three or four of these large blocks could be loaded in these sturdy carts and were carefully wrapped in straw, in fetuses, even in burlap or, yet, stuffed into crates. 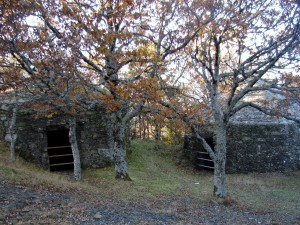 But, nevertheless, oral testimony says that much snow was lost by the path taken through the tortuous paths of the mountain, almost painfully.
In Miranda do Corvo, was the first molt the animals and then the cars left for Constance where, the land, went to the river to the Palace Square where they were made tasty ice cream for the King and his court, so tasty that Lisboans sought them at Martinho da Arcada and other cafes ". 1

As we sarcasm and text my friends Lousitanea-League Friends of Sierra slab, have quality here is his description.
"In the village lived the Coentral neveiros workers and that this activity was coordinated by Neveiro mor-. One of these men was Julian Castro (who built a chapel in honor of Santo António das Neves) and he who hired the workers was in the village - men, women and children. The men worked inside neveiros, women and children roamed the surrounding wells to collect the snow. When it snowed in Sto. António Snow, the inhabitants of Coentral, how could not envision the slope of neveiros, depended on the help of the inhabitants of Povorais (mountain village located in the Rocks Gois de Gois - in front of the Sto António da Neve) because they could see the snow and flocked to the chapel of St. Anthony Snow to ring the bell and so warn Coentrenses "2.
However, for enhancing production, the hoes iam ripping Alagoas they were, after all, a large artificial trays where the rain water was ponded and then come to turn into ice.

Where are they now Alagoas through slabs of slate and heather creeping?
What damage have not been foisted this unique set when, in 1971, there was built a lead aircraft to respond to forest fires?
Twisting the first paragraph means that the payment to the people who worked here in so singular craft should not be too, and powerful in the remote capital Lisbon, if refastelavam with this icy mirth, coming from wells neveiros. Also on existed Montejunto saw similar structures for the same purpose.
The magnificent panorama of neveiros of Lousã
Going up a little more we find the lonely lane Coentral (1102 m), designed to serve aviation firefighting and where it enjoys a sunken grand expanse of over 700 meters, on “gap Mondego "; unfortunately the visitor is limited, sometimes go once and have an ungrateful little misty sky with desirable clarity.
The description of the landscape of neveiros hardly exists here, but the reader does not become desolate, why is the description of High or Altar Trevim (***), the culminating point of the ridge of the slate will have the picture of that sight, because this is one of the major viewpoints central Portugal.
Photo Credits-Aerial photography is the great blog portugalfotografiaaerea.
1-Text taken from the website City Council Cessnock
2- Text taken from the website Lousitanea- League of Friends of Sierra slab.
Another note on the internet- Here is another interesting text about curious neveiros the Coentral