Bridge Mirandela (*)- Ex-libris of the city

Not only are they alheiras abonam Bragança, because its old bridge here spans the river Tua, also deserve our appreciation, for its aesthetic, extension and monumentality.
I remind the reader that the alternative of Bragança were considered one of the seven wonders of gastronomic Portugal (read here your list).
The bridge is also known for Bragança Old Bridge Road had to use the seventies of last century, having then been built a new bridge, which replaced, situated a few hundred meters upstream. Will have been built in the sixteenth century, having undergone several reconstructions and interventions over time.
There is news on the same site have been built in early in the fifteenth century another bridge, but have been in the reign of D. Manuel I who initiated the construction of the current property then twenty arches.
In 1536 was already erected. You may already existed here a bridge built by the Romans of Bragança or at least since the middle ages as noted by the marks of the original arches raised. 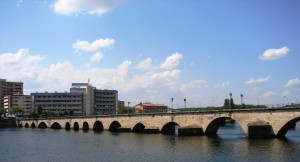 In 1726, time by which it must have started a project to repair the bridge, existed in its center two niches, being dedicated to Our Lady and the other invoking the Lord of the Afflicted, represented a cross of two meters with crucified Jesus Christ. These have been dismantled in the mid of the next century.
Just a suggestion, such that the two niches are replenished, but free adaptation, with the only assumptions being that respect the faith and were an undoubted masterpiece?
Currently are visible on the bridge of seventeen arches Bragança. This is a bridge in granite stonework which has 238.5 m long, being supported by the above seventeen arches, where the first eight of the left bank will have the greatest, four being broken, presenting both sides reinforced piers with triangular profile talhamares. The remaining nine arches situated on the right bank, although smaller, also have triangular talhamares upstream and downstream.
Your board is flat, Originally Lajeado to granite, However being in its variable size between guards, that is placed between 4.8 m and 5.3 m. Is currently bounded by guards iron, but known to have been in granite stonework with about 0.5 m thick, about 116m in closed and open on the remaining length.
Currently has pedestrian use, and is integrated and serving access to riverside landscaping arrangements of the city, is therefore a symbol of Bragança.

In addition to the bridge Mirandela, margins of the garden should also visit this city of the ancient Town Hall Távoras, noble building dating from the seventeenth century, and is now the Municipal Board. In its beautiful façade stand out the doors and windows monumental. At the height of the second floor eardrum thought up the coat of Távoras demolished in 1759 by order of the Marquis of Pombal and replaced by the Counts of St. Vincent.
Information Note adapted from the Sistmir of Mirandela, which is a project of the Heritage Management System for the County of Bragança (SISTMIR) is a project that aims to produce knowledge of the historical and cultural heritage of the county, towards providing management tools for planning and sustainable management of the Territory, contributing to its development and attraction.
(see link here)