Bridge Sequeiros (Sambucus) (*)-One of the most beautiful bridges in Portugal

How are imposing fortified bridges of Toledo (***), no rio Tejo, ou a Bridge Ucanha (***) over the river Varosa! Whoever comes to tourism streak of Beira Interior, desolate and wild, but beautiful, is required to know the gruesome fortified bridge Sequeiros, that unexpectedly accompanies those in grandeur.
The Structure of Bridge Sequeiros
Situated on the River Coa, based on granite outcrops, is one of the most important historic bridges in the country and is in good condition. Even today it is used by light traffic. It is supported by three arches in perfect lap, being the center flanked by two larger diameter pulley tides, board ramp with 51m long by 5m wide and masonry parapet. The floor is paved with cobblestone continuity.
The Tower Bridge Sequeiros
One feature that distinguishes it from others is to have a tower of square plan with go-arched and materialized a military defense device. The bridge with its tower, probably served Toll border between the national territory and the Kingdom of Castile and Leon, before signature by King Dom Dinis Treaty Alcanices. But this statement we are not sure. 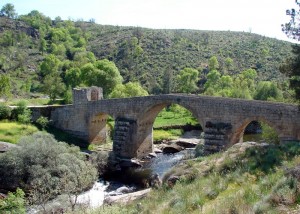 The bridge along with the Sequeiros Bridge Ucanha (***) is one of two existing bridges fortified in Country. Sure was (re) Built in the Middle Ages, but its roots may be Roman. We promise the reader a friend next trip trying to figure cushioned ashlars or traces of Forfex to be able to trace its origin to the Roman period.

The nature of things
Standing in the middle of the bridge the river flashes, revoluteando in tins of giant, the margins beset diverse riparian vegetation. There is silence, net current resonates in granite, to evoke terrifying memories, spectra that there have even poderão morrido drowned, in a desperate struggle with the waters, cried in vain that you acudissem – perhaps remnants of borders that man imposes on himself – wings Castela, there Portugal!
Another place for a strategic retreat from the world, this Vera dying – who saves? À Beira raiana, clear, because the bridge is to last more than a few millennia
Request help the reader
If the player was already here, what is your opinion, the bridge is of medieval origin (what we would take the purity Romance) or was originally a Roman design?
Location
Access on paved road. From the EN 324 come to Swanley-Coa and al the bridge is properly signposted, or at least three years was, but, who has mouth reaches the bridge!
Article dedicated to all the good people of Ribacôa
Boa Viagem!