Manueline portal of the Palace of the Dukes of Cadaval (Olivenza) (*)

Getting around Olivenza tornadoes are quite comfortable, because from the Palace of Arteaga (What is a magnificent tourist accommodation in the historical center) can walk in a few tens of meters and find all the local notables.
Let's start by Manueline door of the Palace of the Dukes of Cadaval which is a fine example of this style as Lusitanian.
The description is wrong because it has always been the Town Hall (Ayuntamento) and never belonged to the Dukes of cadaval, although they have been alcaides the Olivenza for a long period. 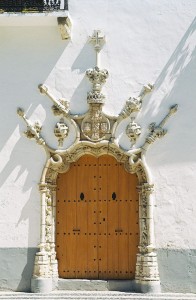 The Manueline portal is radiated from the early sixteenth century and is one of the identifying symbols Olivenza. It consists of columns with naturalistic vegetal elements and birds (the report has some characteristics of the Renaissance) quality; polilobado arc Muslim origin or at least stemmed the east whose symbolism seems to refer to the World or the Sky which is formed by different parties, namely lobes; armillary spheres as a symbol of the Portuguese overseas conquests; Cross of Christ (symbol of the Order of Christ); the central motif is the Portuguese coat of arms and shield Olivenza consisting of a tower and olive. The rear of this beautiful building leading directly to the medieval wall. And now dear reader to follow the most remarkable monument of Olivenza - a Church of St. Mary Magdalene (***) one of the most beautiful Manueline in PortugalSpain and ....