Town of Baldoeiro and Mirador de San Gregorio (*) (Mirandela)- Did you know ... Portugal is practiced the cult of Ophiusa?

1-The panorama of the valley Vilariça
2-By numerous archaeological remains ranging from the Bronze Age to the High Middle Ages do Baldoeiro
3-By magical-religious insculturas serpentine
4-The beautiful granite fraguedo that exists here with three towering crags to have cryptic names (Fraga of Cobra , Fraga Fraga Crow's Nest and the House of the Father)

After crossing the bridge and continuing in Philippine IP2 north, find a beautiful winding road climbs to the Plateau Adeganha, Where should stop around the corner because the landscape is filling the eye. After going to see the magnificent Romanesque church of Adeganha (**), takes up some time at the Mirador de San Gregorio and castro Baldoeiro, where the thriving notes Vale to Vilariça (**), choline isolated from the legendary Santa Cruz Vilariça, the mouth of the river Sabor savage, and the curve of the Douro surrounding Mount MEAO; and on the opposite side of the valley note the great tectonic uplift and block if there is a little closer at the repair site fragada where are the ruins of the old convent and the Trinitarian viewpoint of Santa Barbara. But the closer we got another fragada that contain both legends and mysteries magnificent, with boulders most prominent to have the name of the Father House, Crow's Nest and the Cobra.

But here on this hillside, this spur ahead, within towering granitic rocks, which is the mythical town of Baldoeiro. Here beauty is more important than the useful, because those stones whisper us amatórios secrets.
Desert mirage and go through that rough trail and you will see very attentive friend, sensitivity has not only knowing observer will see a lot of deformed rocks and not perceive the soul pantheistic site. 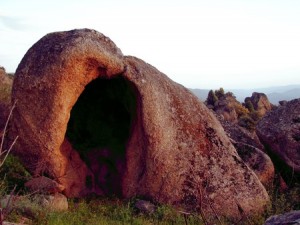 Town of Baldoeiro the Mirador of St. Gregory in the county of Estevais Mirandela

The Town of Baldoeiro shows traces of occupation from the Chalcolithic, do Bronze Final, the Iron Age Home, Roman and Middle Age. There are still faint traces of dwellings (two spun stone at most) and about defensive Iron Age, an enigmatic stone road, Lajeados, burial cave, remains of a church that likely took stones of a Roman temple, rocks with strange shapes, noticed that, chthonic gods vagina da fiel, where we can sit as animalejo, remains utilitarian ceramics incisive and smooth, tile fragments; Also in the town here Baldoeiro polished stone axes were discovered.

The Cult of Serpents in the populated Baldoeiro, Portugal the land of Ophiusa
More commotion in the town Baldoeiro derruídos to see the remains of the Romanesque church of São Mamede, where there was a medieval tower and beyond anthropomorphic graves. But where emotion reaches the extreme view is finally, that huge granite boulder, Known locally as the Crow and Fraga, also, by Fraga Boulder or the Cobrão large serpentine insculturas, related cults ofiliátrico, already discovered by Santos Júnior. Incidentally beautiful photograph with the boy is removed from the estate of Prof.. Santos Júnior deposited at the Historical Archives of the Municipal Library Mirandela. Are the set of six entries, which, the largest is three meters. At the top of the cliff are spiked artificial notches in the rock that may represent tubs libations to the pagan gods unknown and may be related to the ofiolátrico cult that was practiced at least the Bronze Age. 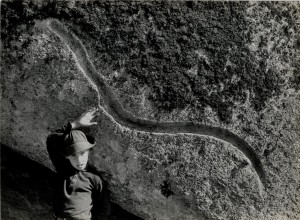 The Roman Aviena called the Portuguese territory as Ophiusa "Land of Serpents", people with a worshiper of snakes, perhaps this aim is the Bronze Age. According to this author the Estríminios, that habitavam or Ocidente Peninsular, have been driven by an "invasion of snakes" or a people's Saephes that as the name implies, would be worshipers of snakes (Greek Sepes). Does the imagination of Avieno working, will be legend or reality of our prehistory? Stranger is feeling the snakes as totem or divine manifestation, now so repulsive to our feeling. But more insculturados with serpentine rocks exist in Portugal, such as this fagot Painted in Vila King (you can read here) or rock carvings of stone in the municipality of Moura Sever do Vouga.

Would be here in the town of Baldoeiro Cividade of Banienenes? So we would be talking about an important Romanized castro, one of the people quoted in the magnificent Roman Bridge Alcantara (***). Certain is that baniense Opovo inhabit this region and Roman altar found almost proof.

Despite the meager traces Romans, in the village of Baldoeiro a beautiful altar dedicated to Jupiter and the Civitas Banienses found, dedicated by Sulpicus Basus Baniense of which is the National Museum of Archaeology (here you can see), the remains of the church of São Mamede, taking advantage of a Roman temple. Also here we found a Taurus Stone found by José Leite de Vasconcelos.

[slideshow gallery_id=”2″]
In the recesses of my mind confused ideas germinated in the spirit of solitude, waiver and scholarship. But the magic and beauty of the place to cover all traces of different people who passed through here in overlapping layers of mysteries.
When we leave here better understand the religion of the late Orlando Ribeiro. Then we say to the next, a whole crowd of ghosts stratigraphic, people who went and we are no longer. Still left with the avatar of the Moon emerging and which still floating in the zenith a remnant glow of twilight. Desaviemo us poetry and doing practical things you notice that the scrub is very site and is not ready to receive any untrained tourist standard for these things archaeological and without proper clothing, because a bad check Cobrão not appear to do so pernear!

A comment Town of Baldoeiro and Mirador de San Gregorio (*) (Mirandela)- Did you know ... Portugal is practiced the cult of Ophiusa?