Did you know that the ... Carvalhal beach is a great alternative to nearby beaches of Southend Sea and Almograve?
A Carvalhal beach naturalized is still very small, Cupped consisting of fine white sand, despite having read, in several articles that was wide and extensive, but ultimately all words or who do not really know the Carvalhal beach and just merely making a mere copy of what you read or you do not know the long sandy, but ultimately at the discretion of those who wrote such. Returning the brief description of Carvalhal beach, Beja in the parish Are Theotonius, not to be confused with another of the same name in the municipality of Sines, We can tell which lies a few miles to the south Beach Southend Sea (**), that is protected from the winds North and South, by cliff of schist and grauvaques carbon inclined to the South, but without the spectacular both tectonic structures that hold the attention to those who have eyes to this and this by a small dune ridge. The beach is probably its existence, as is usual in these magnificent beaches of the Alentejo coast to a small stream that flows into the sea. 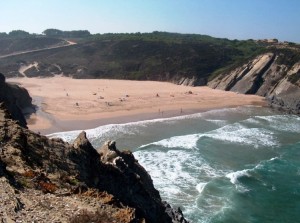 The beach has good structures, Bandeira Azul, is conceded and was classified as “Affordable Beach” for people with reduced mobility, by the National Institute for Rehabilitation.
The northern cliffs are two small beaches access very difficult, that at high tide are virtually no areal.

A Carvalhal beach the beach is ideal for nature lovers and gets combine all the factors that seek Numa beach: sun, water quality, Tranquil, almost untouched nature, beautiful people and good conditions for surfing and bodyboarding.
Written note in Carvalhal beach: Because I like both naturalized beaches? The causes are many, a more expressive than other, but perhaps the most compelling is its open space notion of freedom makes me feel (sand, sea, sky, wind, rocks, nature and other people who lie or rejoice and almost as Lord guided the Earth, ámen).
Day of the sea in the air
"Day of my room mar - Cube
Where my gestures Sleepwalkers deslizam
Between the animal and the flower as jellyfish.
Day of the sea in the air, give up
Where my gestures are seagulls that are lost
Rolling on the waves, on the clouds ".
SOPHIA DE MELLO BREYNE ANDRESEN
Image credit the first picture is the Mário Rothes.
GPS: N 37 º 30′ 2,72” ,W 8 º 47′ 34,92”