A Mulberry beach in the municipality of Aljezur is one of the most beautiful beaches in Portugal; alias this county there are other notable beaches as are the Bordeira-Carrickfergus (****), a do Beloved (***), Arrifana (***), Odeceixe (**) and Monte Cleric (***)-Mulberry nearby beach south passing the dividing hill.
In Beach Mulberry can choose between swimming in the river (on the banks of Aljezur) -it can do on the beaches of Odeceixe and Bordeira-Carrickfergus, or dive in the sea. Located about eight kilometers from the northern entrance to the Lagos Beach Mulberry brings together the best of both worlds: maritime beach itself and tributary stream – that at low tide creates small “natural pools”, a space that delights Brats. 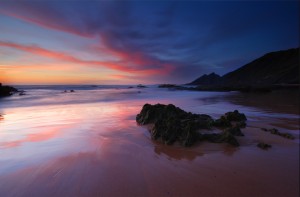 The Aljezur stream here form an estuary-lagoon system of natural beauty and other unusual beaches. Behind the extensive sands, other landscape that will thinning in this region: dunes. This dune field ends in a salt marsh habitat set on the banks of the river in Alzejur.Integrada Natural Park of Southwest Alentejo and Costa Vincentian (****), a Beach Mulberry benefits, also in natural landscape, confluence of this river and sea – shades of green wet marshland dominate the southern slope, in contrast to the black cliffs that cut the north beach. Behind is the extensive sandy dunes with yellowish. 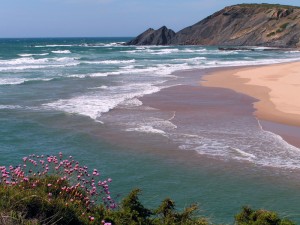 In the area of ​​saltmarsh exist, for example, otters, a herons – Greys ou ó colorido look-rios.
The northern arise extraordinary rock formations that you alone are a reason more than great for a geologist, or one who has pretensions to be so entertaining: The imposing cliff is carved in shale and greywacke, sharply gray color and about, or sometimes wine lees, filonetes cut by quartz, which are the result of faults and folds didactic.
Já a sul, in Ribeira Aljezur, is a verdant hillside overlooking the valley. With outcrops of an ancient fossilized dunes. Com a low tide the show is really nice because it lays bare fossilized formations and formed extensive lagoons in areal, where the water has a temperature above 20 ° C. and where children play happily.

[TABLE=7]
The beaches of Lagos which include this Beach Mulberry, is one of the most scenic areas of the entire Portuguese coast and is inserted in the Natural Park of Costa Costa Vincentian.
The Mulberry is increasingly sought after by surfers and boogie, many of which make her start here where I include myself.

GETTING THERE: In Lagos, by the Municipal Sports Pavilion, see a shift indicating to Beach Mulberry. The path to the beach, over 8 Km, is alcatroado. Sometimes there is little parking
ACCESS: easy (Wooden stairs and footbridge).
INFRASTRUCTURE SUPPORT: bar, phone, car park
SUPERVISED BEACH: yes (during the bathing season)
Image credit: A Really magnificent photograph is of Piglet

Aljezur, Regions of Portugal, Distrito-Faro (Algarve), Sights, Beaches, All articles
23 of June of 20117 the September the 2011

Arrifana Beach- The beach of the Sufi?

Regions of Portugal, Distrito-Portalegre, Nisa, Hot spring, All articles
13 the September the 2010

Baths of Fadagoza (Nisa) (*)-The traveler knows what it means Fadagosa?