Beach Bordeira and Pontal Carrapateira (Aljezur) (****)-Is this the most beautiful beach in Portugal?

-The beach Bordeira Carrickfergus is one of the most beautiful in Portugal.

-Your spit the South was a candidate for one of the seven wonders of Portugal in the category beaches and cliffs.

-Wide beach, with maritime and fluvial part of.

The beach Bordeira-Carrapateira, located in the Natural Park of Southwest Alentejo and Costa Vincentian, in the municipality of Aljezur, is one of Europe's most beautiful beach and is separated from the Beloved (**) the spit of Carrickfergus. This is a coastal strip of high limestone cliffs intensively cropped fields lapiaz, small caves, leixões and was a candidate for the 7 Natural Wonders of Portugal.
Despite being the nearest town Carrickfergus, beach Bordeira took its name from the stream that flows on top of the southern beach that abuts the limestone cliffs; Bordeira is a typical small village near the beach.
The sandy beach is long and wide Bordeira, the sand is fine, the waves are ideal for those who enjoy mild turbulence and surf.


The amazing geology of Praia da Bordeira
On the beach of Bordeira, may not be headlining the sea, although this is always remarkable, but its geology.
We from north to south, schists and grauvaques carbónicos (more or less 300 millions of years) deeply bent and broken by an admirable Mesozoic volcanic breccia. These shales are overlaid in angular unconformity by reddish Sandstone detrital sedimentary rocks formed at the beginning of Silves separating the American and European continents in the Triassic period (225-200 millions of years), above this is still a yellowish consolidated sand dune with Quaternary 1,8 watergrass years. Here can be done a wonderful lesson on the history of the Earth. After then we have limited the Edenic setting for a beach dune field to remember the North African desert. The South Beach Bordeira is interrupted by the aforementioned stream that flows in this wonderful sea and the limestone cliffs flatter an unforgettable scenery. These exist a small car park where you can access the beach after wetting their feet or even joelhinho. You can also park in the town of Carrickfergus and follow the section of the river to the beach.
The beach is popular with surfers Bordeira coming from the four corners of the world and people of good pleasures that demand for a relaxing holiday in the most beautiful beaches in Europe and where we can heal the pain of unnecessary suffering.

The Depth of Carrickfergus
The Depth of Carrickfergus corresponds to a coastline with limestone cliffs and horizontal fossiliferous marls of the Middle Jurassic and Upper deeply indented bays that define abysmal steeply, in the sea of ​​transparent and greenish rocks clash with force in rock.
The top of the cliffs corresponds to a surface of marine abrasion and is partially covered by a gravel beach level and current Quaternary dunes.
In spit of Carrickfergus can also see the remains of a Muslim fishing village probably seasonal.
In the wee door Pontal the Carrapateira, older fishermen tend to distract the gullible tourists with the legend of the dragons. They say that, on certain days of the year, emerge from the waters sea monsters able to squirt water up to the sky.
The legend is not insignificant. Have been infused by the routes of cetacean here for some generations passed and the cliffs that surround most of the beaches, full of fossils, referring to the Navy spent the Algarve village.

“The rocks nearby is the famous flagged realize Vila do Bispo and is also here that lie some of the most rich fishing grounds in the region. Secret Places, accessible only by ropes and rough wooden stairs, that local fishermen have with an almost religious zeal”.1

Magnífica landscape with high biodiversity
The Depth of Carrickfergus has priority habitats for nature conservation at European level, highlighting the fixed dunes with herbaceous vegetation ("Cinzentas dunes"), formations and Cistus palhinhae in maritime heath, species of flora with threatening and vulnerable status of Iberian endemism.
Being over zone for soaring birds and migratory passerines, there is every year the displacement of thousands of birds crossing the sky, migrating between wintering areas in Africa and nesting in Europe. These are, among many others, the robin-breasted blue- , can also be found seabirds and shorebirds, on transit migration as Alcatraz or birds of prey like the eagle-sidewalk. The cliffs and sea cliffs also provide nesting area for several species of birds, as the osprey, the peregrine falcon, and the common kestrel kestrel, kestrel.
One of the most common species of sea cliffs on this coast is the White Stork. Usually nest in trees, old buildings, or electricity poles but - in the unique situation in the world - it is here that we find their nests in an apparently unstable balance, mas and insurance firm, on the sea or on rocky cliffs along the coast – the palheirões. 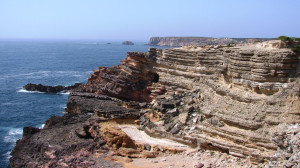 Note to the beach Bordeira:
Disparate are the feelings we had here: the first time distracted by geology, the second tied the loneliness and third in total bliss that only covers when you're happy, we objectively know what this means.
In this second visit was the third poem is another Numa photo album photo.
Loneliness
You are all you m, sea, and, however,
as you are sem, that solitary,
that distant, always, yourself!
After a thousand wounds, every moment,
which my brow,
Tuas Ondas, as my thoughts,
come and go, come and go,
kissing, moving away,
an eternal knowing yourself,
sea, and is unaware.
And thou knowest not,
pulsates your heart out and not feel…
That fullness of Solidão, lonely sea!
Juan Ramón Jiménez, in “Journal of a Poet I reciencasado”

A comment Beach Bordeira and Pontal Carrapateira (Aljezur) (****)-Is this the most beautiful beach in Portugal?