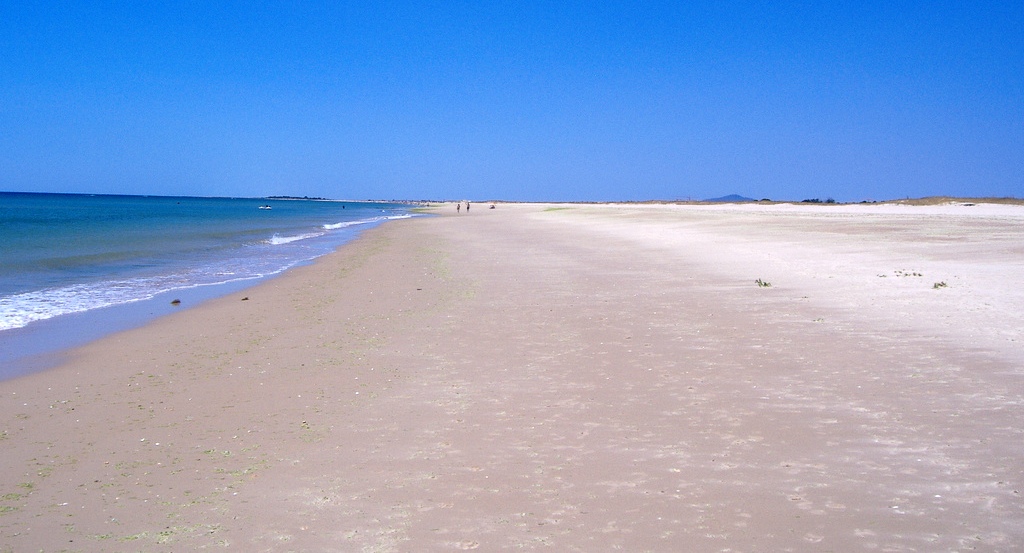 A Island Cabanas (beach), in Tavira is an Edenic areal. The crossing to the island is provided by small boats to fishermen who run the city.
A Island Cabanas with only seventy feet wide and seven miles long (variam these numbers every year) is the smallest of the islands Ria Formosa Natural Park (***), and is a great choice for those, as we, enjoy uncrowded beaches.
On the island of Cabanas whenever we feel like going out this wonderful stretch of sand, of fine sediments, clean, which we alternate with dips in calm waters, warm and transparent; as we move 10/15 minutes, fleeing the largest gathering of people, remained alone, in paradise - the bar is to the west of the Island of Tavira, the site of the Four Waters and east are in the bar Insua Cels the Old (***).
Along the lagoon develops a dense riparian vegetation with sugarcane fields and cancelation. The dominant habitat is marshland and even the aroma of maresia is purified and vasa. Are observed in vasa some waders, Peering sludge with their beaks in search of food. Forgive me my ignorance reader to specify feathered critters, distinguish ducks and chickens is no longer anything bad. 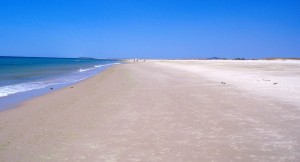 Cabanas de Tavira, was an old fishing village of tuna (in 1747 are the first assignments as the Beach Huts Frame of tunas or huts Bar, which is currently mainly facing tourism, but still keeping some character. In its estrema is your only monument, the Fort of São João da Barra.

MarginalHacks, parallel to the Ria Formosa, and its various terraces enjoying themselves at anchor boats guarding the traps for octopus fishing nets and trammel nets of artisanal fishing, Old fishing gear already known in the seventeenth century. Many of these vessels have already abandoned, offer a strange landscape at low tide. At the end of the day the visitor, you can taste, Restaurants in the marginal, oysters and clams collected in the ponds near, various acepipes dust and other delicacies of the Genre.
Forte da Conceição (or St. John the Baptist or St. John of Barra)
We confess, with sorrow our, who have not yet visited the interior of the fort, which is now transformed into a modern, ecological hotel. Dominant position on the beach of the Island of Cabanas and the estuary arm, the fort was built in the seventeenth century, in the reign of Dom João IV, in the context of coastal defense in the War of Restoration. Takes the form of four-pointed star, with a bastion at each corner. The door facing the Village, is preceded by gap.
Near the Island Cabanas and for those who enjoy historical heritage can visit in Conceição de Tavira Church of Nossa Senhora da Conceição, with its beautiful Gothic-Manueline portal. 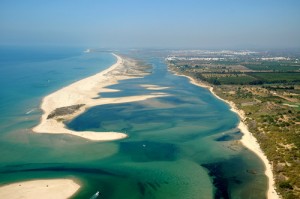 Utilities Ilha de Cabanas (beach): Has blue flag, surveillance, deck chairs and sunshades to rent. Parking ordered, but August is almost impossible to park the car.
A Poem for you:
We have said elsewhere that the beach huts of Tavira is a paradise and there are still places like this in the Algarve. Flawlessly us with the poem Freedom of Sophia de Mello Breyner (1), that is all, what we feel when we are here.

Freedom
Here on this beach where
There is no trace of impurity,
Here where there is only
Waves tumbling continuously,
Pure space and lucid unity,
Here time passionate
Find their own freedom.