In unpopulated region and destroyed by forest fires remains a gorgeous quartzite landscape near the village of Milreu, cascades with a 'painted fagot "and the river beach of Boulder Bored which is a candidate for one of the Seven Wonders of Portugal-Beaches (Here more information about the competition).
Gazebo in the river beach of Boulder Bored, Opened in 1964, You can admire the landscape of hills and mountains covered with ancient pines almost all burned, but the greatest fascination that binds us is the geological and legendary universe that lies at our feet in steep valley; a little further down there is a quartzite outcrop with a slit, which gives its name to the river beach of Boulder Bored. The origin of the tunnel is artificial ignore whose origin. If the reader is of the region and know the reason for this passage could help us complete our text?
The rocks are quartzites ordovícios (formed between 450-550 millions of years) with thin interbedded shales that exhibit trace fossils here as the illustrious "painted fagot". With such rock types and water lapping is easy to understand that treasures await in the form of waterfalls.
On the right side of the gazebo, there is a niche with the image of Our Lady of the Way, after which there is a path that allows you to move to the lower part of the ridge and down to the river beach of Boulder Bored, passing by waterfalls and the “Bicha Pintada”. 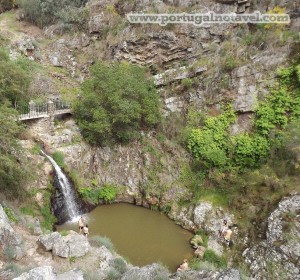 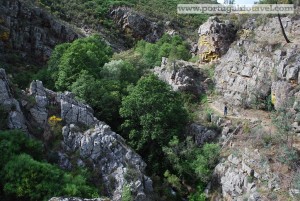 Over the millennia of man's existence, and even before the geology has unraveled the mystery of "Bicha Pintada" in Vila King, espertado much interest should have the strangest ways of rocky outcrops and started giving will give up the most fantastic explanations in the field of transcendent and many of these have become the target of litolatria over the centuries first in pagan cults and then adapted by religion Christian. This happened for example with the Bell Stone Celorico Beira or the Valentine Rock in St. Peter Curval, but also with our Bicha Pintada, an equity as well they should be classified as a natural monument or a Public Interest.
There is little doubt that the serpentine shape of “our Bicha” should have been used in totemic worship of the rituals ofiolátricos (Snakes) described by cujo Expoente Avieno and discover maximum is not 's Populated Baldoeiro in Mirandela (Here unnatural but grooved in Granite Man).
The Bicha Pintada may have been a rock sanctuary dated BC, ie Iron Age, when our territory was designated as the Land of Ofiúsa by Avieno, this statement may be more fantasy than reality that can be proved or disproved by a simple archaeological campaign. This is the largest geosítio serpentine structure litolatria (natural or constructed) the Iberian peninsula and perhaps of Europe's second assertion Carlos Neto de Carvalho (1).
But the legends themselves are also able to give us some information and behold here a legendary "Moorish" of great beauty that combing with a comb of gold that hints at his treasure and establishing an ambiguous relationship with a simple surge in pastor (a) that follows a pattern that is common to other regions of Portugal. Our nightshade is a female genius who resides here and save a treasure and you want your freedom or break your spell. Asks the young man to return the next day, but without telling anyone, to "disenchant", giving him a kiss on the roof of your mouth getting something valuable in return. Back to the site the next day, rather the radiant woman finds a snake that you want to kiss. Frightened refusal to kiss the serpent, poor boy who loses here two very valuable realities in life!
The Moorish fantastic with gold combs are eternally linked to the different manifestations of water, as they also meandering rivers, springs and wells with magic-religious connotation. The Moorish almost always arise as guardians of local crossing into the land, the "limit" sites, where they believed that the supernatural could manifest. Behold therefore the likely presumed pagan temple by the legend.
Here we have the seductive golden comb with Moorish, the river water, registration in the serpentine rock, the humble passerby, and treasure in this case a calf of gold, according to a panel of tiles on the viewpoint of the river beach of Boulder Bored.
Well, the reader can questionar where you can be rich; coincidence or may not inform you that the creek Codes had an intense exploitation of alluvial gold in the open as noted by "conheiras" located along its banks and should defended with attachment due to its archaeological importance (Here you can read a good article on Conheiras of Vila de Rei)
For the, much could be said about the enchanted Moorish and want to add a question can burn the Christian reader; will not be appearing in the Cova da Iria in 1917, an adaptation of a legend of Moorish, everything leads us to believe that yes, that our Lady of Fatima can be a disfigured derivation, mas that seems obvious, belief in the constancy of enchanted Moorish. 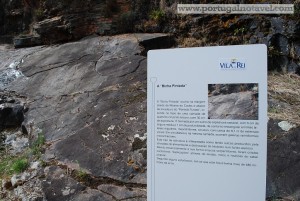 The taste for the truth sends word that concrete just know that Bicha Pintada is a icnofóssil done in a sandy seabed in the Ordovician period, not by a Snake, but by a trilobite that left behind a groove that is a mark of power, as noted by the continued registration on benchtop, by underground galleries and the wormlike bilobites deambulávamos when we observe between the cascades of river beach of Boulder Bored.
To whet your curiosity mentioned that there are several brands of trilobites (cruzianas) with lots of legends associated with Fags Painted eg in Penha Garcia (*) and Serra da Arada with Shrine dedicated to St. Macarius (***) -and this poor penitent saint even had to kill a large snake that plagued the region.
Finally the Niagara River Beach Penedo Bored
At this point the patient reader may be waiting for some description of the Cascades, going to this. When the river begins to widen due to the influence of the dam of Castelo de Bode and near the end of intensely folded quartz ridge here, flanking it and returning to entranharmos within the quartzite, find a first cascade adapted for bathing, but the most beautiful is hidden in a recess where a water line form a beautiful waterfall, that despite the small (between 12 a 15 meters, nem was bem) is wrapped in a beautiful riparian environment. This area of ​​the Cascades is also known as Bufareiras.
Anyway inform that the river beach and the cliff Leaky your entire environment is a place that will record in its memory, when viewing. 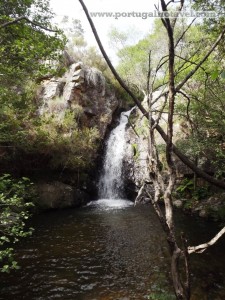 Additional References:
Neto de Carvalho, C. (2009)- CRUZIANA D’ORBIGNY, 1842 IN PORTUGAL: INTERPRETATION PALEOBIOLÓGICA Consecration as PRODUCT geotouristic.
Carlos Neto de Carvalho has done an outstanding job relating to paleontology with pagan religious cults. Just search Google his name and read some of their work. Also here about brands of trilobites in Penha Garcia. You can read his work here another.
Fairies in the Woods blog can read an adaptation of Moira's Enchanted Bicha Pintada.