Recovery of the body of the Monastery of Lorvão (*) Penacova: this will be?

Here is a good news for the county of Portugal and the central region of Portugal the news agenda is taken directly from the Borders sometime in June 2010.

"It is the last start of work on Monastery Lorvão. Besides the organ recovery, intervention includes the rehabilitation of the cloister and the construction of a museum.
The first phase of the redevelopment Monastery Lorvão start "in coming days", with archaeological excavations and cataloging of single body parts of the Iberian Peninsula, ontem announced the regional director of the Culture Center.
As EVERYDAY THE BORDERS had announced, contracts for the archaeological inventory of parts and the pipe organ, whose recovery process has dragged on for more than two decades, were signed yesterday in Lorvão, is expected for 2012 completion of this phase of the intervention, funded by NSRF and that amounts to more than three million euros. 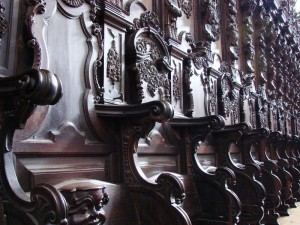 The works should start "within days", disse à Lusa António Pedro Pita, recognizing that intervention Monastery of Lorvão is awaited by the population "there are too many years".
Ontem à tarde, as seen in photo, ultimavam workers already assembling the scaffolding, to starting work.
"Today is a historic day for Penacova and Lorvão, because it initiated a recovery process that is an aspiration of generations ", Lusa said the mayor of Penacova.
"The magnificence of Monastery Lorvão watches a fair step, although late, What is the recovery of your body. The people of this county have deserved it and gives me a special pleasure to see that our heritage begins today to be considered ", Humberto Oliveira added, a statement sent to media.
The comprehensive redevelopment of the Monastery of Lorvão is in charge of architect João Mendes Ribeiro.

A comment Recovery of the body of the Monastery of Lorvão (*) Penacova: this will be?