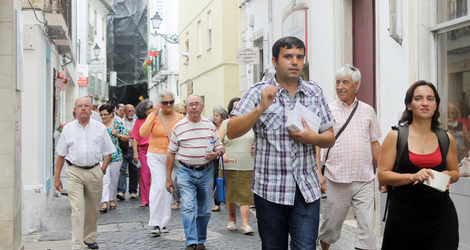 If one fine day the dear reader solve follow the directions of this site and decide who is traveling to some sites that we indicate will be great. Personally we were happy if the Portuguese know the remarkable places in Portugal and fall in love with these. Unfortunately this was not the year we invested more in Portugal Remarkable site. Lacked time to travel, writing and the network of partnerships was less than expected, however I have pride in the work. Here are some numbers and motivated to find the size that the Noted Portugal took 2014 and the objectives we have set for 2015.

What happened 2014 (the order is relatively hierarchical).

1-Were present and organized numerous tours with great groups, all over the Country

2- Visits and tours the country:

We visited many remarkable places in our country from north to south of Portugal, making thousands of thousands of kilometers in 2014.

3-Number of visitors to Portugal Remarkable:

We had an increase in traffic 8,2%, however, being short of 2012 where we had our best year visits. The main sources of traffic were by direct connection and the search engines Google (this mainly), Bing, Yahoo, Ask e Sapo.

-It was obvious lack of time, since every day I had to move me from Coimbra, Marinha Grande and Gois and also by cibervadiagem

A major improvement was the creation of a new layout. We decided it was important to also change the colors that we used previously, to something more simple and less aggressive, having chosen a color palette much more neutral and more readable.

Also readability seems to me better and faster.

The year 2014, despite the crisis, was a reasonable year for us, and although we have not achieved all the goals we set ourselves, we were close to some of them and Remarkable Portugal argues that tourism and Remarkable Heritage continues to increase. It was a year that prized the sustainability of this website we created in 2009, and today is a milestone in Portuguese blogosphere. However, for 2015 wish the stakes rise considerably, produce more and better, and above all continue to grow. Here are our goals for next year:

2- Increase the flow of visitors to our site.

5-Start with social networks Tweeter and Google Plus.

8-Improve my work digital marketing, with emphasis on email marketing

We would like to wish all readers, people, employees and colleagues a year of 2015 full, travel and many remarkable adventures! It, of course ... with a lot of health, affections, financial breathing space, time and tranquility!

56 Wonders of the District of Aveiro (Units Heritage Notável)