Evora has many secrets, Finally is the most beautiful city in Portugal and the most well-preserved and each time it disturbs a dwelling or any cavadela that do may be more reason to find a furtive treasure in the mists of time. As we spend a few months, and perhaps years, unravel such secrets in the city of Évora, classified as World Heritage Site, show you a secret right now that deserves our esteem- the Restaurant Almedina.
When we remodeled an old warehouse, his friend Armando Own Restaurant Almedina, found important remains such as the entrance hall a beautiful dome of the fifteenth / sixteenth century with the key to closing the flagship Cross of Christ. This space could have been part of the old space that was the former gathering of Santa Marta to protect women from poor life (no family, homeless- after touching a worthy site to deserve note just so your view), next to the Chapel of Santa Marta and which he named the street where the Restaurant Almedina. 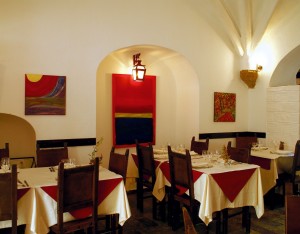 The Gathering was created in Santa Marta 1490, in ancient manor of Estaços, integrated in the Dominican Order, having given rise to the convent of St. Catherine of Siena, that the counts of Vimioso sponsored in 1547. Completely disappeared in 1900, with its interesting church and cloister of the Renaissance, but some traces can be found in Restaurant Almedina.
This relic was born then Restaurant Almedina Evora and the Alentejo gastronomy as we speak we say at the outset that this is a choice location for tasting.
Ements Restaurant Almedina
The phrase of Aristotle "We are what we repeatedly do. Excellence, then, is not a way of acting, but a habit ", rests entirely on the quality of serving and well-doing of Armando and Joana work so well when your menu, for many years, the restaurant Almedina.
The menu is diverse and here you can find great dishes like: Hare with Beans and Turnips, Fried rabbit with mashed potatoes, Carne Porco à Alentejo, Creamed asparagus w / beef bowl, Roasted lamb stew lamb, Lamb chops stewed, Miminhos Veal / Pork Tenderloin w / Apple Puree mushrooms and cream sauce, some of these dishes will have to be ordered in advance.
Or the tomato soup Alentejo, Alentejo Açorda, Shark soup, Gazpacho with fried fish, Tion where no shortage of coriander as dessert with the Sericaias famous Elvas plums or Encharcada.
But also great are encómios to friends Armando and Joan who is so warm and kind manner received us.
The restaurant is strongly recommended Almedina by Portugal Remarkable all our readers.
Useful information:
The Restaurant Almedina is located in Trv St ª Marta , 5
Search for 500 Giraldo Square meters.
Open the 12 H às 15 H e das 19 H ás 23 H
It locks up for weekly rest
By Sunday night and 2nd Mobile Fair all day.: 969405415 or 967462010
Email: Almedina-Restaurante@hotmail.com
Site : www.almedinarestaurante.com