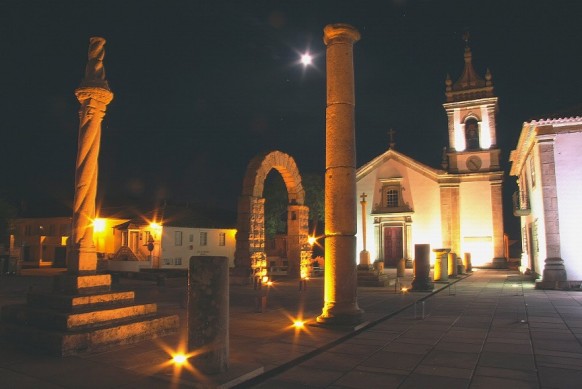 In addition to Conimbriga (***), the district of Coimbra has three Roman monuments: the cryptoporticus in Coimbra, a Roman villa of Rabaçal (*) in Penela county and this "Splendissimae Civitati" which is located in the current village Bobadela Oliveira on the outskirts of the Hospital, who was county seat between the first and fourth centuries. d.C.

The Roman Ruins of Bobadela are one of the most important and well preserved architectural sets of historical and archaeological value of the "Roman period" in Portugal deserved hem 1936 many years the National Monument rating. Among the diverse collection that is exposed outdoors, right in the urban fabric of the village bucolic, stand-: the structural remains of the main square of the once Roman city, of the forum; the majestic arc; Britney splendid city as epigraf, Julia Modesta and Neptune; the enigmatic head of a Roman emperor; and the magnificent amphitheater.

The foundation of “The city” of Bobadela, probably dates from the period of Augustus Caesar, but doubts are still many. The name of this important Roman city Bobabela is unknown for the simple reason of not having been discovered any headstone to clarify this doubt.

The redevelopment with the forum and amphitheater renovation has made the capital city rise from the ashes. Throughout the village is the Roman estate miscellaneous, as bases of columns. It was further discovered a monumental marble head, stone coming of Estremoz region of an Emperor, still unknown.
Ruins of the Roman Forum Bobadela
The Forum of a The city was a large square surrounded by porches and buildings that often was near the place of confluence of the two main roads, designated cardus and decumanus.
The forum of the imperial era Bobadela, here was a monumental set, isolated by a wall from the rest of the city-a forum-block. 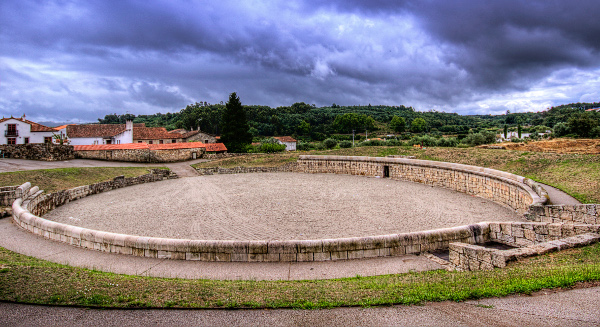 The Roman arch of Bobadela is the most conserved part of the forum and the wall would be your input source. It's spectacular, granite blocks with its cushioned ashlars, inside and outside, laid without mortar and topped in its approximately 4 meters by coping well equipped. The stones have a pair of holes, previously carved on opposite sides, which was priced “forfex (metal hook used for raising the heavy blocks, at the time of construction of the monument). The ends of this robust "pliers" coincided with the two small holes. The pressure exerted on the Forfex holes allow the granite blocks were, that way, put in place”1 . 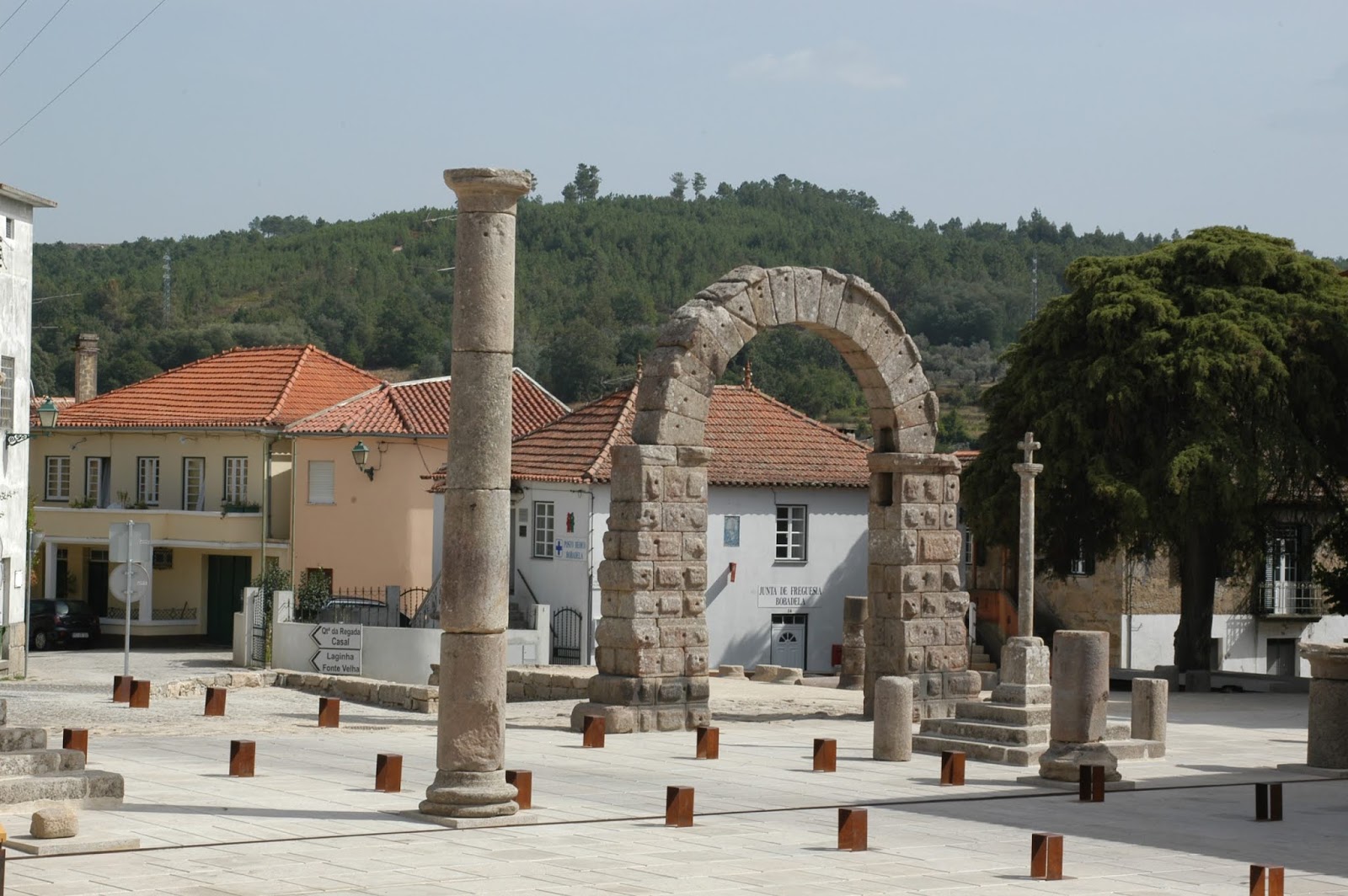 
Forum, right in front of the parish church is still murarias boxes, columns, cobbled sections and this elegant and pillory with stem Solomonic termination dated 1513 when it was given charter manufactory. All these columns raised high have an almost religious scenography. But is the monumental arch which soon attracts our gaze.
But Bobadela is not only Roman remains, worth wandering in town to see it and also repair the prestigious villas called the historic center, such manor Square Matrix.
Roman amphitheater of Bobadela
During nearly two thousand years, Roman amphitheater in Bobadela been buried. Only 1980 It was discovered and refurbished.
The entire assembly must have been built in the last quarter of the first century AD, have been destroyed by a fire in the fourth century, taking into account the findings ash soil arena.
The elliptical arena 40X50m, North-south orientation, with a thick gravel floor is bounded by a wall 3 meters. The crowd would be in wood.

The podium of the wall surrounding the arena was marked by two entries in its major axis and formed with rows of blocks of granite and topped by a two-piece mantel.

The amphitheater of Bobadela, was not staged fights beasts, because it did not have underground galleries for agistment; perhaps it would be made gladiatorial. This single set in Portugal probably only served for several games, song, dances, recitals, and, possibly, concerts with the musical instruments of the time and nature of religious ceremonies dedicated to the emperors.

“In the old church Bobadela, demolished in the late 1740 and replaced by a new temple in the baroque style, I thought up an inscription whose text is currently recorded on the main door of the church of Bobadela. A caption, moreover truncated and incomplete, It was perhaps destroyed or used as the new church building material. The translation of the patent text in this message carved in stone, can be inferred that Julia Modesta (a possible priestess of high religious status), the wife of quality of flamen (priest) Lusitania, C. Opinions cantius, redid the forum doors at its expense. this section, which is in the records of também a most splendid city of, It proves that there was in the plains of lowland Bobadelense one civitas capital he shared with Viseum the vast plateau of the central Beira Beira or d'aquém da Serra, the Serra da Estrela, Montemuro and Caramulo delimited. However, you can not even know the Roman name of the city, the simple reason, it was not discovered any tombstone to clarify such questions.”

This inscription hewn in monumental letters is embedded in the base of the bell tower of the church matrix Bobadela. As for his translation, this may be related to any temple dedicated to the worship of Neptune, Roman God of the Sea or belong to a monument on the water (nymphaeum Neptunale).

Among the many artifacts found, one of the most notable is the monumental head of a Roman emperor, located in 1884 a courtyard, in the vicinity forum. Although it is uncertain to its original location and the finding context, the dimensions of the head carved in white marble, it may belong to a statue of approximately 3 meters. The picture degradation makes it extremely difficult to identify. Tiberius (14 d.C. – 37 d.C.) or Domitian (81 d.C. – 96 d.C.) are two of the hypotheses.

As Roman ruins of Bobadela, They are an important Roman treasure, unique in the country - and is unquestionably one of the main tourist assets of Oliveira do Hospital. In the center of interpretation of the ancient ruins Roman city Bobadela can see some archaeological, such as, visigótico one liturgical vessel proves the continuity of the metropolis in the Middle Ages. Have a nice trip!

Additional Notes: (1) Information collected from the site of the town hall of Oliveira do Hospital