After you have described here the magnificent Roman ruins of Milreu (***) (Trail) month at a time, of the Algarve also put an article on Roman villa of the Fifth Abicada which is overlooking the Ria de Alvor, where you can enjoy a beautiful Algarve countryside with the backdrop of the Ria de Alvor, here only in principle.
Century III d. C., a wealthy Roman landowner built Roman villa Abicada Easy prosperity, based on the exploitation of the vast resources that nature offered him – seafood products in conjunction with products of the land platted a decisive complementarity with future. Wine, olive oil, salt and fish, future elements of the economy and local cuisine.

[TABLE=8]
Of “villa” Rome Abicada know yourself apart corresponding to male and female quarters and kitchen and storage rooms. Its plan is unique, developing around a hexagonal atrium. It is presented in the form of a rectangle divided into three well differentiated.
The spring is distinguished's body building for barns, kitchen and slave dependencies.
It is the mosaic that lies the greatest wealth of Abicada, although the reasons are purely geometric stylized floral with a few figurations. Peltas with scrolls or interception, zone lines, concentric circles, shields triangles axadrezados, estrelas of losangos, We Solomon, white tesserae running parallel to the walls, gray tesserae diagonal symmetry, oil blue flowers on white background. Panoply of limestone colors highlighting the contours and swelling forms. The walls are made of stones connected by mortar of lime and sand. Run along the ditches, coated “opus signinum”, conducting fresh water. 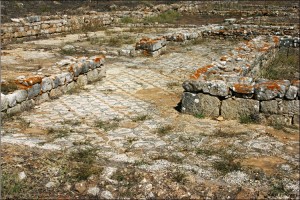 Unknown whether the actual limits of “villa”, many stones await systematic search, other disperse or huddle no apparent connection around the house. Stones that together formed walls with so many stories to tell. These stories can not make history, just dream and travel in time references too accompanied materials for the perception of feeling and thinking of those who, somehow, We are fragments of the cultural heritage bequeathed to us.
A Roman station Quinta da Abicada, with its colored mosaics, geometric motifs that constitute one of the hot spots to visit Algarve however it is necessary to undertake urgent measures that precious Roman villa, before they miss and pass only appear in the history books of Portugal and the Romanization of the Peninsula. Admittedly, with the surrounding area and the complex livestock existing logo near the site is difficult to create an attractive space for the visit of the "general public", but the abandonment and neglect are not the solution.
This is a remarkable Roman villa in Portugal, and that urgently needs to be preserved.
Text only slightly adapted from http://terrasdeportugal.wikidot.com/abicada
Another notable article on Abicada

Old Village Azevo (Pinhel) – Have you ever noticed this hill José Saramago?