We made a recent visit to the Roman ruins at Pisões Fernanda Carmo company, Bejense the seven broadsides and technical Tourism Bejense, a great friendliness and professionalism. To visit the Roman ruins of Pisões, you must first call the tourist office to schedule a visit, because the set is properly closed to prevent their vandalism.
The Roman ruins of Pisões, located in the parish of Santiago Maior, in Beja, were discovered in the late 1960, when they were in the land agricultural work, and then we started immediately to its archaeological research.
It is one of the most monumental villas Roman Portugal, founded in the first century and abandoned in the fourth century. Was the subject of archaeological excavations carried out between 1967 and 1981, that, in addition to having various structures disclosed, allowed to collect a vast collection formed by current use of ceramics, type ceramic sigilatta, mosaics, friezes, glasses, bronzes, coins, Murals, among other artifacts. Work focused in the urban area, missing still dig the rustic part. In the excavations were also recovered some elements that point to a continuity to the occupation of the Iberian Peninsula by the Muslims.

It is possible to observe the owner's wealth and the taste of the time want to line the floors, with mosaics and marble, either on the walls, with mural, which still retain some traces.
A villa covers an area of ​​approximately 30 thousand square meters, being situated in a zone extending flattened by a gentle slope down to the river chimney.
O model arquitetónico está centrado peristilo, with a central decorative pool (impluvium) and a colonnade surrounding, around which are distributed about forty rooms in the house.
The main façade of the house opened onto a large outdoor pool, beyond which lie family tombs, being, until now, excavated three.
The mosaics, have beautiful geometric compositions and naturalists, with emphasis on the representation of birds (doves) and marine animals (an eel and bulging fish), being treated in black and white the most archaic, and polychrome tesserae and greater and greater plastic richness latest, in both cases presenting geometric motifs and zoomorphic.

How to zoomorphic is recorded in a room the existence of doves in different record what we can indicate a worship room, perhaps already Christian.
"In Pisões the iconographic program chosen to call" the two doves room "expresses an ornamental syntax deeply grounded and Nature, which uses elements of nature observed daily in place to represent the cycle of time, to spring a basket filled with rosebuds.
For the summer a wading bird (stork?) from the nest, protecting the two small birds who may soon fly. The Fall, with birds pecking a bunch of grapes and winter, the entrance to the room and in a prominent position, with two doves flanking a container filled with water, essential source of life, above and also in the region. Above this representation, a head of medusa, protection apotropeico symbol.
A single iconographic program today, and lifting a little the veil on the philosophy of life of terra.1 lords
Also villa Roman Rabaçal has a beautiful set of mosaics dedicated to the four seasons.
Birds are doves linked to spirituality, the bird went through a long process of Christianization. "In Greece, priestesses of Zeus were known as "doves". They are mentioned by Ovid and Homer. The dove was associated with the Greek Aphrodite (Venus of the Romans), symbolizing eroticism and sensuality. However, in Christian art, this image is gradually suppressed, being replaced by the image of pure and chaste woman, exemplified by the Virgin Mary, antithesis Venus. In Christian art, the dove figure already in the Roman catacombs in the early Christian era. Represented the divine spirit of Jesus, the third person of the Trinity: the Holy Spirit. The bird is the one who carries the message of a new beginning for the Noah's Ark: the end of the Flood and the promise of a new life. Dove, symbol of peace and spiritual elevation, represented the figure of the Virgin Mary and also of the Church. In the New Testament, in Luke 2:24, appears the sacrifice of doves symbolizing purification of Mary after the birth of Jesus, "And offered in sacrifice, as was the law of the Lord, a pair of small pigeons ". All other rooms have geometric mosaics, but the Roman geometry, is not just a call to order and beauty, but also a reference to symbolic aspects. Pity is that the stucco fresh not allow its readability.
In the Roman ruins of Pisões, stands out together with the related water. Next the house there are the spa, which are one of the most important private baths specimens found in Portuguese territory, and whose compartments are in a remarkable state of preservation, as the whole heating system thereof, allowing the hot air circulation in double walls and under the floors of the rooms, which rely on a complex system of brick arches, called hypocaust. The pools are also wonderfully preserved.
The resort is set in Portugal, consisting of heated pools and a hypocaust that with small arrangements still be functional, is really impressive entering into his, because it appeals to the best that is in man, the mill, cleaning and pleasure.
In addition to the rare impluvium no peristilo, we have a large pool, almost an Olympic swimming pool (a pool of large dimensions (40 x 8,30 m.), with 6 access steps) and that would be filled with water and separating the operating villa mausoleums, almost replicating a river that separates life from death.

Next current ruins, across the current path of access to the site, we can find the Roman dam, that dammed the water of the stream feeding the chimney villa which serve to supply water for irrigation, confection for food or for tanks, pool and spas, of appreciable size.
This dam was built in stone masonry and mortar and had a reservoir with about 340 meters long, 31300 square meters of flooded area, storing a volume of water 38000 cubic meters.
Contrary to what happens in most Roman sites, where there are no concrete data about its inhabitants, Pisões was found in a small altar or marble devoted to Safety, the goddess of happiness and health. There is an inscription reveals that the altar was dedicated by slave Catullus Gaius Atilio Cordo. So, is feasible that this name matches that it was the owner of villa at any given time of the first century A.D., Catullus being one of his slaves.

Of villa Rustic yet unexcavated, can only be observed the mill stones, with an interesting aesthetic aspect. The areas directly related to the farm, as the houses of the servants and warehouses - the call pars rustica - And the barns and mills - in part fructuaria, are, still, by digging.
A villa Roman of Pisões was classified as a cultural heritage property in 1970 and is one of the most remarkable villas Roman Portuguese. The Roman ruins of Pisões are very close to Pax Julia, this was one of the most important Roman cities of Portugal and current “a capital do “meeting pacencis”, in other words, the political-administrative and legal area that occupied the entire area south of the current Portuguese territory Tejo. Friend go to Beja and enjoy it to see the Roman ruins of St. Cucufate in Friars Village (Vidigueira), but beware of the heat of summer, because it was not by chance that the Villa Roman Pisões was built so beautiful pool complex.
Additional References:
1-ANIMAL SYMBOLS: DOVE AND CROW IN MEDIEVAL bestiary, Tiago de Oliveira Bruinelli (2009)
2-The Roman Portugal with the following article, on villa Rustic and field. 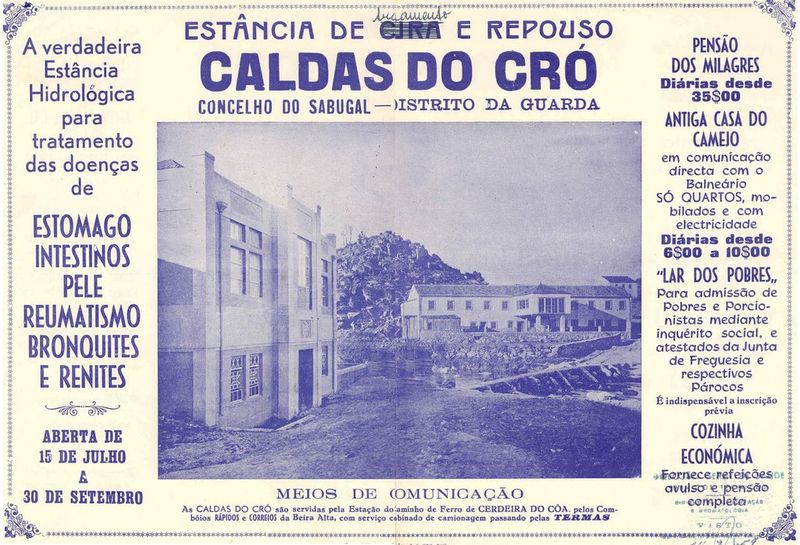 Regions of Portugal, Distrito-Guarda, Sambucus, Hot spring, All articles
8 the September the 2010

2014 was the best year ever in tourism revenue in Portugal

Castelo de Vide and Marvão, Regions of Portugal, Distrito-Portalegre, Tourist Guides, All articles
12 from April to 201022 de May de 2010