placed 5 the September the 2011 by Castile

Sacristy of the Church of St. Anthony of Groves (Coimbra)

Those who visit the church of Saint Anthony of Groves, usually gets a little disappointed because'd expect to see more beauty, but this is not always necessary displays and is looking for it, visitor but as we are here to help friend, ordered them not to depart now and try to visit the remarkable sacristy of St. Anthony of Groves, because it is a true architectural gem, its structure and especially by its decoration.

The sacristy is reminiscent of a small church with chancel. It was built in the first half of the eighteenth century and decorated in the second half of the same century. The body of the sacristy is rectangular with domed chapel.
The triumphal arch of the vestry has beautiful shoulders with fine baroque treatment culminating in a simple pediment; on the arc of the vestry can also see a picture of Saint Anthony Oil, whose unknown author claims to be the true picture of canonized. Reality or imagination pedantic? We do not know, because presumption and holy water, each qual you want to take.
At the bottom of the vestry, on the altar, an oil painting of Pascoale Parente, painted in 1796, representing St. Anthony to abdicate the monks and take crúzios Franciscan habit. 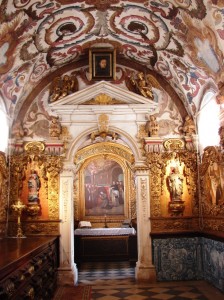 Relevant work of art is not the jettisoning of Baroque tiles, Cobalt Blue, manufactured by the same artist who made the church walls. Are flamboyant, Baroque, but rather level, with poor execution and our holy equal figures and all the rest of squint; to honor and salvation of the photographer, we will say that we would not do better, well but for us to draw a straight cable is the work.
The vaulted ceiling has a nice pictorial composition, a fresco, with winding Acantos, having a crest in the middle of a bishop. Large windows positioned in the sacristy provide abundant light (here is a point where I focus whenever I get to a temple and the unwary tourist board to do the same).
On the left side of the sacristy was built along the wall a mobile magnificent eighteenth century, in Brazilian wood inlaid with ivory on the top.
On the chest of drawers is a series of screens with themes depicting the life of Saint Anthony, work of a reasonable painter, with shrouded with beautiful paintings and gilded baroque frame. On the right we have: the episode of the attempted poisoning; San Francisco allowing San Antonio to teach theology to the friars and Saint Anthony in his first preaching in Forli. The left side frames represent: the miracle of bilocation; the miracle of the foot cut off and the death of St. Anthony.
Before leaving still advise you to visit the crib, a little fashion Machado de Castro and the remains of the crypt.
Soon, depart then still laying a look to the cemetery, where friends are dead.
When descending the stairway we think that death is often associated with the works of art and probably is such an important issue that a piece of what we build is based on this abyss of "Nothing", but flee to the subject because what we want is cheek.
But death does not leave us and is always ahead of us. This is the case of this beautiful groves of Cruise, located in the lobby of the background escadório. Here the figure of Christ is calm and realistic and nailed to the cross waiting for death. This anatomy is so perfect that one friend who accompanies me says it might be too blameless, do not know, here come the photos and decide for yourself.
This beautiful representation of Christ was built in 1536 by Norman sculptor Jean de Rouen. However, Statuary was not just the image, but also performed a pavilion that housed the sculptural group. Reparation on the pillars are carved with decorative elements of the Renaissance. 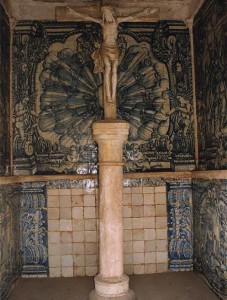 In the eighteenth century the pavilion was closed and the interior walls were lined with blue and white figurative tiles with scenes of the Passion. Represent the Prison and the Way to Mount Calvary, Prayer of Christ in the Garden and the Flagellation. On the back wall behind the cross was put up a radiant sun. As the narrative tiles are from the same era that the nave of the church, must belong to the same artist banal; poor man who has buried deserve not appear so on the internet so badly treated!
Let us then, Now let us go down the street and Bernardo de Albuquerque to the Monastery of Cells that has a cloister with historian capitals of very good quality (**). Yet we stop in the ancient Parish of Groves, to see the Center for the Study of St. Anthony with a good share of the booty to be given by Mr. Alfredo Bastos, which also provide its collection for recall of Queen Isabel (read it here).
Other Information:
Rating: The church of Santo António dos Groves is classified as a Public Interest
Free admission
Phone: 239 711 992 / 239 713 938
Email: santoantonioolivais@gmail.com
Address: Largo Padre Estrela Ferraz – 3000-083 Coimbra
Notes: http://santoantonio.com.sapo.pt
GPS info
Latitude: 40.21797
Facility: -8.40434