Shrine of Our Lady of the Assumption

Sanctuary of Our Lady of the Assumption in Good villages, is focused in "History of the Ways" Joel Cleto, Jose Hermano Saraiva our northerner in the program on. This is part of a temple of 62 Notable places in the district of Bragança.

The Sanctuary of Our Lady of the Assumption is the largest and one of the most important Marian shrines of Tras-os-Montes. Built in the nineteenth century at the top of a hill that dominates the surrounding landscape, is one of the highest points of the county, about 760 meters of altitude. Its history is ancient as it has existed a fortified settlement of the Iron Age in this magnificent hill. It has a single nave church and rectangular chancel, several chapels around the enclosure and a monumental staircase, all wrapped in huge clumps of forest. "-Shrines and Viewpoints of the County – Municipality of Vila Flor

Brief Historical review of Shrine of Our Lady of the Assumption

It is known that on the hill where is the Sanctuary of Our Lady of the Assumption there was a fortified settlement of the second age of iron according to the following facts: topographically prominent location, traces of wall (despite the news that fact be unsafe), broad visual field over the region with strategic control of fertility of the land around and natural pathways through which people and goods transiting. Unfortunately all the hill needs of archaeological research. The town can be traced back to the Bronze Age. The construction of the sanctuary over the last 400 years and the very influx pomegranates and tourist people can have forever destroyed important archaeological remains.

-In resplendent Treasury Room of the National Art Museum in Lisbon guard, among other relics, the superb torque Vilas Boas, the ages of the first century BC and the III- Read here a scientific article on the same.

Its discovery occurred in 1965 Sanctuary in southern slope of Our Lady of the Assumption; I would strongly recommend to all people of Vila Flor to visit your Torque in Lisbon, because it is one of the beautiful pieces of jewelery from the European Iron Age.

-In addition to the torque was discovered in 1967 a large berrão granite and today is in the Municipal Museum of Vila Flor (read here in great find Vilar Flor), all the news. Is carved in granite medium grain and some large crystals of feldspar. Co 1,5 meters long and has a maximum height 1,3 meters.

You can read more details here some Berrões of the following articles in Portugal Remarkable: 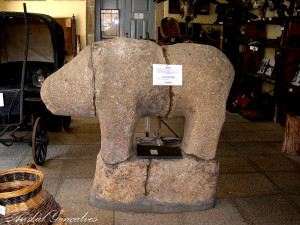 It is always a pleasure for the senses and for obtaining peace of mind, the informed traveler journey deep into the Bragança district. The Shrine of Our Lady of the Assumption, is one of these places, it is religious knows that this is the most important Marian shrine transmontano; but s is andnot just see the magnificent panorama and be rapt.

Then I ask that you please follow me and watch this huge gazebo quartz ridge, will flying here and there to taste the wrath tectonic. The Shrine of Our Lady of the Assumption be seen from a rare and vast landscape, covering the mountains of Montesinho, Bounds, Mirandela and neighboring towns and villages within a radius of tens of miles. Anyway a good part of this savage and pure region, that politicians insist on dismembering (for example with the construction of the dams on the Tua River valley and the Sabor River).

The Sanctuary of Our Lady of the Assumption was built in the nineteenth century due to the appearance of the Virgin Mary, At last poor thing, upset, want that bad of humans encarrilem on track, but times were, are and will be dark, because this breed of guerrilla little man is changing; Forgive the delay always Vulgaris, but also true. Let us then turn to tireless lady also walked around here and do not judge, the Fatima having exclusive, because so fabulous stories related to the Goddess (This word does not come here on a whim writing) have appeared a bit all over the land in good Portuguese; here's another narrated in own website Shrine of Our Lady of the Assumption.

"The day 4 September 1673, as well as 7 and 8 the same month and year, dates are plotting the course of this famous place dedicated to the Blessed Virgin Mary. Before the apparitions to the girl Marie, Sanctuary was reduced to a small chapel, Abandoned, where in summer the cattle were gathered. As in other places of Marian devotion, Also this place, a girl was a fruitful link between the divine mother and men who had forgotten their home there as well on top of the sacred mountain. Our Lady three times as above stated, em different places, source Ribeiral, Monteira threshing floor and place the Cruzeirinho, messenger appeared to Mary, giving you the following mission: go and tell the people of Vilas Boas that I am unhappy with your experience in faith and who left the state to get to my house. They make it fast and treat my house. From appearances, the temple was rebuilt, increased faith and miracles multiplied, Sanctuary has become a pilgrimage site and great Marian devotion. Well you could say that the sighting was the first big moment of this beautiful place is it going to turn into the most important Marian shrine of Transmontana Province ". http://santuario-assuncao.pt/

Of 1712 a 1843, as recounted Pinho Leal, in Portugal Ancient and Modern, the Sanctuary of Our Lady of the Assumption was reduced only to a small chapel, composed of altar-mor, two side, a steeple and a bell. We can consider this time Sanctuary of stagnation as.

From 1843 until the last decade of the century. XIX, lived up the second great moment in the building of this place. In this period, made up the great buildings of the sanctuary can say, without any doubt, the second half of the century. XIX, is the structural Sanctuary moment. What today is their architectural mark was erected between 1843 and 1893.

Progress continued throughout the twentieth century. Popular legends refer to this place several apparitions of the Virgin Mary and even the legend of a car carrier of the divine image bois, who insisted on climbing to the Cabeço.

In the Sanctuary of Our Lady of the Assumption is celebrated annually three cyclical festivities: the Solemnity of the Ascension (May), the Great Feast of Our Lady (15 August) and the Feast of St. Euphemia (September). The second is the most important.

If all the world's ways lead to Rome and Europe to the St. James, all Tras-os-Montes roads lead to the Shrine of Our Lady of the Assumption. We are therefore faced a place endowed with a great sacred significance for several centuries aggregator of regional communities.

-Shrine of Our Lady of the Assumption.