After having described the spectacular Romanesque church of Adeganha, turn to the Shrine of the Lady of the Castle (*). Traverse the edge of the Plateau Adeganha in estradão desengonça that our poor car! Of the three “castles” indicated by the people-Moorish Castle, Junqueira and this, I go to the most convenient; nevertheless, I repeat, poor viatura!
The granitic environment is harsh with Carvalhas, junipers and executioners, sometimes skips ahead of us a partridge. Ideal for cobras Local, robbers, anchorites, aesthetes and thinkers.
The West, descomunais, thors granitic, a fragada, according to locals, sometimes allow discern, abruptly broken in the fertile Vale to Vilariça (**).
The Sanctuary, powerful miraculous fame consists of a main chapel, the Lady of the Castle and a lower, that of St. John, located on the hill like a nest of eagles; the people are affectionately calls him Johnny. Was the patron of ailments. And did not take expensive, enough your little hat certified wheat… 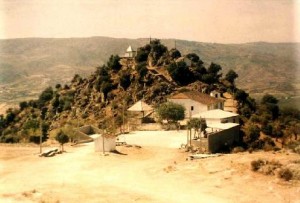 As if diz, the chapel was built in the sixteenth century and it was still listed Moorish temple before being Christian.
The Chapel of Our Lady, most, gets below a vast yard.
It is a space littered with stories (like the lilies that later tell (if the reader is willing to read long articles as) and archaeological remains. The site had Chalcolithic occupation until the Middle Ages, being the most significant findings in the Iron Age; here and there are still observed traces of sections of walls.
In mid-eighteenth century, said Father Luis Cardoso “at the site in which it is today Lady of the Castle, there was once a great city, which still find themselves part of walls” wings and garden Additional” the stone that looks like a lot of ruins of ancient fortress and claim to be a house of mouse”.
Here walked the Abbot Baçal finding archaeological remains, and second this "is very common along the slope of the hillock S. John and after the winter rains meet up fragments of decorated pottery, stones rigged. "
The legend of the Lady of lilies
An old woman passes with a azémola, slight create dialogue, the principle suspicious, after friendly because no one can resist the sympathy of this your photos! 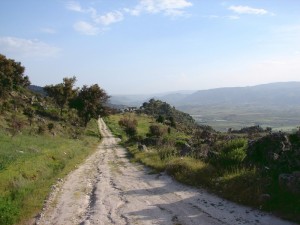 Tell me the legend (the miracle) associated (re) construction of the sanctuary.
“There are already many, years, came here to guard the flock one shepherd nearby. After chegava, entered the chapel and prayed to the Lady of the Castle. Dava Dó, to capela! Have rained on the altar. And the foxes acoitavam up there at night. One day Our Lady smiled. He was very frightened shepherdess! But soon the Mother of God quieted: “be not afraid, my daughter. Like much of your visits. And I want to ask you a favor. To the people of the Valley and Fragada to come here and pray that compose me the chapel says”. Asked to believe her as a shepherdess. But soon the Lady quieted a promising sign.
Soon she was up there. And where was not, sent. The following Sunday a lot of people came to sing and pray to the Lady of the Castle. Until Mr. Father, with the stole and holy water, was not the Devil weave them. Lamented the entire state of disrepair it was in the chapel. And soon made public collection to compose as before. Suddenly shouted the pastorinha: “Look at the hill of St. John”. Everyone looked. Even the sheep! So great was the outcry, which still, at certain times, it echoes off the Fragada. Hill of St. John was all cobertinho of lilies! And since then, until the day, always flourished here in May…”1
Poetic Lender, Lady with the stubbornness that is that there should be a true pilgrimage to “Our Lady” and not to the Cova da Iria; but the pilgrimage, without the crowds of Fatima, today there, on pilgrimage to the lilies and the Lady. The party carried out on the third Sunday of May.
Almost forgot to inform the reader that the reason for our trip to the place began as the imposing panorama of the local, on the tectonic Vale da Vilariça (**), with the estates of Terrincha, da Silveira at his feet. But the strong image that I retain is another.
Mau degree my side agnostic, moved me deeply spirituality (More than religiosity) the peasant with his donkey, moving away, going down the steep hill; bucolic part in the vastness of time and space lost, We collect our smallness and plunges into the depths of “my” sacred. It's almost night and just a blur of grief moves the distance. A new wave, we're alive, eu, Lady Mary and the donkey. Let us detached!
Source of Information – “Messenger of Bragança” of 25-05-2006, a text taken from Sr. Father Joaquim Leite. Maria.