Viewpoint of the limestone Sierra Alvaiázere (*)

A saw Alvaiázere, is the highest peak of the range of limestone mountains situated between Condeixa and reaching Alvaiázere 618 meters. Has a length of 7 by 3 Km wide and is a remarkable landscape element. From its summit attains a fabulous panorama.
The Geology of the Sierra de Alvaiázere
The Sierra is composed of hard limestones of the Middle Jurassic - these are the same rocks which form the highest points of the Natural Park of Serras de Aire and Lamps (***) and karst environments that formam fields lapiás com, caves, poljes, sinkholes, Algar etc.. This same lithology, in the region of Canterbury, extracted up the famous Stone of hip, virtuous for the manufacture of statuary; used primarily in the Renaissance Coimbrã.
The mountain owes its presence to differential erosion - limestone tougher than the host rocks, more clayey (marly) and also the tectonic constraints - all Serra Alvaiázere is limited by a great fault scarp, the source, with direction N-S.
The Sierra has geomorphological aspects that deserve your attention as the field lapiás undeveloped, potholes and limpets, and a small cave called "Algor" forming a vaulted hall with eight feet tall, receiving light through a small sinkhole that contains stalactites and stalagmites.
All saw Alvaiázere is a geomonumento that deserves to be rated and most publicized.
Biodiversity of the Sierra de Alvaiázere
This is integrated in the Natura 2000 and consists mainly of shrub-based executioners; there are odorous rosemary, oregano and beautiful orchids ... In some natural cavities (little flame and Algar) there should be different bat species, some priority conservation.
Archaeology of the Sierra de Alvaiázere
Sierra Norte still exists a prehistoric remnant large designated Career Horses. These are two belts of partially demolished walls with circular shape, with 100 meters in diameter. Probably, found at estate, fragments of bronze, remains of decorated pottery and lithic materials of different types, would be a settlement of the Bronze Age. But we need more archaeological campaigns to better study the location. 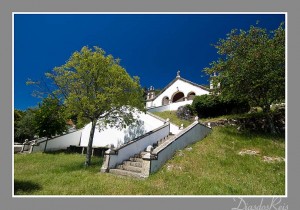 Overview saw Alvaiázere
At its peak there is a grand panorama. The Middle where the fault scarp is more imposing, with the upper slope 300 meter shows the floodplain and the village of Alvaiázere, with its large olive grove, well as a good portion of the Cordillera Central mountain range to the schistose Lousã. In the western foothills, is wide depression Bofinho whose origin is related to karst processes; more distantly the fertile plain of Nabão, the classic saws and Rabaçal, the limestone massif Aires and Lamps, and behind that shines out the silver fringe of the Atlantic Ocean. Finally a view of 360 degrees at their disposal which ranges from the mountains of the Serra da Boa Viagem Lousã. Amazing!
Due to its structure the saw has a renowned track paragliding.
Legends of the Chapel of Our Lady of Covões (Alvaiázere)
Since the rise Alvaiázere Sierra is done on paved road, halfway we find the simple religious temple originated in the eighteenth century, where there are two curious legends associated.
Legend of Pastorinha
According to popular tradition, pastor of a small Sierra guarding his flock when he found the cave, next to the Chapel of Our Lady of Covões, the image of the Lady of Memory. The girl thought she was so beautiful that took her home with the intent to play with her like a doll. However, repeatedly, the image disappeared and the shepherd would find it in the same place where had taken. The news spread through the parish and the disappearance of the saint became a miracle.
Legend of Our Lady of Memory
According to popular souvenir, appeared in the cave next to the Chapel of Our Lady of Covões, an image of Our Lady, that the people he named Lady of Memory.
On site, was placed an image of the saint and his feet is an iron chain that have been placed there by a Christian prisoner of the Moors. Legend has it that the Christian woke up one day and noticed it was no longer in the same place where he had fallen asleep, but in a cave and from the enemy. With the image of Lady of Remembrance in front, currents deposited there as a sign of gratitude for the miracle of your freedom 1.
What is your interpretation of these two legends? I have my explanation, obviously subjective, I reserve for later.
Consultations:
1) www.floresdocampo.weblog.com.pt
Note: As I did not take the camera on the Chícharo Festival, had to be borrowed from the Day of Kings.
Boa Viagem!