The beautiful Solar dos Távoras discover that ruined, was built between the late fifteenth century and the beginning of the sixteenth century, the behest of Tavora family that is linked to the history of the town of Souro Pires since its inception, being assigned its foundation Soeiro Peres Tavora.
The Solar dos Távoras Have rectangular, facades arranged symmetrically, and the assembly further includes a separate chapel, square. The main facade is bounded laterally by two towers, being the smallest central body with two floors of the towers and the sector with three.
Solar dos Távoras is an architectural stylistic blending with feudal elements and rebirth
The medieval military architecture led to the stately mansions tower, simultaneously as part of the defense and housing, that with advances in pirobalística in the sixteenth century lost their primitive functions, becoming a sign of importance, noble lineage and power of the family possessed. 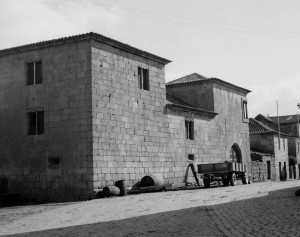 The principles of wise Renaissance architecture reach the solar from the sixteenth century based on the work of Andrea Palladio and Sebastiano Serlio, not of solar Távoras is materialized in its four windows, worked into beautiful wreaths with plant motifs and marble mullioned.

Large and regular walls and the small number of openings are characteristic of the Middle Ages, but the treatment of these openings is now typically Renaissance. So manor of Távoras in Souro Pires is a rare case of stylistic hybridity transition from feudal warrior style to Renaissance scholar.
On the left side elevational, there is a portal on the perfect arc, access to the inner courtyard of the house, and the building of the chapel of Our Lady of Hope, the private temple of the solar plant has square and arched portal. The whole lot is stripped.
Despite his sobriety and ruin, is one of the most beautiful palaces of the century Portuguese five hundred.
The building is also evocative of tragedy of Távoras, because it belonged to them and most likely from that date declined.
SOS for Heritage Solar beautiful of Távoras
The building deserves to be recovered with enough urgency because it is in dire state. Already missing the deck on the second floor and the upper floor has lost ground and most of the coverage. What to do to save the monument?
How about we begin by removing the recycling center leaning against the facade?
Photography taken from the site of the National Monuments, because the recycling center would not let us take a minimally acceptable photography, but hassle!