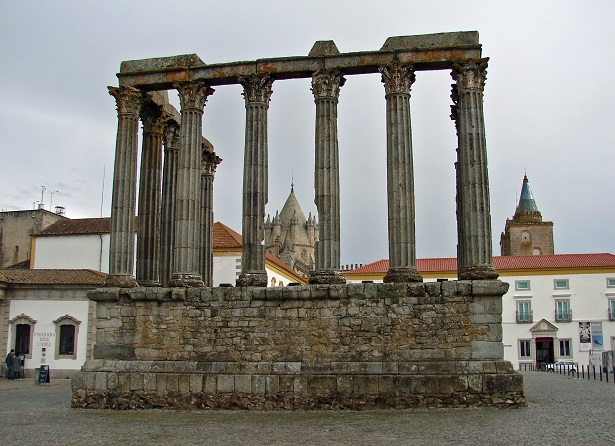 Other traces of "temples" Romans in Portugal: Marialva (Meda), Conimbriga (Condeixa-a-Nova), Temple Egitánia (Idanha-a-Velha), Are Cucufate (Vidigueira), Lisboa e Beja.
Although the Roman temple of Évora is often called Temple of Diana, it is known that the association with the Roman goddess of hunting originated from a fantasy created in the eighteenth century by Father Manuel Fialho. Actually, the temple was probably built in honor of the emperor Augustus, who was worshiped as a god during and after his reign, the temple would then be used for the imperial cult. It was built in the first century d.C. the main square (forum) Evora – then called Julia liberation – and modified in the second and third centuries. The Temple of Diana was degraded in the fourth century, during religious persecution carried out in the time of Emperor Honorius.
Subsequent to their vandalism must have been built on the fortifications of Évora, in periods Visigoth, Muslim Hundred and First Independent Portugal, after being transformed into a set of public butchers, By charter of Queen D. Beatriz Castle, wife of D. Afonso IV.
From this temple eirado, launched Patriots master Avis against Alvaro de Oliveira and other judges of the allied city of D. Leonor Teles numerous bolts fired and other paraphernalia of war, that forced the surrender of the castle and its partial razing.
Was transformed into solid rectangular tower plant, presenting a Manueline campanil, of running but, the north face, in the year 1836, Nele crashing the butchers.
It is interesting to inform you that the fate of two of the greatest icons of monuments Alentejo cities served to such mester, I also mean the loggia of the church of Mercy of Beja (*).
Arguably it is the successive use of the Temple of Diana as tower and butcher was essential in preserving.
In the year 1870, the monument was clear, reintegrating, as much as possible, their original lines. 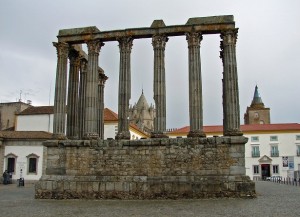 Temple of Diana in Evora

The original temple was probably similar to Maison Carree de Nîmes (France). The podium is structured in an area 25 m long, 15 m in length and 3,5 m height, em Cantaria granite of irregular Aspet, the so-called uncertain work. And the columns, this Temple – one of the best preserved of the Iberian Peninsula, apresenta colonnade in intact, comprising 6 columns, architrave and frieze fragments in its top North, while on your side The. arise only 3 entire columns – of which no helm and base -, fragments of the architrave and frieze. As regards the typology, are Corinthian columns with fluted shafts. The columns are based on circular bases of white marble Estremoz. Regarding capitals, they present themselves in the same carved marble, with decoration structured 3 Order Acantos and abaci, ornamented with rosettes and flowers, as marigolds, sunflowers and roses.
The basement lies collapsed in the southern part, in the area of ​​the staircase.


More recent excavations, particularly those targeted by Theodor Hauschild, revealed that the Temple would be surrounded by monumental gateway and a mirror of water U-shaped, and inserted into an enclosure bounded by walls or walls.
As the area of ​​the water surface is still relatively well preserved, despite being covered, why not put it in the clear, it would further enhance the monument.
Located in the highest part of town at Largo Conde Vila Flor, in the historical center of Evora which is classified as World Heritage by UNESCO since 1986, is surrounded by several notable buildings: Sé de Évora, by the Inquisition Court, the Church and Convent Lóios, The Public Library and the Municipal Museum.
The Temple of Diana is one of the most famous landmarks of Évora and a symbol of Roman presence in Portuguese territory.
Briefing Notes:
Free access, Can not take the podium.
Additional References:
1-The night photography is excellent blog astrophotography by Miguel Claro
2-Champion of the blog removed the photograph of the body of water surrounding the temple of Diana
3- Blog missing monuments removed some earlier photographs remodeling the monument.