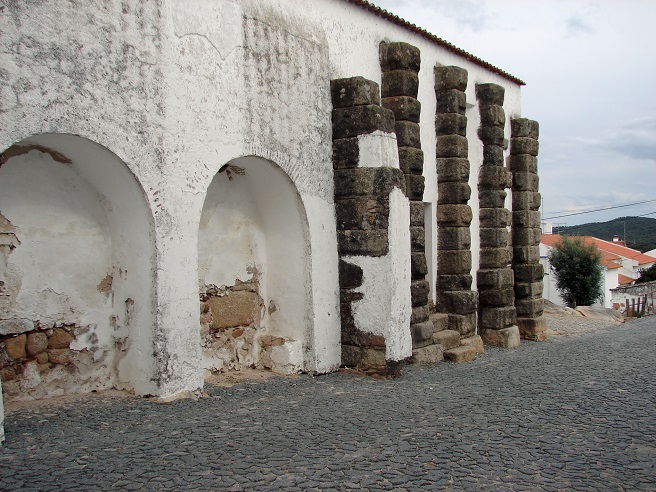 After visiting the castle and the Arraiolos Convent Lóios (*), which is currently a great hotel unit went to a small village , in the municipality of Arraiolos to observe the Roman Temple of Santana do Campo.
Before going into the technical aspects of what brings us here, I have to say that I am not Alentejo by birth, but Alentejo spring, that give a good urban touch. Here the solitude and stillness of the plain give me spirituality, tranquility and even more patience. Not born Alentejo, is up Alentejo. And I decided to be a spring Alentejo, there that thought convenient and laughable, given little want to be here in summer.

In the village, is a unique monument -the Roman temple of Santana do Campo, built a church and it deserves our attention.
The Roman Temple Campo de Santana is one example of Roman buildings incorporated into other buildings that can be religious, Military (ex- Roman Temple of Idanha a Velha, inserted into the very old Templar Tower); civilians as the Roman temple of Marialva (Meda) inserted in a building of medieval origin. These temples enjoying not only the existing structures as well as the location of symbolism.
The church was built during the fifteenth century, deduced from the statue of the Virgin, Lady of Santa Ana. Has in his porch to date 1715 that duty fell on a major remodeling in the eighteenth century. 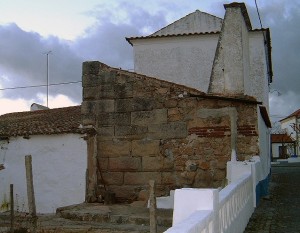 But what interests us are the facades N., S. and E. marked by the sequence of granite pillars of masonry cushioned, with square section, that reinforce the walls of imposing Roman building. In an annex backyard also observed Roman masonry.
In the minutes of a session 1734 the Royal Academy of Portuguese History, reads that the Frei Afonso Father of the Mother of God Warrior informed his confreres that had managed to read, one of the rough stones encased in the outer wall of the Campo Santana Church, a little understandable wording:
CARNEO
CALANTICE
SI CAECILIA
OR OR COOK
R • COOK
It is the Father Luis Cardoso, no seu Geographical Dictionary (I, 1747 ) the draws (which is very rare in his book) and tells us that the parish is patron Santana… And the chancel and the Church made of stones marked greatness, drawn, and manufactured; has lime to the roof and say was the work of the Romans, what appears to be evidence of a marble, where are some Latin letters, this way:
AFCA
NANII
IERME
LAVS
Is another piece of stone, what appears to be some building, in which, to be broken if only come the following letters:
CARNEO
CALANTICE
It is noted that in 1916 archaeologist Vergílio Correia studied the building, confirmed the importance of age-old ruins and admitted, with scientific bases its features, designed a tentative plan and assigned, the TEMPLE, the cult of "Carneus", but in fact we know there who is this such a Carneus!
In 1980 was also collected, following sanitation work, diverse archaeological material and detected-remains of a wall that could belong to the podium of the Roman temple of Santana do Campo.
I have read that the Roman temple of Santana do Campo have been built between the second and third centuries d, but is this the correct date?
May be acceptable to argue that the Roman structure could correspond to a Roman temple in a small town (ranch), by its size and structure but also by her discovery epigraphy. The two inscriptions found on the walls of the church are currently lost, but whose transcripts are considered reliable, a recorded to invocation “Carneus Calanticensis” (1) 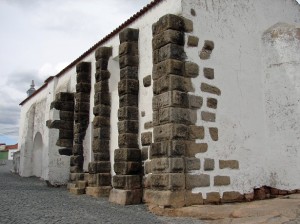 No theonym Carneo Calanticensi are different elements identicam-dois:
the first, the deity's name, whose etymology came to be suggestively related * Karno "cairn", abundantly represented in Celtic languages; the second corresponds to an obvious epithet, since the termination -ensis indicates a place toponímico. Due to this it follows that the current Field Santana would, in ancient times the small Roman town of vicus Calantica.
This church constitutes an example of an existing building on our territory that reaproveitaram and reused a space long sacralized, while if appropriated a certain magical-religious symbolism coeval.

The cult of fertility Santa Ana
One last note to Santa Ana, mother of Mary and grandmother of Jesus that in several places the Catholic world appropriated, as the Santa Ana, can be a divination cult of fertility is the earth or woman, because fertility was important and determining factor for groups and societies. The power to generate, food and renew itself is directly linked to female. As for the divinity of attributes, it would protect the Calantica. If we can relate it to God Gallic Cernunnos, god of agriculture - which was invoked to obtain good harvests, it will be difficult garanti-lo, given the lack of evidence but if so there would be a link between Santa Ana and the Roman temple of Santana do Campo. 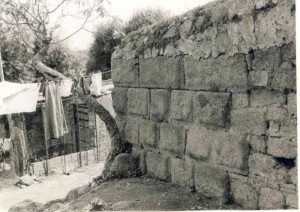 The Stone of feeders, phenomenon litolatria
To further thicken the mystery much of the Roman Temple of Santana's next field is the Stone of feeders, litolatria monument that deserves our attention (just as is the Valentine's Rock in St. Peter Curval (read it here)), to have at the top a circular depressions that pits should be a function of rock altars to pagan rituals, unknown age and still have a number of crosses in the rock insculpidas. Not sure when the origin of the cruciform, the hypothesis of these crosses were put under the control of the clergy to Christianize the rock seems unlikely, because usually when that happened carved up or enxertava is a visible cross larger, as exemplified in the aforementioned “Valentine's Stone”, so these cruciform may have been saved from the Neolithic to the Roman, is the question. The Latin cross has an esoteric symbolism, with much older than Christianity origin, linked to “death-resurrection” initiation. The stone Talisca, to this 300m, contains in addition to a series crosses, two “Goose legs” surmounted by a cross. The reasons recorded in Penedos of feeders and Taliscas were similar to the sets of prints, with the Boulder Almoinhas in Brotas. What relationship exists between these rocks and Roman Temple of Santana do Campo?
The Roman temple Campo de Santana is a National Monument. 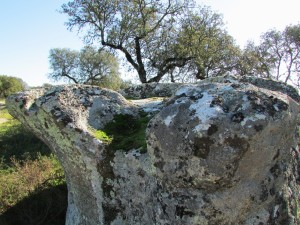 Additional References:
1-INCARNATION, José d’ – Indigenous deities - the númenes our roots. In LOPES, Bruno, org. – Conversations around Santana do Campo. Lisbon : US Social Association of Santana do Campo, 2010. p. 27-38
2- The photos do Penedo the feeders were removed from Frances M Blog friendly. his name Sulidão (here).
3-Alumas notes about the Roman temple of Santana do Campo were taken of Portugal's cultural heritage site, and the apreto and white images.
(here)