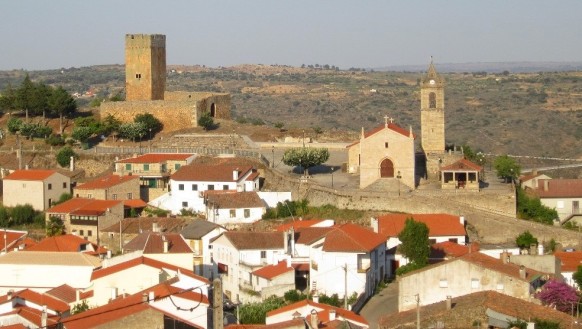 In my penultimate visit to Longroiva, in the county of Mêda, in 2008, I like cicerone the pastor Anthony Lover, much knowledge and patience to visitor as Interrogator, pass away in 2010, for him wish a beneficent rest.

Longroiva is a beautiful village with a magnificent spa, a Templar castle founded by Gualdim Parents and other interesting heritage as two churches and an idyllic and beautiful source manuelina.
Notable Baths of Longroiva, as well as the spa Fonte Santa (Almeida) (*) e do Shutter (Sambucus) (*) They were recovered to streamline tourism in Beira Interior, having today magnificent conditions for treatments. In the first worked intensely in hydrogeology with personal stories, It is so Longroiva a location that is part of my sentimental geography; the remaining spa also met quite well, more like visitor and curious than as a scientist.

The splinters Longroiva
The village had remote occupancy, finding indicates how, Call stele in Longroiva 1966, the site of the Old Cruise, the village entrance of a tea Quintãs, in full tectonic depression Longroiva. There is shown one inscultura an old warrior Bronze, in the same place they were found more recently two other stelae.
For all the hoop Longroiva abound ceramic artefacts and traces of iron smelting and tin, but the most important archaeological remains are Roman.
Longroiva Romana
After my studies I returned to Longroiva more often. A time our good father took me to the Templar origin Chapel Torrão Lady to see his altar has a Roman altar that narrates the following. “Quinto Júlio Montagno Gémina Félix, willingly fulfilled his vow to Bande Longróbico ". Fifth Julius, second thanked an indigenous deity. The Gemina Felix is ​​no more nor less than the Seventh Legion created by Galba, who became Emperor for a few months, who walked against Emperor Nero, It is based on loss of this. As Galba was the mentor of this VII Legion was also called Legion Galbiana, that would be hived off for centuries the only Roman legion in the Iberian Peninsula, whose central headquarters was located in Leon and there are many traces in Portugal. For example VII Legion built the Roman bridge over the River Tamega, Chaves, then called Aquae Flaviae, ali stationed during or reign of Trajan. One of the best high Portuguese culture rock groups, Seventh Legion is named in his honor.

It is understood easily rise to the location of the place name. Longróbico would be a relative of Bormanico (Indian god associated the hot springs)?The truth is that this space probably due to the amazing hot springs would be a meeting place for treatments and also so blessed.
Longroiva would probably be a Roman castellum, where would our fifth Julio Montagno, perhaps taking advantage of a village. Could this fortification defending existing veins of sulphides or even the remarkable medicinal mineral springs site?

The baths have always been linked to the cult of Lady Lump, patron saint of the parish and, accordingly, people say that every day bathed in 8 of September, day dedicated to Santa, equals 8. 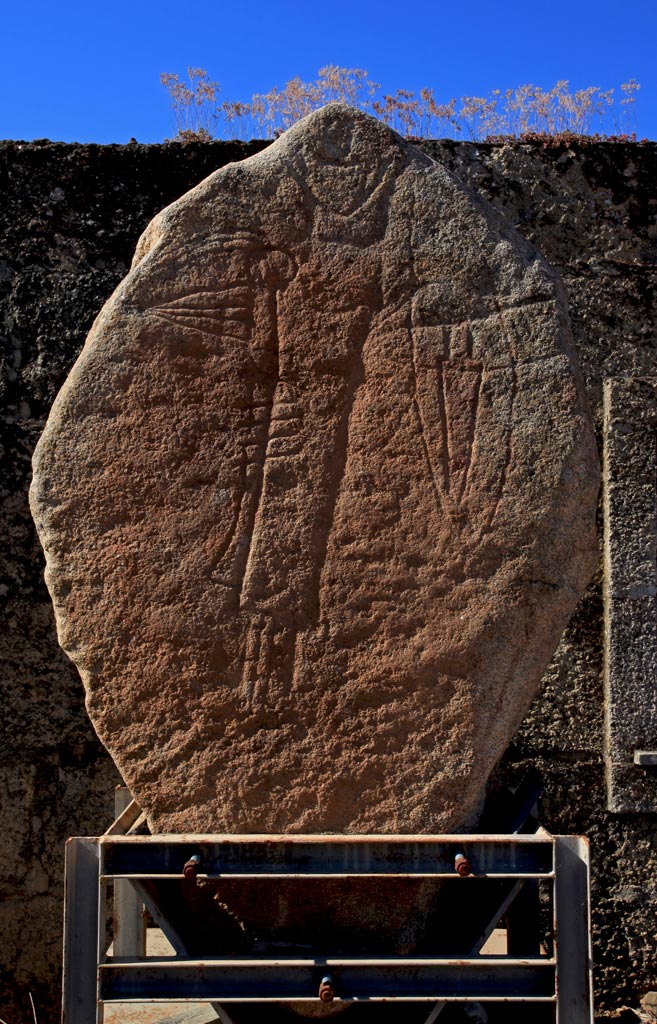 Still in the mother church is is- Built on the right side wall as you enter the front door of the church of Longroiva (county of Meda), with the sign horizontal, a Roman granite heading and that says "Potito, son of Reburro, fulfilled the vote to Lumbos ".

At the time of the Christian Reconquest of the Iberian Peninsula, this town and its castle are related to each legacy domains to Guimarães Monastery. Later the monastery belonged to the Portuguese Province, and consequently the kingdom of Portugal.

In this period, there was an outbreak and settlement in the region, assigned to D. Egas Gosendes Baiao, which is believed to have granted a Charter of the Foral since Longroiva 1126, and after, Fernão Mendes de Bragança (husband of the Infanta Sancha Henriques and, therefore, coined D. Afonso Henriques), which would have given these domains Longroiva to the Knights Templar (1145), and Master Hugo Martonio (or Hugo Martins, in Portuguese).This castle Longroiva (passive defense, It has a military architecture, Romanesque and Gothic.

Just past about 30 years, in 1174, It is introduced by D. Parents Gualdim a significant change in the original structure, the Homage tower. This has a title of its foundation that updated form tells us that tells us.

"Na was Caesar 1214 (in other words, in the year 1176 the era of Christ) Gualdim, CHEF of the temple Cavaleiros Portuguese, He built this tower with his brothers, reigning Afonso, rei de Portugal ".

When viewing the small castle, with the keep, evoke these Cavaleiros, strong esoteric collection, and comes to my mind the atrocious Friday 13 October 1307 boosted by the King of France, Philip IV the Fair and Pope Clement V; the symbol of Baphomet; the pentáculo- as a symbol of human spirituality; implemented the curses of the Grand Master Jacques de Molay; the demand of the Holy Grail; the origin of Freemasonry; the Portuguese discoveries; the discovery of America by Miguel Corte-Real, Knight of the Order of Christ in 1502, to majestosa Charola not Convento de Cristo (*****) Tomar and many other facts.

Longroiva also has the oldest hurdício of Portugal, precisely the dungeon, which is a wooden towers crowned grid or cloth of the walls to allow the vertical shot holes which fit to the wooden beams.

Apart from the Templars hurdício imposed the alambor as can be seen in the walls of Soure, Pombal and Tomar, but very especially the Watchtower. This was implementing in the middle of the room, at the point of highest elevation, rising in time to allow direct shot par abroad subject to the existence of the walls, quadrangular or rectangular plan with, They amounted to more than 10 meters, would be greater than 20 meters, laying on rocky outcrops. The ground floor had no openings, and that access to an upper bound was done by mobile wooden stairs, in case of danger could be removed, isolating the tower inside the enclosure itself.

The keep has become a symbol of power and an outstanding iconographic reference. As mentioned the earliest examples date back to the mid-twelfth century and are associated with the Templars, namely the towers of Homage of Tomar (1160), Dovecote (1171), Feathers Róias (1172) and Longroiva (1174), all of them with inscriptions dating from its opening in the master's

I have to confess that when I see a sign or location associated with the Knights Templar, I feel I am the invisible threshold of an indecipherable transcendence and how we are all in need of a healthy spirituality.

Dinis (1279-1325) Granted leasehold town, and, in 1304, He ordered to make some repairs in the castle. Still in his reign, on the Order of extinction, areas of town and its castle were incorporated into the heritage of the Order of Christ (1319).
Has in its enclosure a cemetery, as in so many other castles, which in itself it has historical significance and is almost a monument itself. 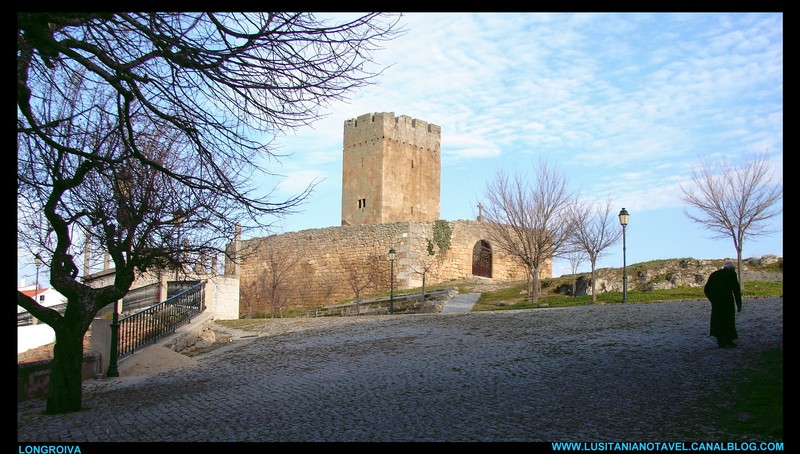 Longroiva is still personally associated with my first field work campaigns in geology. The baths are reclassified, are well known, and it is with some pride that I saw up the new bathhouse.
The Baths of Longroiva the new bathhouse and indications
The bore of mineral water which dated from 1975, with 20 feet deep was not in the best condition, this was done by a new hole 215 feet deep and perfectly galvanized betonado.
Because this hole exists today an abundant flow (6,4 l / s ie 23040 l/h), of fluoridated water and sulphurous springs the 46 degrees and are especially noteworthy, for a balanced chemism and the richness of fluorine; being recommended treatments for respiratory disorders, dermatoses, esquléticos and degenerative musculo-: among the various ailments which may be treated include the rhino-sinusute, psoriasis, lombalgias, rheumatoid and osteoarthritis artites.

With new facilities and a magnificent hotel increased the number of aquistas. The construction of thermal spa of Longroiva up smoothly integrated in the surrounding area.
Legend has it that Queen Santa Isabel will be bathed in the sulphurous waters of Longroiva, on the occasion of his coming of Aragon to marry, in Trancoso (***), com D. Dinis.
Continuing to speak of noble waters, I have a vision of the hill a geological rift that hosts one of the most interesting waters so far met. It is an authentic metal "net" league, paying attention to their extremely high levels of lead, magnesium, iron, molibdénio…; obviously mineralized water through the veins of sulphides. The waters are the most acidic of Portugal, perfectly unpalatable and dangerous for unsuspecting beasts. The people called this scientific curiosity "purging the waters". In the middle ages were a few drops diluted in a jug of water for healing of stomach disorders and anemias!? After a few setbacks the waters were sealed.
Also envision the Vale da Veiga, which is no more than the fault Vilariça, Here also installed, didactic grabben possible the existence of a great fertility of floodplain. This megafratura establishes contact between the Iberian Meseta and the Portuguese Western Mountains. Almost every Monday, 8:30 am to "greeted" in the year 2005, in Ribeira de Massueime of Hazelnuts in Ambon (Guard). The reader should also know the Vale do Zêzere to U in Serra da Estrela (***) in Butters, and that was one of the candidate 7 Natural Wonders of Portugal, therefore inform you right now that is the continuation of that fracture.
In hillock adjoining the castle, at a distance, see the site of the gallows, sufficiently distant not infecionar the population, but visible to all eyes to be a warning to potential offenders. I who am an almost banal photos I wonder the number of unfortunates who perished there and even their crimes!
Longroiva has yet another interesting built heritage: Igreja Matriz a (with your precious saves copper Nuremberg donated by King Manuel I), the chapel of Our Lady of Clod, the graves anthropomorphic, manor of Marquis de Roriz, the idyllic manuelina source Concelha or the Roman road coming Marialva (CIVITAS Arava) to Calabria and Astroga.
Longroiva has a very estimable heritage complex and now with the modern resort of the spa village, deserves our affection, this may be an anchor project for the municipality of Meda, towards its dissemination and promotion.