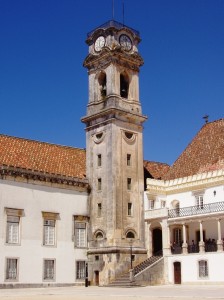 Project was the Italian architect Antonio Canevari, then recently arrived from Court, replacing the plan Gaspar Ferreira, however this would be as a master-builder holder of University.
Coimbra view from Sky
Are 34 meters and 180 degraus until you get to the awkward way with terrace, there in order to install the observatory recommended by the King and the relevant mathematical tools that is an astronomical observatory. Tower of the University of Coimbra attains an unforgettable panorama. Anyway is not Coimbra view of the sky, but almost. The views extend into the Central Mountain Range schist, for the soft fields of the sea, coming to see the silver fringe of the Atlantic Ocean stopped by the Serra da Boa Viagem.

As part of a visit to the Palace of Schools, The following are extraordinary monuments (learn about the contacts and schedules to visit this monumental set):