Did you know that the ... Tower Almofala is a grandiose monument that has impressed travelers for its uniqueness? Currently its origin is explained.
A Tower Almofala was built on an ancient Roman temple dedicated to the God supreme. In 1997 identified an ara of the early first century dedicated to "Very High Jupiter - the city of Cobelcos" (Helena Frade, 1998).
This is the ethnicity of the Lusitanian Cobelci, that having pre-Roman origin, was Romanized and here established their city with the status of Roman Civitas, was thus a capital city of a territory.
The civitas had a certain autonomy with a set of services, obligations and rights related: administrative, Religious and tax. So far the archaeological remains point to a small town. The Civitas Cobelcorum may have been built in the early Séc. I and was the administrative center of a region bounded by the North Douro rivers, Agueda to This, Coa west and the Sierra Marofa the South. 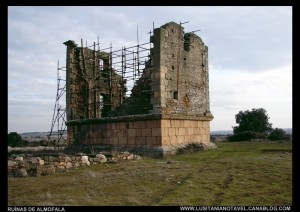 Around this temple was discovered several fragments of carved marble, pleated robes and a left hand holding a small box of grains of incense, em mármore, would correspond to a statue about three feet tall. It may have been a priestess of her hand, of an empress or a goddess.
In the High Middle Ages (Century V to X) was watchtower. In 1165 is donated by King Leo Aguiar monks who make it their watchman due to visual field, they would have on their breeding grounds in the region who also built the remarkable Monastery of Santa Maria de Aguiar (**). A Eagles Tower acted as a lookout post during the War of restoration and this was ruined.
Construction of the Tower of Almofala
The construction of the temple followed a Vitruvian model construction. Its Roman base (podium), tem that 2 meters high was built with large granite ashlars magnificently outfitted, completed by cornice molding or, the remaining Tower, which is very truncated, reaches six meters, is planed in shale, quartzite and granite of various sizes.
The legend of the Tower of Almofala
Here lived a gentleman who one day ventured into the cliffs of the river Agueda during a hunt, been surprised by a group of Moors who hovered around there. Na uneven luta, Noble dies, but one of the servants who accompanied him ran to warn his wife. That person was closed at the Tower, because the door could only be opened by her husband. If you draw near the window and seeing the Saracens approaching, decided to throw himself from the window, begging Santa Maria de Aguiar to forgive her and take her to heaven, despite the suicidal act, Santa salvo-a, putting a winged horse that has sustained the fall and led to safety. Thanks for all your donated goods to Santa and chief Hagarenes to witness the miracle was so impressed, who became Christ.

Around the Tower Almofala numerous archaeological remains abound, but what never fails to amaze is the serene beauty of the place appealing to our senses: with the Raptors today to overfly, with the mirror of still water Albufeira to Santa Maria (*), Green meadows and multicolor of spring bloom, somehow, Sheltered by Jupiter.