Did you know that the ... Torre Centum Cellas, Perth from Belmonte, was for years considered one of the most enigmatic Portuguese monuments?
A Torre Centum Cellas is a unique area in the Iberian Peninsula with an unusual monumentality.
With its rectangular shaped, its ashlars best equipped and its remarkable height, the building has been the subject of many speculative musings; since being built by the Incas to build by Sephardic Jews (the same who built Petra in Jordan) and this in full Beira Interior!
But almost always associated the scholars Torre Centum Cellas a Roman building what came to be seen by the excavations made by Helena Frade.
The Structure of the Tower of Centum Cellas
The construction in granite ashlar has rectangular section 11,5 m por 8,5 m com 12 m height. With three floors and is presently covered.
Downstairs ripping rectangular openings, doors that should have been, and small rectangular openings, difficult to interpret.
Today we know that was not a mansio (molting season), um headquarters (the nerve center of a Roman military camp) ou um mutatio (albergaria); early as the twelfth century it appears in the documentation with the curious name of percent cells, ie hundred cells showing that besides the tower constructions could be more appropriately organized
What then have been the Tower of Centum Cellas?
We certainly have been an important area of ​​a Roman villa, shooting to the southwestern flank and serve a large central courtyard. Until we know who possibly built Lucius Caecelius (does not resonate here topónimo Vecchia?) in the first century d.C. rich tin dealer. 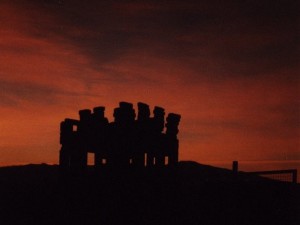 The excavated part of the villa includes the owner's residence and some layoffs and warehouses; have existed a spa and accommodation for slaves, that may have been lost with the construction of the road or a vineyard contiguous. We still, traces of a room with apse and altar larário or veneration of the gods Lares protecting the house.
The tower had a ground floor, possibly intended for storage functions, with wide openings, and an upper floor, where stood a single room, surrounded by a veranda with wooden roof and roof resting on columns of the Tuscan order, covered by a gable roof, had at its two sides in one talon pediment, giving him even greater monumentality and beauty.
The entire set had a fire in the third century AD. C., which may have given rise to various modifications, especially in the area of ​​the less resistant villa.
In the Middle Ages the tower was used and prolonged, building up a third floor with regular masonry facade also good with small stones. 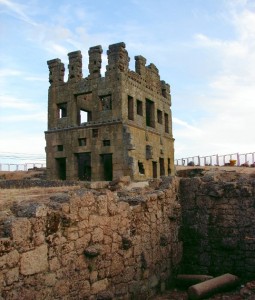 It is possible that in the medieval period torre de Centum Cellas played any role in the consolidation and defense of the eastern border of the kingdom of Portugal with the Lion; having also received a charter of Sancho I in 1188, which arises as referenced Centuncelli. In 1198 the county seat was moved to Belmonte.
What does the Tower of Centum Cellas?
The Vitruvian geometry this does not end here impressed by its ruggedness, plumb, esfíngico balance, making distant monuments that recall the Near East or Latin America like the Inca or Aztec.
During the Roman occupation the tower could have been a utilitarian-watchtower and / or single auditorium seating, aesthetic and brand power; more remote possibility is being linked to a sacred space since its orientation is peculiar with the angles of their edges directed to the cardinal points. This means that during periods of solstice larger apertures let in light with greater generosity, which seems to agree with its unusual air astronomical observatory.
Legend of St. Cornelius Centum Cellas
According to tradition the tower would be a prison, having been here we've been imprisoned St. Cornelius, who died em 253 d.C., should be the name of the space hundred cells that exist in it. Admittedly, this legend is just fantasy, however, space was Christianized in the Middle Ages with a small chapel, that there are foundations and disappeared in the seventeenth century, dedicated to… St. Cornelius.

Regions of Portugal, Distrito-Portalegre, Nisa, Hot spring, All articles
13 the September the 2010

Baths of Fadagoza (Nisa) (*)-The traveler knows what it means Fadagosa?