This is a rare torre medieval existing in Beira Interior, in Freixedes of Clod, and those who visit feel the vocation of medieval warrior man. The traveler can not help but wonder if ever the tower was besieged!
A Freixeda tower of Clod é robusta, quadrangular, hermetic three floors and well-equipped stone, having on each side a large counter with boulders and straight loopholes. The third floor tem the coat of arms of Metelos- presenting three triangles surmounted by frieze and an eagle. Was linked to the eighteenth-century manor house adjacent, as seen in the arc starter that supported the bridge to link and which was demolished in 1930. 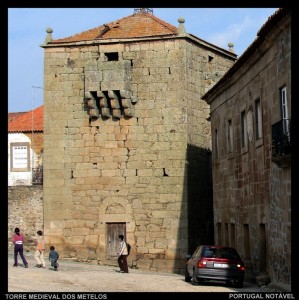 A torre-solar was built in the fifteenth century hair Metelos, Lords of Morgado Valongo, follows the structure of the towers of medieval castle keep, however not having any defensive nature, since this time the towers were elevavas as manorial symbols.
The remarkable tower requires rapid restoration.