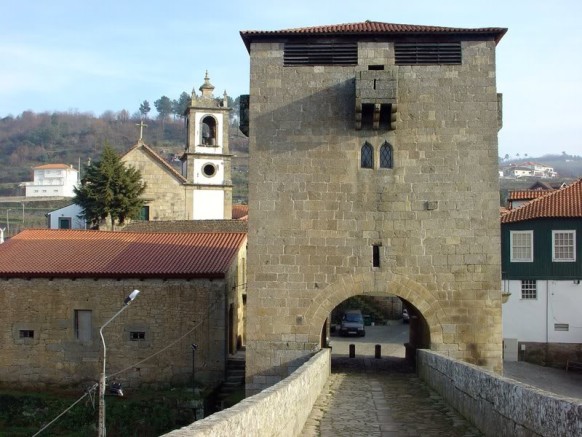 The tower and Ucanha bridge is a unique jewel of the National Heritage.

The Tarouca municipality should always be in good thoughts of the Portuguese travelers, by their monasteries, its medieval bridges, your landscape environment somewhere between the austerity of Demo Lands "and Minho and famous for its sparkling coquetry of Murganheira. Tarouca has a history that played an important role in the Portuguese Middle Ages. I reiterate the recommendation of a tour to the region as good monuments, delicacies and beautiful scenery.

On the slopes of the ridge of the Portuguese Western Mountains digging the river Varosa its valley, born in the mountainous area of ​​the county Tarouca. "The site is a most gentle beauty, succeed the Curtain of Trees, everywhere sneak narrow paths, is as if the landscape were taken from successive transparencies, throughout this walk-One Leg path that will lead to Ucanha, to Salzedas, Tarouca and the São João de Tarouca, undoubtedly one of the most beautiful regions that the traveler has found, throughout a rare balance, and cultivation space, housing and natural men dwelling ". (1) 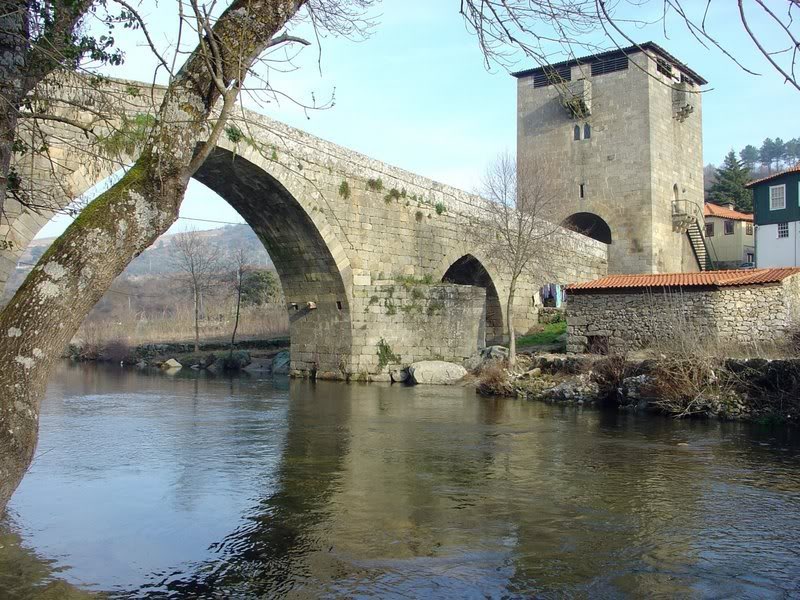 Ucanha bridge with its medieval tower

José Saramago was meeting the following notable locations in the county of Tarouca: the church of Ferreirim (ancient monastery church) (**), the bridge Ucanha (***), the convent of Salzedas (*), the mother church of Tarouca (*) and the monastery of St. John Tarouca (**). The Ferreirim church is located in the municipality of Lamego.

The most iconic monument of Tarouca is the tower and bridge Ucanha, the most beautiful Portuguese medieval bridge and is classified as a National Monument since 1910.
If the average age many bridges with fortified towers were erected, almost all disappeared, that was associated with the existence of a ban from 1504, gift by King Manuel I. In Portugal there are still fortified, Ucanha the bridge that is in perfect condition, bridge Sequeiros (*), the river Coa, Sabugal located in the county and also the bridge toll in Marvão (*).

Nobody knows for sure when the primitive Ucanha bridge, before this, Was built, perhaps Roman, for here I passed a road that connected the Lamego; maybe owner Teresa Afonso de Celanova, widow of Egas Moniz and Countess, founder of the Monastery of Santa Maria de Salzedas and named by D. Afonso Henriques to educate Infants D. Magpie, D. Mafalda and the future king gift Sancho I, ordered its reconstruction.

Descendant of a noble family Dona Teresa Afonso when, by volta of 1124-1126, entered into marriage with Egas Moniz, who had been widowed, should not be more than 15 or 16 years. Deceased husband in 1146, Teresa Afonso remain in Britiande, Husband areas of center, which is dedicated to the education of children, including the first-born of Afonso Henriques. D. Afonso Henriques donated, in 1163, the widow of Egas Moniz, the boundary of Algeriz, adding to it the territory of Ucanha the initiative of both, the construction was carried out starting from 1168 the monastery of Santa Maria de Salzedas, male monastery of the Order of Cistercians.

Certainties regarding this construction is that the cleric D. Fernando, 12No abbot of the monastery of Salzedas, bastard son of a brother of D. Nuno Alvares Pereira, Built in or rebuild 1465, Ucanha the bridge and its tower over the river Varosa. To his delight and everlasting glory, the gala to both sent forces to make a card with the Gothic inscription is still there: “This work sent to the Fedo abble Salzedas and DM M / III.º 50 10 5 "of the era». Ie this work sent to Dom Fernando, Abbot Salzedas, in 1465.

Father Fernando was elected abbot in 1453 and exercised his mandate uninterrupted until 1474. By order of this abbot was erected in 1472 a hospital near the bridge, to aid the poor and travelers.

Were the Cistercian monks who benefited from the bridge Ucanha, converted to an appreciable source of income for the toll charges that would be charged The bridge marked the entrance of the monastic Salzedas monastery Couto and served as a deposit of the toll payment that the travelers here delivered to transpose.

The bridge worked with the respective payment, practice only came to be abolished in the reign of D. Manuel I , in the year 1504. 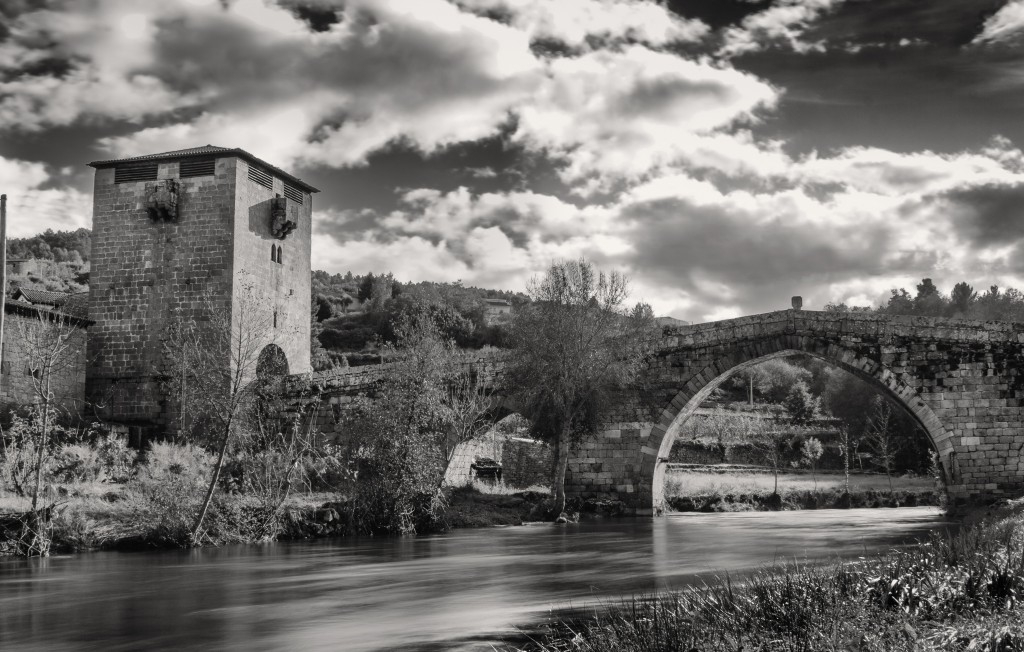 As already said the river marks the entrance of the old Couto Salzedas Monastery (*), which are still retained within their limits the unusual, ruins of the Old Abbey Salzedas, this case is unusual in Portugal, because they only have the base of the construction of the Romanesque church, It is abandoned by its construction unknown reason.

In the municipality of Tarouca, there are several old bridges that were built when the Cistercian monks settled in São João de Tarouca and Salzedas, as the beautiful bridge Little Village (*), very old bridge that is right in front of the old town of S. João de Tarouca and linking around the monastery to the village. Another still highlighted is to Mondim da Beira. That is the proposal of a beautiful landscaped historic route- the medieval bridges of the river Varosa.

According to José Leite de Vasconcelos, the illustrious son of Ucanha, the building of a bridge due to the following reasons:

1-defensive, now that protected the entrance to the monastic couto;

2- symbolic, it was a clear demonstration of the feudal power of the abbots Salzedas;

3- economic, it allowed the efficient toll collection rights. It would not last long since the dawn of the sixteenth century, were extinct, by general determination of D. Manuel I, as I said, rights Toll.

Description of the bridge Ucanha
The tower is a parallelepiped with 20 m in height and 10 m on each side of the base, is divided into three floors. The first cracks with; the second two sides open are two graceful twin pointed arch windows; the third vantage point that serious (Watch) has 4 matacães, supported by 3 cantilevers.

The tower is covered in tile, but there were times when he had no tower coverage. Some of the stones have some signs, as crosses with triangular base that are not acronyms, but, of course, symbols of faith of the people who recorded the. There are several representations of ordeals, with three crosses. It is the consecration of a dangerous place as it ever was crossing a river, even if there were a protected bridge, as in the case of Ucanha. On the other side, It has a door which is accessed by a ladder today in iron, but, other times, It should be wood. Barely begins to rise, just one of those stones is a sundial. The facade facing the village has two elements: a niche with Our Lady of the Castle and a little house with an inscription already mentioned (4).
Underneath the tower cuts it a vaulted tunnel forming an arc where circulating people and their goods.
Over the years, the tower must have had various functions: collection of tolls, Server defended, Pela is confirmed as the third floor features, It was perhaps manor house with sunny tower and may have been used as a barn convent. Today is transformed into a little place museological.
The bridge has a board easel, sheltered by high parapet formed by well-equipped ashlars. Based on 5 arcos ogivais, ruggedized upstream hoist by tides. The central arch, much broader than the others have a large bow.

The stones of this monument are so beautiful almost all sigladas, which gives authenticity and refers you to the mysterious and the organizational work of the masters beds.

"The middle of the bridge is placed Ucanha a mark with a cross and the date of 1865 and, the opposite side, another milestone that recalls the works of remodeling ' "The Ovens bridges, tables, Ucanha e Sancrou… He prepared us…”

The winegrowing village of Ucanha, village to visit

Ucanha, also formerly known village Bridge, It is one of six wine-producing villages. “In 2001 He was born the project of wine-producing Douro villages, in order to recover several villages in Douro Wine Region, by socio-economic revitalization, Fixing population, rehabilitation of public spaces, the promotion of popular culture, and strengthening the tourist promotion of the Douro.” (5)

The remaining five and they deserve our visit to be the most beautiful villages of the Douro region are: Provesende, Shipping, Trevões, Favaios and the Salzedas 3 km from Ucanha.

The village has developed due to the diligent collectors who moirejavam the tax affairs of Ucanha, but also has other interesting features beyond the bridge:

-Ucanha is organized linearly along the pathway of the bridge, an urban structure that betrays its origin. Today, the village is almost a line of houses that extends from either side of the narrow path, forming a sort of guard of honor for whom he circulated to compel the collection of the toll that the monastery was entitled. The houses adorn is wooden balconies, with the enhancement of the red, blue and green in his paintings. With exterior stairs have almost always two floors, whose ground floor is used for shops, designed primarily for agricultural use, while the second floor is for housing.

-the river Varosa, and here still raging allows for water mills, two of them next to the bridge, a river beach and the beautiful setting of unique beauty, accompanied by alders and willows, under a cloth fresh, Colorful and green;

-for its parish church, they built in the first half of the seventeenth century and externally to see little tem, its interior is beautiful with its nave covered by coffered painted with biblical scenes and its main altarpiece, in artistic gilded worked in the Baroque style. This church should be classified with municipal value.

-Ucanha is the location where he was born José Leite de Vasconcelos in 7 July 1858, and which he left too early. This is one of the greatest cultural figures of all time in Portugal, and that norteava hair rigor, serenity and depth in the analysis of issues.

"Graduated in medicine, devoted himself entirely to the social sciences, com thesis defended at the University of Paris, France. Bibliography imensa (over 1.200 securities), their studies, covering the history and archeology, the epigraphy and numismatics, Ethnography in Philosophy or indicate directions, conform the cornerstone and are the foundation of modern science in Portugal. Founder of Lusitana Magazine and Portuguese Ethnological Museum (today National Archaeological Museum (****) Lisbon), speaker, research, by theoretical research or fieldwork in its huge capacity and moral authority sparked, form of unfading, the light of contemporaneity in their homeland "2.
His immortal work, beyond the museum, perhaps the book Religions of Lusitania, an actuality that surprises. Published between the years 1897 and 1913 by Press the Mint of Lisbon, Lusitania's religions is the first monumental work of synthesis of the ancient religions of Portugal prehistoric and ancient, as well as one of the first of the Iberian Peninsula.

You can accessChi to this fantastic work.

Note: The black and white photograph was taken from the site of Tourism of Porto and Northern Portugal.