We confess, Noted that here in Portugal, have a especialpredilecção by peaceful Alentejo boroughs with its soothing silence and keeper recatos historical value. An example of this is Villa Crato, churches that still houses, manor houses and the castle ruins with architectural elements that still reflect an old opulence.
Here were the Carthaginians, Romans, Vandals, Mastiff; with the latter Crato was already bishop and his name was Castraleuca or Castra Leuca-that over the centuries and corruption, came to be called or Crate and Ucrate, por fim, Crato. In the year 582 again be taken, this time being the Visigoths their new masters. In the year 706 the Moors, in the fury of his victorious advanced throughout the Peninsula, seized her, getting on the field during Muslim 454 years, until in 1160, D. Afonso Henriques, conquered.
Here retreated Queen D. Leonor, The King of D-Viúva. Duarte, when 1440 courts rely regency Infante D. Pedro, during the minority of D. Afonso V.
Knights Hospitaller (of Malta) not Alentejo
In 1232 o rei D. Sancho II donated it to the Knights Hospitaller, shipping prior, Mem Gonçalves, which gave the town its first charter, in the same year. This Ordem, settled in Portugal at the time of D. Afonso Henriques, in Howard Springs, being its first prior, a brother of the king. However, D-time. Afonso IV, by volta of 1335, Master of the Order being D. Álvaro Gonçalves Pereira, its seat was transferred to the Crato, passing him and his successors to use the title of Prior of Crato. So, settled here, the capital of the priory that had twenty-three commendations and the following lands and their terms: Crato, Amieira, Belver, Cardigos, Carvoeiro, Serta, Envendos, Oleiros, Gáfete, Tolosa, Pedrogão Small and Proenca-a-Nova. The Grand Prior of Crato had spiritual and temporal power, with episcopal jurisdiction, why was not subordinate to any prelate. Prior of Crato broke with the knights of his Order, to take part in the battle of Salado. The components of the community, friars were batalhantes- warriors and monks- and had vows of humility, poverty and chastity, which did not prevent D. Álvaro be parent of thirty-two children. For installation of the Order, commands to build on the site of Flower Pink– the suburbs Crato- Monastery (***), which became, since, the seat of that Order in Portugal and sent reshape castles Belvis (**) and Alder Tagus (**).
Sun Alvaro was the father of D. Nuno Alvares Pereira, who played here and even perhaps born. From the sixteenth century the Order of the Hospital was renamed themselves the Order of Malta, name that still preserves. In 1512 the village had a new charter, given by the King D. Manuel. 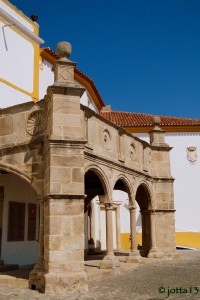 Among the successors of the father of the Constable, notabilizou if D-. Antonio, grandson of King John III and one of you intend to crown the death of Cardinal-King Dom Henrique and what became known in our history with the Prior of Crato.
An episode of the Restoration War that determined the fate of Crato
Episodically, in 1662, Crato fell to D. John of Austria, that lhe POS encirclement, finding, however, desperate resistance. Conquered the square, finally, it had a small garrison, were hanged by order of the Spanish general, governor and his sergeant-major. From this date the town lost much of its importance.
And what is today the town of Crato?
Crato today is a small village with houses, many nobles of seventeenth and eighteenth century, bars painted with yellow. Moreover, yellow tone predominates within its historical center and also in late spring in the meadows around. Journeying through its narrow alleys and cobbled floor, the eight-pointed cross will us popping here and there, witnessing the importance of the Order of Malta in the history of this region; is in this region that are the most beautiful monuments of this order in Portugal, with the exception of Monastery of Howard Springs (***), which are Monastery Flower Rose (***) e os Castles Belvis (**) e da Alder Tagus (**).
The royal wedding in Crato
As proof of our predilection, kings here celebrated the royal wedding of King Dom Manuel I to Dona Leonor (1518) and her fool son, Dom João III to Dona Catarina (1525), both sisters of the Emperor Charles V.
5 Places to visit in Crato.
-A famous balcony of the Grand Prior that was once part of the Palace, probably by the architect Miguel Arruda.
-The municipal museum of Crato is housed in the beautiful Palace of the Arches. It is a museum of great quality with multicore. Consult your website here http://www.cm-crato.pt/museu/museu.html
-A mother church founded in the thirteenth century, but deeply remodeled in the sixteenth century with an interesting filling that would point out a fourteenth century stone image of St. Bartholomew figuring, one fifteenth Pieta, an organ and the sixteenth-century Moorish-style tiles.
-The castle which is not visitable and the average age has little, because it was deeply transformed in the sixteenth century a fortress with bastions.
-A Chapel of Good Success Baroque purposely so that the prisoners cadeia, which it is placed defronte, could attend liturgical celebrations that it would be made. Harmonious Chapel, either the architecture or the decor, with the altar built entirely in marble.
Unfortunately Crato has some of its untapped potential not benefiting from tourists staying on Monastery Pink Flower (***). We give here as examples the castle closed since the very, the church closed die on normal days, non commercial use of its remarkable historic center, the lack of education and retraining of Anta Crato and the Roman town of Granja. And we even to visit one of the most monumental Portuguese dolmens- the tapir Tapadão (**), we had to jump the fence, enter private property and face very much afraid that acantonava taurine cattle in the vicinity of the tapir, ultimately, God gives the nuts who have no teeth.
Photo Credits from So that 13

2014 was the best year ever in tourism revenue in Portugal

Tourist Guide to Notable Places of the Municipality of Coimbra

Carrazeda Ansiães, Regions of Portugal, Distrito-Bragança, All articles
30 de May de 20118 of June of 2011