The Tourism Oliveira do Hospital has been systematically overlooked, however is a municipality with an interesting and diverse built and natural heritage, unfortunately has been a bit away from the tourist bustle of quality, however we present the list of their notable sights proves unequivocally that is one of the counties with the greatest potential of the district of Coimbra. This list and then placing articles of their notable sites in this space are just a hand in contributing to their dissemination so beautiful municipality.
Notable must-visit places in the Municipality of Oliveira do Hospital:
1-Panorama of Mount Colcorinho (Chapel of Our Lady of Needs) (***)
2-Mozarabic church of San Pedro de Lourosa (**)
3-Roman ruins of Bobadela (**)
4-Chapel of the Blacksmiths, attached to the mother church of Oliveira do Hospital(*)
5-Shrine of Our Lady of Prayer in Aldeia das Dez (*)
6-Valleys and Alva rivers Alvôco (*)
7-Historic Village of Grandfather
8-Panorama of the Balconies of Grandfather) (*)
9-Lagaretas the Sobreda (*)
10-Old inn of Santa Barbara in Póvoa de S. Cosme (*)
11-Medieval Bridge Alvôco of Varzeas (*)
12-Palheiras Fiais of the Border (*)
13-Anta of Arcaínha (IIP) (Pebble Border) (*)
14-Inn of the Convent of Desagravo (Little village of Beira) 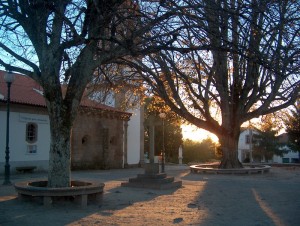 Gastronomy
Oliveira do Hospital is strongly influenced by the proximity of the Serra da Estrela, being the main dishes: roasted lamb, o borrego, the strands of pork Fashion Fair, carqueja rice with spare ribs, rice with edible mushroom, the mountainous feijoada, to lambicada, cod with bread and tibornada.
As for desserts, highlights the tigelada Oliveira do Hospital, cavacas of Aldeia das Dez, cream cheese with pumpkin and oil cakes