This central plaza Pinhel hides your real beauty to unwary travelers. For those unaware of the, know that there is a national monument: Manueline pillory Cage; three buildings in the Public Interest: Church of Mercy with a fine Manueline portal, the Church of St. Louis (which highlights the chancel Mannerist, com art tiles camélia, coffered ceiling and two small tables of beautiful sixteenth-century Portuguese painting representing Baptism of Christ and the Beheading of St. John) and the old Town Hall, that houses the municipal museum. The beautiful solar brasonados Mena House of falcons (stayed where Queen Catherine of Braganza) and Casa Grande are classified as Concelhio Value. The remaining buildings(s) long (s) also have equity interest. In total six buildings classified in the same square.
The entire set of irregular plan, is uneven in three levels, chaotically landscaped, allowing not search the monumentality of the broad.
Happily, that the set consisting of the Casa Grande and the old Town Hall will be transformed in the future into a cultural space. There are also projects to convert the House of Mena Hawks to serve the Town Hall. 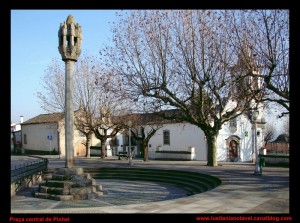 In 2005 a proposed redevelopment would make the square Pinhel in one of the most beautiful in the country was presented. In relation to the project, consider the secondary underground parking and disagree with the total elimination of trees. What it would make sense, would relocate some of them and create a green space micro, leaning against the wall to the north, creating an intimate resort, aromatic and refreshing from the warm summer here it is felt intensely. I would add a statue of a renowned author, the historic Queen Dona Catarina, that after thirty years of his reign in England (and that after the death of King Charles II was ruler of that mighty empire). Entered the city on 31 December 1682 and was housed in the Mena Solar Falcon.
If all these interventions were performed- and as Sir Anthony says, Barber square, make this space, like the beautiful largest Spanish plazas.