The Vale to Vilariça has an area of ​​approximately 34.000 hectares, constituting a small alluvial plain of 5000 hectares, the bank that gives YOU the name, and rises to about 25 kms in Sierra Posts.
The Vale to Vilariça corresponding to uma mega active fracture, that runs through the district of Bragança towards N / S, provinda from Galiza and que se prolonga hair distrito to Watch. This failure has widened in the lower reaches of the river and the river Sabor Vilariça. Is this great structure that forces the Douro to give a whimsical meander in Quinta Vale de Meão (the fifth a few years ago produced the most famous red wine from Portugal (Barca Velha) (*).
A Rebofa to Vale to Vilariça
When the flow of the river Douro is greater, prevents water from flowing into that river Sabor. It is the backflow of river Sabor allowing sedimentation of nutrients in the valley making it very fertile- it rebofa. The regularization of course Douro, first with the breaking of Cachão Valeira in the late eighteenth century and more recently with the construction of dams, has decreased the intensity of rebofas last.
The Valley has great agricultural productivity Vilariça
For centuries hemp cultivation dominated the valley of Vilariça, decreasing its importance after the mid-eighteenth century, with the closure of the Royal Trading Post hemp linens and the development of silk culture. From there are cereal crops and vegetables intensively occupying the attention of the farmers of the plain. 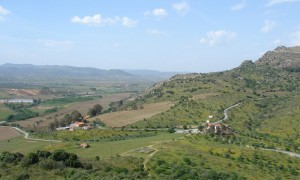 Are famous, although increasingly forgotten, melons, "Carrasco" and "Lagarto", regional varieties derived Valley.
Although here and there to see if some tracts of vineyard, This spreads over- such as almond, the olive and orange trees- the slopes that flank the valley. The productivity of land is remarkable Vilariça, allowing the financial relief of the people of the Municipality of Mirandela.
Great archaeological wealth in the adjacent cliffs Valley Vilariça
Vigorous granite cliffs border the Valley Vilariça and its top, bollards in, deployed are several prehistoric villages: Baldoeiro (*), Santa Cruz the demolished, Castle Mine, Lady of the Castle in Adeganha (*), they all rich in archaeological remains. These "settlements", sometimes inaccessible to ordinary tourists, men gather beautiful panoramic views of the valley, with its large geometric plaid green fields.
But there is a big but this beauty. On hot summer days moist heat becomes unbearable, and shadows are scarce. The unhealthiness of summer in the past should have triggered the demand of the populations of these abandoned villages; this may also explain that the population of Santa Cruz Derruída has moved, and founded another location, in the Middle-Ages Mirandela – More defended the ague.
At the mouth of this valley, defronte to Mount MEAO, Meander vast Douro, a sheet of water that makes us forget our existence and that drags us into a strange melancholy; depart here with the certainty that this depression, is an oasis of greenery in the parched fertility and stripped Tras-os-Montes. It is one of the beautiful corners of Portugal.