Vale do Tua (Carrazeda Ansiães and Alijó) (***) - We let them destroy this natural wonder of Portugal (1ªparte) ?

The valley Tua is our!

Is the granite in its terminal part of the valley Thy acquires its full beauty due to wild canyon that the river carved with time and water, the two largest natural modelers; a people with such wealth, should be grateful, to honor and defend it at all costs. But here comes the threat of destruction moved by the power of money and party dictatorship in which we are subjugated. For our part we will do everything in gutter, so this does not happen and we will be involved in all actions, whenever the available. These items are only a small contribution to the salvation of the Tua Valley. 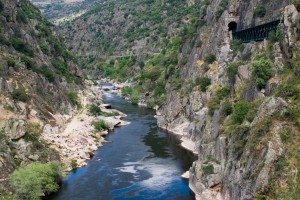 I have sincere appreciation for Francisco José Viegas, for their importance in literary dissemination and always had such good person. It is obvious that Mr. Secretary of State for Culture has two hypotheses regarding the Tua Valley:
-fight until the end and give evidence of their feud in the media and in government succeeding even be fired, making this issue an important personal factor – and rises like a human being;
-and then falls in absolute disbelief as a person who is sold to pirates costume and deserve our contempt. Here is what the still benign Francisco wrote about the purpose of the film Dam Stop, Look and listen, more words for what?
“It is not only a portrait of the Tua line as well as a reflection on the past 3 decades of history of Tras-os-Montes. I would like to point out a movie scene, where Tras-os-Montes is compared with a rural area of ​​Switzerland. In one sees empty fields and trains to fly despite the beautiful landscape, another Veems up fields laced with liberal Macieira (with Portuguese immigrants in Switzerland to pick apples), and trains full of tourists also enjoy the beautiful landscape. What investments will have a more profound impact in a rural region: Agriculture / tourism or a dam?
The IGESPAR think the Tua Line has no relevance as cultural heritage rating. In other words, Archeological has no "value, architectural, artistic, scientific or technological and industrial ". Probably, is there any reason in its arguments. A part of it will be under water when the EDP build a dam at the mouth of the Douro Tua. The IGESPAR can decide and give opinions on the subject - but it should not disappear arrange for one of the most beautiful Portuguese landscapes - that could be seen and impress your visitors. The landscape (the Tua included) is one of the most important Portuguese heritage. Concrete, highways and dams have been destroying it. The Portuguese believe that the landscape is crazy thing do not live in this world; their world is a paranoia "1

1-Francisco José Viegas ... before Secretary of State for Culture
Reading - Books & Readers, nº 97 - December 2010, p. 27
Some texts on the internet about the importance of the Tua Valley
http://ogalaico.blogspot.com/2011/03/paisagem-miguel-torga.html

2 Comments Vale do Tua (Carrazeda Ansiães and Alijó) (***) - We let them destroy this natural wonder of Portugal (1ªparte) ?