"I AM the last of environmentalists, “green”, or something similar. I always had a great distrust with ecologists positions and a huge skepticism about the backgrounds of its arguments. I was not very sensitive to “pictures that could not swim”. I am skeptical on the movement, speeches and demagoguery about “global warming”, transformed into a vague anti capitalist ideology and anti-industrial, ignoring that our development model, predator that is, e é, nevertheless guarantee a minimum quality of life for billions of people who could never reach that threshold without spoiling part of nature often without regard, weight, not measured. I suspect the catastrophic rhetoric with “global warming” and I'm on the side of Bjorn Lomborg in his arguments against the environmentalist demagoguery that has become a politically correct discourse in recent years, while the richest countries and the only ones who can control something predation of nature, precisely because they are rich and can afford this luxury China, India and Brazil can not.
Said, I placed in the blacklist of environmentalists – already in the European Parliament, Vasco Graça Moura and I were on the list of least “green” Members of -, 'll terçar the fragile arms of opinion the cause of the Tua line and, By extension, the Alto Douro wine region and what is not Vineyard, but just as beautiful little Portuguese thing remains. And this means that I believe that is a real crime and a blunder, unfortunately with a solid tradition of other blunders behind, build the dam planned for the Tua line.
What we have in the valley of Tua, the river, o false, the railway line, the balance land, Water, the scarps, vegetation, Wind, the harsh loneliness, Today is unique in Portugal. In other words, No more. One ends up with the Tua Valley and with the exception of some river stretches, much smaller scale and without the harsh Tua, there is no longer anything similar anywhere. We are diligently to end up with another of those coupons, the Flavor, so just spare Thy. 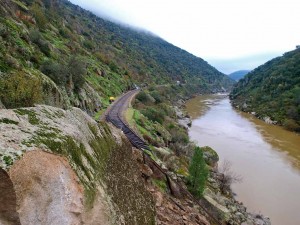 I also had the privilege of walking in the Tua Line (as in Corgo, also enclosed) and it was an unforgettable trip, that will surely be a must tourism in any amateur station, popular in countries like the UK and the U.S.. A “composition” was a mixture of old recycled railway equipment, which included Spanish and Italian and Yugoslav machines of years wagons 30. The line was not so tourist, or anything like that, but a normal railway line, serving normal traffic, people of the land and villages in which they train the only means of transportation that existed. It was a world of the past, was perceived by all, by slow, by route, that the world was ending behind stations with names and sound Germanic barbarians, or Christian saints.
But the valley was worth the Tua Tua, a beautiful place, where the sheer heat of summer, or the awakening of spring or the first rain of autumn faziam earth smell the earth, a urze, the thousand and one Mediterranean scents that today only know from books, when we read the classics. In a very different and distant site, met the same smells and the hot silence disturbed only by beetles and a gentle wind and dense. In Turkey, beside the old ruins by digging, somewhere in the interior of Anatolia, well into the ancient Ionia. It is the same country, the same land, the same story, the same ancient homeland in Fez. Men were alive as Orlando Ribeiro, and they would tell us the links that we are breaking, not the past, but with the present and with ourselves.
Portugal is a country that has intensely destroyed its natural landscape in recent years, has a high density of dams and each dam to the north is a river valley which disappears. The summits of the hills are already full of wind, and almost can not look anywhere around a high point, even in natural parks, without seeing artifacts placed before our eyes in the last 20 years. We do not know, for example, what a dark night, and so the Homeric astonishment at the sky and stars is an experience that has “not assist in”, to rest their feet on the ground where we truly live, the mouth of trivia.
I know that part of this destruction was inevitable and is part of a difficult trade-off between economics, melting riqueza, resources to explore, and the environment, but, as we are reaching the limits of all – latest vouchers, last mountains, last Landscapes -, that trade-off sold out on its potential, and today is a disadvantage whose costs will pay off in the near future. Children who are born today will live in a world dominated by light pollution, of urban chaos, ill-amanhadas illegal construction and no natural landscape. Will never see the Milky Way except in photographs, do not know what a wild river valley except in American films, never will smell the heather, not even know what a broom, not have the wind in your face on top of a mountain, without this bringing tarnished brand in the world of junk that begins just a few meters below, never see an oak, never eat a trout without being farmed, not know what the silence “inhabited” that changes the hearts of men who know how to listen.
It, therefore, their relationship with the world is, departing, much poorer and never understand thousands of pages of literature in your language, nor Camilo, nem Eça, nor Aquilino, or poets who speak of things which are to them as far away as herbs, shrubbery, flowers and fruits, that are not in the suburbs hypermarket. Are losing the language, destroyed happily between the SMS and the Agreement Checker, and increase the overall difficulty reading and understanding of any text that has words not included in the dominant guttural vocabulary.
A EDP, that greets us with a new image (How many millions spent and for what?) and a slogan Viva our energy!, will be sold on behalf of the end of the state in the economy, either a Brazilian or Chinese state company, that certainly is a damn about what remains of the natural landscape in Portugal. I can almost swear that, in conversations cabinet that NOBODY escrutina, and accompanying privatization, our “flexibility” (a word of today's times) to accommodate the package being valued dams to raise the price of the company. Among these is the valley of Thy.
Therefore, combat the barrage that will destroy the valley Tua became a last resort fight, one last chance to have another landscape than eucalypt, artificial reservoirs, beaches overbooked, mountains esventradas for quarries, in most cases illegal, but the work before the eyes of all decades, num já too ravaged Portugal.
We are therefore Numa last frontier, if it has not gone beyond ".
(Release Public of 10 December 2011.)
http://abrupto.blogspot.com/2011/12/estragar-o-pouco-que-resta-eu-sou-o.html

Regions of Portugal, Distrito-Coimbra, Tourist Guides, Penela, All articles
25 of March of 20111 from April to 2011

7 Tourist Wonders of the county Penela