I Campina full Algarvia, Perth from Estói, lies one of the most important Roman sites in Portugal. For a long time it was believed that Milreu would be the city of Ossonoba (where he is currently Trail), but after all we were in the presence of a lavish Roman villa, founded as a rural house in the first century, transformed in the following century and increased in the third century AD; the space occupation continued until the sixteenth century with the proof of this period cottage which exploited the fertile lands of Algarvian, located between the coast and the Monte Figo (***)- one of the beautiful miradouros of Portugal.
Archaeological finds from Villa Milreu
A villa Milreu have a length of several tens of hectares. Archaeological excavations have revealed significant archaeological finds. How magnificent mosaics depicting the marine environment, Jackets marble Extremoz, Century III and IV d.C., with oriental taste that, sometimes, covered the entire surface of a room, Decorative ceramic, magnificent imperial busts…some of this estate is dispersed and should be concentrated here.
The walls of the finest rooms in the house were surrounded by beautiful marble shaped pilasters, topped by Corinthian capitals, or naturalistic elements.
In the intermediate spaces, plastered walls received the paintings made fresh: geometric compositions or paintings of naturalistic inspiration simulated idealized landscapes. The location is the first, In most cases, in footnotes and only rarely in other areas of the walls or vaults. Even today in Milreu, you can see some traces of decoration.
Spaces for visitors to the Villae, as the atrium, or peristyle, OS Jardins, sources, ninféus the spa and were often decorated with carvings. 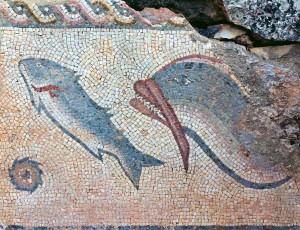 The building would have to be someone very important and powerful, who knows the imperial family, for here met magnificent imperial busts (*): a da bela Agripina, a Jovem- mother of Nero, Century I; to the great emperor Hadrian (*), século II; and the most beautiful of all, a do Emperor Gallienus (*), século III, great psychological density, perhaps tormented immense physical pain or psychological. The first two are in Museum of Faro (**) and that of Gallienus, alone by itself is worth a visit to the museum Dr. José Formosinho in Lagos (*).
The Roman villa had a central courtyard with a peristyle 22 white marble columns, with central tank and garden. Around the peristyle-up feature large rooms: the dining room (triclinium), familiarity, reading, and game. All these divisions contains beautiful Roman mosaics.
I draw attention to a beautiful mosaic pavement (**), on the east side of the peristyle, with a magnificent and unforgettable dolphin with eyes muzzle, holding a cloth purple, perches fat silver, reddish fatty fish, a squid- admirable expression, with mesmerizing eyes.
Dolphins and the color purple
Several dolphins represented and they hold a strip of purple- interestingly the pigmentation was obtained from molluscs. The color is the symbol of strength and courage of the Roman blood and that life for the Catholic Church; the imperial purple was used by the Roman senate, whose members wore togas that color. With the end of the Roman Republic and the rise of the empire, only the emperors to use. Nero came to impose a death penalty on anyone who dared to use color. Dolphins by his benevolent air were a sacred animal in ancient and symbolize wisdom, goodness and prudence. Today, very close, sailing in Algarve waters, near the barrier islands of Ria Formosa Natural Park and be with them, in their midst, is a unique pleasure. The visit is taken from here. 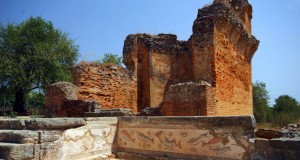 Along the dining room of (triclinium) is the access to the spa frigidarium, tepidarium e caldarium, with waiting room with seats. Beneath worked furnaces for heating. Measured in whole 32×31 I faces the west and follow the directions of Vitruvius for bathing facilities, letting in his wings in the warm sunlight of poente.
The fish frigidarium (*)
The decor is magnificent tanks, and is associated with the worship of water. For example, the little tank frigidarium, fish represented are overly bloated. This attribute is intentional, as viewed in water, by optical illusion, simulated not only swim, as its dimensions were reduced to normal. The mosaic wall coverings are rare in Portugal and yet are here, on the podium nymphaeum and several tanks.
The most beautiful Roman temple of Portugal (Ninfeu) and the Council of Nicaea
It is notable that, mas which stresses this site is the magnificent temple (sanctuary) dedicated to the worship of water (ninfeu).
Whoever enters repairs immediately in its large size and its high degree of conservation, because it remains the bottom and part of the brick walls, with emphasis on the imposing apse, where one also observes traces of the surrounding gallery. There are many interesting sites to see this well-preserved ruin, but the traveler soon notices the mosaics decorating conserved along the staircase to the podium. Are brown and light gray fish-size and two dolphins, one on each side. The fishes swim among other smaller marine life. Overall, These mosaics were a wall frieze of almost 50 meters with a beaded, at the top and bottom, shaped braided band. This frieze around the podium is unique in the Roman world and was the wall surrounding a pool. The temple was dedicated to aquatic deities (ninfeu).
Transposed the gate rises by a staircase of three steps to the podium level, with 1,20 meters. The cella with the floor and the walls covered with polychrome marbles would be luxurious and beautiful. 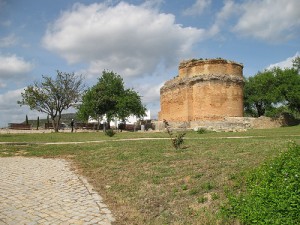 Strangely the date of construction of this building will, in the second half of the third century ie after the Council of Nicaea, in 341, and 346, because from that date the authors of pagan sacrifices began to be punished with the death penalty- was therefore, implemented authoritarian rule of Catholic doctrine.
How is it possible and who would be the important Roman patrician, we still managed in adverse times construct this time pagan precepts?
Very close to the magnificent Faro Quinta do Marim (***) sede do Ria Formosa Natural Park e em Are Cucufate (***) (Vidigueira), in the vicinity of rustic villages, are also similar buildings, but on a smaller scale.
From the sixth century, the temple was transformed into early Christian basilica has a period in which this important Roman villa fenecia and all the superb Roman Empire was in decline. The temple was Christianized in the fourth century. In the courtyard of the shrine is possible to see a Christian baptismal pool (*) on a grave.

But the story does not end here because inscriptions discovered in the eighth century tell us that the temple was adapted by a Muslim shrine Family muladis (Christian converts to Islam) name Al Hâmmu. From the tenth century, whole structure is abandoned.
In the sixteenth century, on the ruins of a Roman building, long-abandoned, was erected a house – unique and precious Algarve exemplary of this type of civil architecture with cylindrical buttresses fortified, with small slits for firing. Inside there is a large Roman mill, which is not fully exploited and also beautiful mosaics. In the area of ​​the house there was a pars rustica, where there are still dolias (talhas) in situ.
Are still affixed to explore many of the early-century buildings, because they have newer buildings superimposed.
The members of the town were buried in the vicinity of the houses but outside the housing area. In Milreu several burial sites were placed and you can see the ruins of a sepulchral building with podium, for placement of urns.
Very close to the historic inn Palácio de Estói (*) well worth a view.
In paradise Algarvia climate Algarvia was built, probably one of the most spectacular Roman villas of the Iberian Peninsula. And is water in its symbolic interpretations main actor; she is the source of life, means of purification and center regenerescência. Diving in the waters, for delas emergir, is refreshing our soul, replenish us an immense reservoir of energy that endows us with the strength to continue our labors. It's also why we love the Algarve; and since the pools and tanks nymphaeum, baptistery and spa are droughts and heat it is time to go to the paradisiacal beaches Ria Formosa Natural Park.
5 Notable Roman temples of Portugal
Temple Almofala (Figueira de Castelo Rodrigo) (*)
Temple of Diana (Évora) (***)
Temple of San Cucufate (Vidigueira) (*)
Time Roman Capitol of the Roman city Miróbriga (***) (Santiago Cacém)
Temple's Castro Orjais (Our Lady of the Head) (Covilha) (*)

Bibliography:Ruins of Milreu, Estói (Algarve), “Scripts of Portuguese Archaeology”, IPPAR and Ministry of Culture
Credit-photographic Some photos are the Days of the Kings

21 Wonders of the cuisine of Portugal 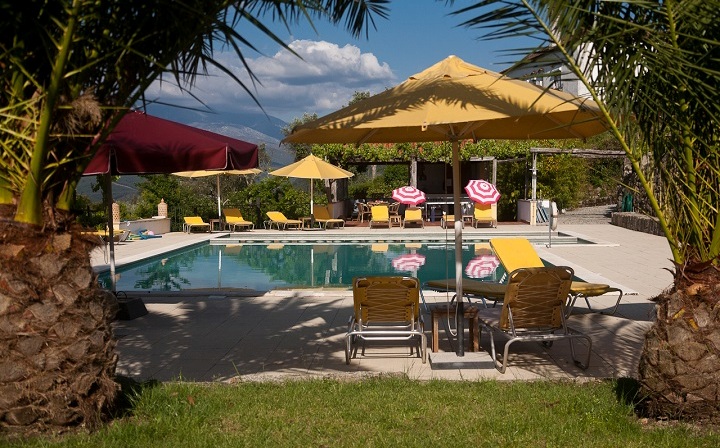 Outstanding Accommodation, Regions of Portugal, Distrito-Coimbra, Oliveira do Hospital, Remarkable Restoration, All articles
10 from April to 201424 December of 2014

Romanesque Route of the Valleys of Támega, Sousa and Douro